Saturday will be a busy day for fans of Improvised Music.  Not only is bassist Joe Fonda presenting the 9th Annual Composers & Improvisers Festival at The Buttonwood Tree in Middletown but also Real Art Ways, 45 Arbor Street in Hartford is hosting its monthly "Improvisations" series with the incredible reed master Scott Robinson joining series curators Stephen Haynes (trumpet) and Joe Morris (bass, guitar).

The evening at The Buttonwood commences at 7:30 p.m. with the duo of Clare Daly (baritone saxophone - pictured left) and Joel Forrester (piano). The 2 have had a long musical relationship with the saxophonist being a member of the pianist's "People Like Us" quartet.  Forrester, a founding member of The Microscopic Septet (4 saxophones and rhythm section), is a fine composer but this setting allows the 2 to stretch the improvisatory muscles.

Saxophonist Charlie Kohlhase (alto, tenor and baritone saxes) brings his Explorers Club Trio for a set at 8:30 p.m.  Joining the Boston-based musician will be Eric Hofbauer (guitar) and Curt Newton (drums) - neither one is represented in the photo above.  Kohlhase, who first came to critical notice as a member of the Either/Orchestra, has led his own groups since the late 1980s, recording in various settings but always with a strong component of improvisation.  Guitarist Hofbauer has also led or co-led several ensembles in the Boston area but may be best known for his trio of solo releases "American Vanity" (2002), "American Fear" (2009) and "American Grace" (2012), 3 recordings that blend standards with rock favorites and originals.  Drummer Newton has recorded and toured with saxophonist Ken Vandermark, pianist Pandelis Karayorgis and cornetist Taylor Ho Bynum.

Topping off the Festival will be the Michael Musillami Trio at 9:30.   The Trio, consisting of Mr. Musillami (guitar), George Schuller (drums, percussion) and Festival founder Fonda (bass), is soon to celebrate its 12th anniversary and it's been quite a wonderful musical experience.  They have recorded 6 CDs (all on the guitarist's Playscape Recordings label), several of which feature an expanded lineup - the music they create is always exciting, original, challenging and rewarding.

As mentioned above, reed player Scott Robinson (pictured left with a  bass saxophone) is the featured guest at RAW's "Improvisations" event, also on Saturday but starting at 7 p.m.  Robinson, who has been a mainstay of the reed section in Maria Schneider's Orchestra since its inception in 1992, has also worked with numerous musicians and ensembles, from Joe Lovano to Anthony Braxton to the Duke Ellington Orchestra to The Temptations to the New York City Opera.  He's an amazing soloist, a musician who can raise the roof with a mighty roar and create lovely sounds that whisper in one's ears.  He should have quite the time playing with Messrs. Haynes and Morris, who both enjoy the challenge of "instantaneous music." 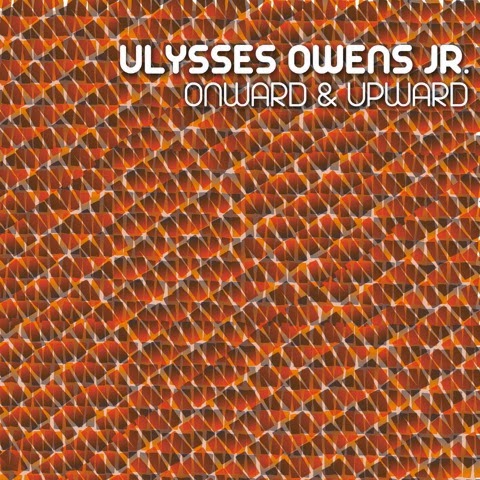 Drummer Ulysses Owens Jr., a native of Jacksonville, Florida, has made quite the name for himself over the past 5 years.  He has toured and recorded with vocalist Kurt Elling, bassist Christian McBride, and vocalist Diane Schuur.  He has just issued his 3rd CD as a leader, "Onward & Upward" (D Clef Records) and it's no surprise that the music in the program covers a wide swath of styles.  With a rhythm section of Christian Sands (piano, who also is a member of bassist McBride's Trio), Gilad Hekselman (guitar) and Reuben Rogers (bass) plus a front line of Jason Palmer (trumpet), Michael Dease (trombone and co-producer) and Anat Cohen (tenor saxophone, clarinet), the music commences (after a short drum intro) with a funky reading of Thom Bell's "People Make the World Go Round" (first recorded by The Stylistics in 1971) - the track features a great vocal by Charles Turner III and a strong horn arrangement.  That's followed by another r'n'b tune, "Just 25 Miles to Anywhere", composed and recorded in 1983 by the late Phyllis Hyman (1949-1995), also produced by Thom Bell. The fine arrangement, by saxophonist Diego Rivera, caresses the melody while leaving room for solos by Ms. Cohen, Hekselman, Palmer and Sands.  "Human Nature", a big hit for Michael Jackson, is mainly a spotlight for the sumptuous piano work of Sands with bassist Matthew Rybicki joining Owens, Jr in the rhythm section. The bassist, originally from Cleveland, Ohio, is also featured on the lovely original ballad "The Gift of Forgiveness", a feature for young trumpeter Benny Benack III.

Ms. Cohen moves to clarinet for the exciting "Samba Jam", a spontaneous composition for her, bassist Rogers and the leader.  She also has a fiery tenor solo on "SST", a piece by the team of Frank Buchanan and Kurt Stockdale.  Oddly enough, she's not in the ensemble for the atmospheric reading of Wayne Shorter's  "Fee Fi Fo Fum", which does feature excellent work by Palmer, Hekselman and the leader.

"Onward & Upward" closes with the leader playing a funky rhythm by himself and building a solo off the groove he creates.  Save for the opening and closing tracks, Ulysses Owens Jr. has created a group recording that allows all the participants to shine without anyone stealing the spotlight.  His choice of material is inspired with an emphasis on strong melodies, good grooves, and "hot" solos. Best of all, the music jumps out of your speakers and, for the majority of the CD, makes you want to move your feet.  The project is dedicated to the memory of Mulgrew Miller, the pianist whom Owens Jr. describes as "my mentor."  For more information, go to www.usojazzy.com.
Posted by Richard B. Kamins at 7:16 PM