Firehouse 12, 45 Crown Street in New Haven is back in business, the concert business that is.  The Spring 2014 season commences this Friday (March 21st, the first full day of Spring) with the Ben Allison Trio.  Bassist/composer Allison, a proud son of New Haven, issued his first self-released CD, "The Stars Look Very Different Today" (Sonic Camera) in late 2013 with a quartet featuring guitarist Steve Cardenas, drummer Allison Miller, and guitarist/banjo picker Brandon Seabrook.  Sonically, the recording contains some of the most dense music the bassist has ever recorded with Seabrook being the wild card.  That writ, there are several strong ballads including the banjo-led "The Ballad of Joe Buck" and the harder-edged "No Other Side" (the blend of Cardenas's more mellow sound with Seabrook's electronically altered 6-string is quite attractive).  There's a raucous re-arangement of Allison's "Swiss Cheese D" (first recorded on 2001's "Riding The Nuclear Tiger") that slashes and dashes, churns and burns (the title of the song comes from the repertoire of New York Knicks' commentator Walt Frazier.)  Overall, it's one of Ben Allison's strongest recordings.

For the New Haven gig, the bassist is bringing a different lineup, one that I'm not sure he has ever performed with in a live setting.  Cardenas, who has now appeared on Allison latest 5 recordings, will be on the gig and the third member of the Trio is trumpeter Ron Horton (pictured left).  Horton was a charter member of the New York City-based Jazz Composers Collective and appeared on the bassist's first 4 CDs as well as being part of the JCC's Herbie Nichols Project.

The opening set is at 8:30 p.m. and the second begins at 10 (separate admission charges for each).  For ticket information, call 203-785-0468 or go to firehouse12.com.  To learn more about Ben Allison and his music, go to benallison.com. 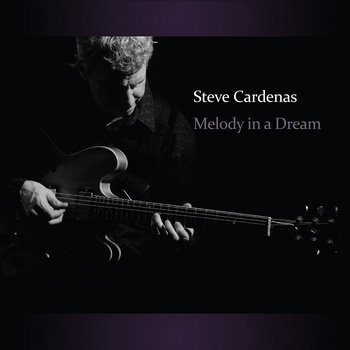 Guitarist/composer Steve Cardenas has a brand new CD, his 4th as a leader and 2nd to appear on Sunnyside Records. Although there is no dedication on the album jacket, "Melody in a Dream" sounds like a tribute to Paul Motian (1931-2011).  The guitarist recorded 4 CDs with the late drummer/composer/bandleader, 3 as a member of the Electric Bebop Band.  Cardenas has also worked with bassist Charlie Haden, vocalist Elaine Elias, drummer Joey Baron. an is prominently featured on fellow guitarist Anthony Wilson's delightful "Seasons" project.

On this new project, Cardenas works with a splendid rhythm section of drummer Baron, bassist Thomas Morgan (who also worked with Paul Motian), and, on 3 tracks, trumpeter Shane Endsley.  Upon first listen, what stands out is the crisp percussion, the excellent guitar accompaniments and Morgan's impressive bass work (he is so melodic).  Baron does not imitate Motian but his work on the CD's ballads remind one of the spare style that his elder was well not for (it's shown to great example on tracks on the opening 2 tracks, "Just One More Time" and "New Moon", both Cardenas originals.  The blend of guitar and bass (who is often playing counterpoint) is impressive throughout. The bluesy strut of "Ode To Joey" adds the trumpet to the mix - the piece shifts tempo several times but Baron's drumming guides all through the changes with no problem.

The program features a pair of Motian compositions, the sweet ballad "Once Around The Park" and the loping medium tempo of "In The Year of The Dragon." The late drummer's compositions have such fascinating melodies (quite singable - I'm surprised there are so few with lyrics);  On "..Park", Morgan builds his solo off the theme and it really sparkles. There is a hint of Bobby Troup's "Route 66" in the melody of "...Dragon" - still, it's a subtle gesture on a program filled with subtleties.

There is a quartet of "standards" programmed one after another starting with the Victor Young/Sam Lewis 1932 classic "Street of Dreams" (the Trio performs the piece ever so slowly) moving to an up-tempo take of Lee Konitz's "Subconscious-Lee" (Endsley takes the lead and his bright tone works nicely with the muted sounds of the guitar.) Horace Silver's classic "Peace" is transformed into a gentle samba (the mix makes Baron's excellent percussion stand out as do Morgan's fine counterpoint phrases)  which leads into a guitar/drums reading of Thelonious Monk's "Teo."  Cardenas's crisp lines and harder sounds are a fine foil to Baron's crisp snare, splashing cymbals and thumping bass drum.

Don't approach "Melody in a Dream" expecting to be blown away by musical pyrotechnics or long, convoluted, solos.  Take your time with this music, enjoy the fine drawn interactions, the sounds of the instruments, the various melodies and how the musicians explore these songs.  The albums Steve Cardenas has created over the past decade show a musician who digs into songs to mine them them for their myriad possibilities and we, the listeners, are the benefactors of his musical research.  To get a taste of this fine recording, go to sunnysidezone.com/album/melody-in-a-dream.