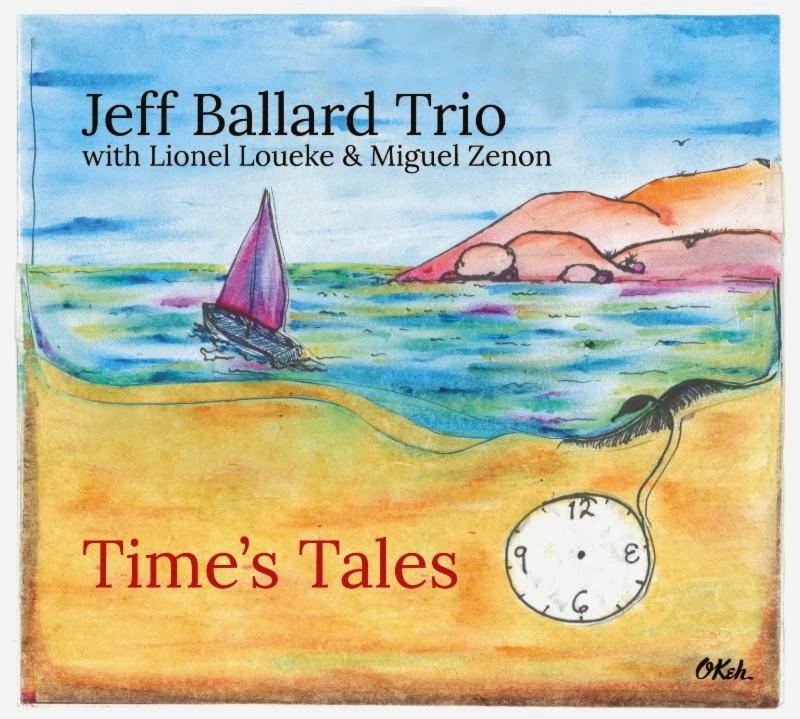 Hard to believe that "Time's Tales" (Okeh Records) is drummer/ percussionist/composer Jeff Ballard's debut as a leader. Fans of creative modern music know the California-native from his work in pianist Brad Mehldau's Trio and his co-operative trio FLY (with Mark Turner and Larry Grenadier.  Over the past 2 decades, the drummer has worked and recorded with pianists Danilo Perez and Chick Corea as well as in Joshua Redman's Elastic Band.

For his debut CD, Ballard has created a trio (only seems natural) with  guitarist Lionel Loueke and alto saxophonist Miguel Zenon. Over the course of 10 tracks (57 minutes), the music moves around the globe, with stops in Africa (Loueke's "Virgin Forest" which opens the album),  New Orleans (the drummer's composition "Beat Street"), Cuba ("El Reperador de Suenos" from the pen of Silvio Rodriguez - it's one of the prettiest pieces on the disk), Tin Pan Alley (the Gershwin brothers' "The Man I Love", featuring an emotionally poignant solo from Zenon) and, perhaps the biggest surprise, the hard rock sounds of Queens of the Stone Age ("Hangin' Tree", with Lionel Loueke delivering scorching riff after riff.) Zenon holds his own on the last tune mentioned, playing with great fire as Ballard flails beneath the solos.

One can hear that this session is no "one-off", that the trio has worked together on numerous (in fact, since 2006) and, that while each one of them is a leader, this is a true group effort. The music goes in so many directions because these musicians have played so many different styles and bring such great ideas to the sessions.  "Dal (A Rhythm Song)" is based on a piece by Bela Bartok featuring a lovely saxophone solo over strong hand drumming and sparse yet effective guitar work.  The guitar and saxophone play the fascinating melody of "Western Wren (A Bird Call)", actually adapted from a recorded bird call, together (Loueke playing very high notes) and then spar over the active brush work of Ballard.  Two improvisations fill out the program, the short (:47 seconds) "Free 1" and the longer, much more involved "Free 3" that is the final track.  "Free" improvisation can be daunting yet the trio move the piece organically over the martial beat and staccato saxophone riffs.

Jeff Ballard may have waited until he was 50 before releasing his debut as a leader - for those of us who have enjoyed his efforts over the past 20 years, the wait was worth it and the results highly enjoyable.  "Time's Tale" is a joy to listen to and deserves your attention. For more information, go to www.jeffballard.com.  The Trio will be on a European tour in February and at selected venues in the United States starting in June of this year. 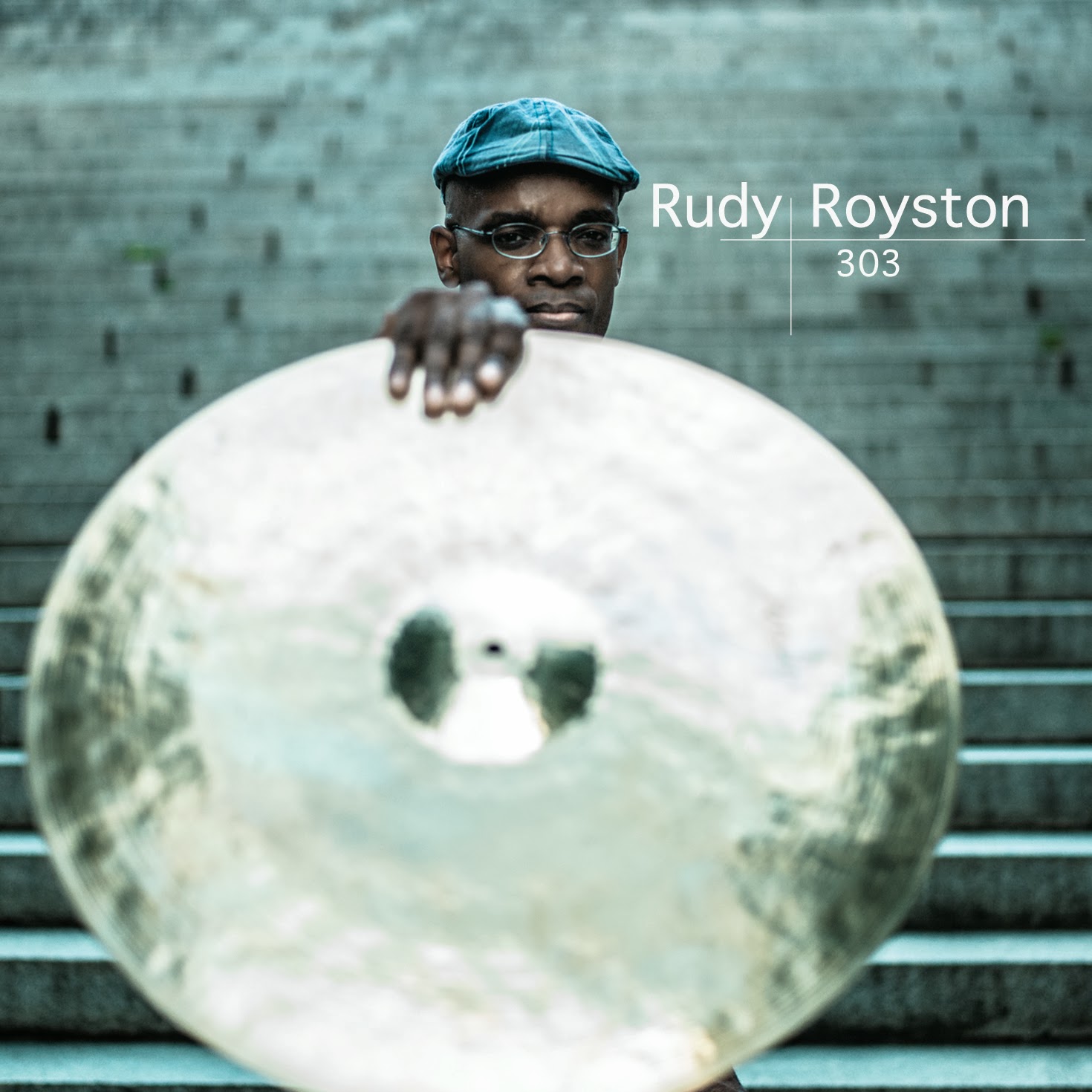 Rudy Royston, born in Texas and raised in Colorado, is one of those drummers music listeners gravitate to.  He's an exciting, unpredictable, forceful yet gentle player.  He has worked to great effect with trumpeters Ron Miles and Dave Douglas, guitarist Bill Frisell, and saxophonist JD Allen.  Royston is an in-demand session player and now, with the release of "303" (Greenleaf Music), a leader.

The album, named for the zip code in the part of Colorado where Royston spent his formative years, features a septet with Jon Irabagon (saxophones), Nadja Noordhuis (trumpet), Nir Felder (electric guitar), Sam Harris (piano) and Mimi Jones plus Yasushi Nakumura (basses).  The music, all but 2 of the 11 tracks composed by the leader, is surprisingly soulful, especially the haunting rendition on Mozart's adaptation of a Eucharistic hymn "Ave Verum Corpus." Royston's quiet brush work and cymbal splashes color the strong saxophone work of Irabagon (he and Royston work together in Dave Douglas's Quintet). The other non-original is Radiohead's "High and Dry", with bass chords supporting the atmospheric guitar and the leader's hard-edged drums. It's quite a handsome melody and this version builds on it without losing the vision of the original.  There's a feel of "Philly soul" in the sounds of "Prayer (for the people)", a short piece featuring strong bass work from Ms. Jones (I believe), good piano from Harris and a horn arrangement that suggest s but not copies Abdullah Ibrahim.  Felder, whose debut was recently released on Okeh, is a sparkplug throughout the program.  His quiet and soul-stirring phrases lead the way into "Goodnight Kinyah" while his long tones and clicking rhythm underscore the horns and piano on "Mimi Sunrise."  His rippling lines soar over the driving drums and overdubbed percussion on "Play On Words", a piece with echoes of Miles Davis's mid-1960s Quintet, whereas "Miles to Go (Sunset Road)" has a funky Caribbean feel in the chunky guitar riffs and Royston's patterns.  The hypnotic interaction of Irabagon's tenor and Ms. Noordhuis's trumpet is soothing as the piece fades.

To his credit, Rudy Royston has made a "group" recording, not a CD built around his drum solos.  He does step out on several occasions, especially on the fiery climax of "Gangs of New York" (Felder matches his intensity) and on the up-tempo romp "Bownze" (featuring a great sax solo and strong work from the bassists.)  There are moments when the music has the sound of Brian Blade's Fellowship or the afore-mentioned Miles Davis Quintet.  "303" is a solid debut for Royston, featuring an ensemble that can should mature as it plays in live settings (where the drummer usually does his finest work.) For more information, go to www.rudyroyston.com. 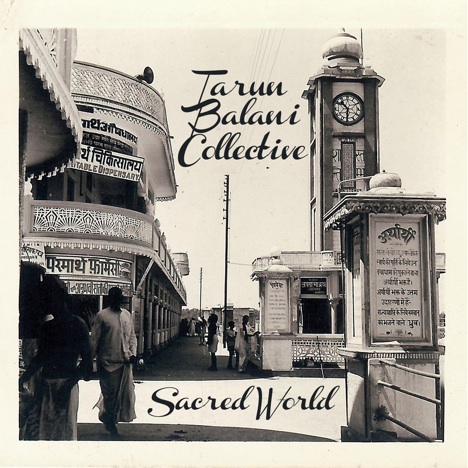 Tarun Balani is a drummer/composer born in India who first came to New York City to study with at the Collective School, then went up to study with Ralph Peterson, Jr. and Jamey Haddad at the Berklee School of Music before moving back to India to form the Global Music Institute in New Delhi.  His debut CD, "Sacred World" (self-released), was recorded in Mumbai and issued there in 2012.  It's now out in the United States and well worth your time.

His ensemble, the Tarun Balani Ensemble, features his brother Aditya on guitars, Sharik Hasan (piano), the veteran bassist (and Berklee instructor) Bruno Raberg plus Suhail Yusuf Khan (sarangi on 3 of the 8 tracks with vocal on another 1).  If you do not listen closely to the opening 2 cuts - "Belief" and "The Other Side" - one would think that the program was going to be influenced throughout by the work of The Pat Metheny Group, circa 1980. The Metheny sound is noticeable in the textures and certainly in the chordal patterns of "Belief."  Suhail Khan's first appearance is on cut #3, "Azaan", which opens with acoustic guitar tuned differently than a Western guitar;  then Hasan and Raberg play a unison melody joined after a moment by the guitar leading up to Khan's vocal.  The pace is different, the percussion (once Balani enters) taking on a more melodic part interacting with the piano and vocal.  Aditya Balani switches back to electric guitar on the next track, "Pictures", and that Metheny/Mays influence returns but is less reverential. The title track is a long ballad, built from a handsome unaccompanied nylon-string guitar introduction.  One by one, the other musicians (save for Khan) enter starting with Raberg's melodic bass, then Hasan's resonant piano work and finally the cymbals.

The final 3 tracks adds Khan's sarangi, an ancient Indian stringed instrument that sounds like a violin.  One can hear clearly on "Varsha" the fusion hinted at in the earlier tracks plus Balani' approach to the drum kit changes, the bass drum becoming more prominent and the the rhythms played on the snare and tom have more of an Eastern feels.  The CD closes with "Arjuna" and "Arjuna Reprise" which continues along the lines of fusion of East and West.  The tracks are actually on long performance, the first part featuring a powerful electric guitar solo followed by Hasan's more rhythmic piano spotlight (the pianist is an excellent musician, with a rich sound on his instrument).  After a reiteration of the theme, the pieces changes to a slower pace for an unaccompanied piano solo -  that leads to a long, crackling, drum solo over insistent piano chords and a descending bass line before the rest of the group returns to the formal theme.

The power inherent in the music on "Sacred World" grows with each listen.   One moves past the influences and begins to listen to the interactions of the musicians, how they connect with each other, and how melody and rhythm are front-and-center throughout.  Tarun Balani has created quite an impressive work of art; one is curious to hear how his music will grow, expand and mature.  For more information, go to tarunbalani.wordpress.com.
Posted by Richard B. Kamins at 9:28 PM