The New Year has arrived and it's time for new musical experiences.  The "Improvisations" series at Real Art Ways, 56 Arbor Street in Hartford continues to impress with the width and breadth of the collaborations that co-curators Stephen Haynes (trumpets, cornet) and Joe Morris (guitar, bass) have brought to the performance space.  This Sunday (1/12), percussionist Satoshi Takeishi (pictured) brings his unique talents and fascinating array of items to be struck, shaken, caressed and finessed.  The Japanese-born Takeishi, whose brother Stomu is a world-class bassist, studied at the Berklee School in Boston and then spent 4 years in Colombia studying and performing Central and Latin American music.  For the past quarter century, he has played and/or recorded with numerous creative musicians including bassist Marc Johnson, percussionist Ray Barretto, Anthony Braxton, cellist Erik Friedlander, guitarist Rez Abbasi and many others.

Looks like the weather will cooperate this weekend so you should have no problem making the 3 p.m show.  For more information, go to www.realartways.org or www.facebook.com/pages/Improvisations/324014434279441. 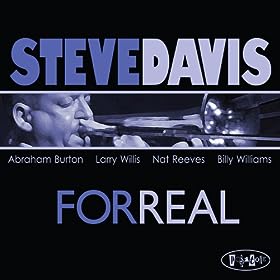 Any recording by trombonist/composer/educator Steve Davis is a reason to celebrate.  A 1989 graduate of the HARTT School's Jackie McLean Institute (at the University of Hartford), Davis has performed with Art Blakey, Chick Corea, Christian McBride and so many others, especially the collective One For All.  He's also served on the faculty of his alma mater since 1991 as well as working with Hartford's Artist's Collective.

"For Real" is the title of Davis's 4th release for PosiTone Records and an apt description of the man himself.  Though he can play with great fire, Davis eschews histrionics in favor of a smooth, steady, tone and music that builds from solid melodic lines and a strong chordal structure.  Joining him for this date is long-time associates Larry Willis (piano) and fellow HARTT faculty member Nat Reeves (bass), McLean Institute graduate Abraham Burton (tenor saxophone) and the fine young drummer Billy Williams.  Right off the bat, the title track reminds this listener of the sounds of the Jazz Crusaders with its funky blend of 'bone, tenor sax and piano. Burton is a strong soloist, blending the drive of John Coltrane with the bluesy explorations of players such as Booker Ervin and Hank Mobley.  Willis, the 71-year old native of Harlem (New York City), is, at turns, playful, wistful, swinging, and always melodic.  On the rousing "Tactics" (all the songs on the CD are Davis originals save one), the pianist's solid chords give Reeves the freedom to fly while Williams supplies the drive.  Willis's impressionistic chords open the handsome ballad "I Found You" with its 2-part melody line - his graceful solo unwinds freely over the classy foundations supplied by his  partners in the rhythm section.  The trombonist's solo blends short phrases with longer, sweetly flowing lines. Brazilian rhythms underpin the sprightly closing track "Daylight", giving the soloists a springboard for imaginative and hard-driving explorations.  Burton's joyful romp builds off the energy created by Willis's ebullient solo.  The leader picks up on the dancing quality of Reeves' bouncy bass lines and Williams's enthusiastic percussion, delivering a sweet melodic statement.

Yes, "For Real" is just that - "real" music that is as exciting as it is entertaining.  Steve Davis connects with his audience on a number of levels, his honest approach to his art refreshing and certainly enjoyable.  For more information, go to www.stevedavis.info.

On Saturday January 11, the Uncertainty Music Series continues at 8 p.m. in Never Ending Books, 810 State Street in New Haven, with solo sets by Landon Knoblock (synths, keyboards) and series curator Carl Testa (electronics). Knoblock, whose latest recording features saxophonist Oscar Noreiga and drummer Jeff Davis (collectively known as CACAW), creates music that takes from all genres to create an aural stew that is often noisy as well as melodic. His solo music is multi-layered, with pieces such as "She Called Them Tributes" that blend the fire of Art Tatum with the electronics of Wendy Carlos.  Knoblock has a playful edge (give a listen at www.landonknoblock.com/solo-piano-audio) where anything goes, keeping the listener guessing. Carl Testa, whose impressive 2013 solo CD "IRIS" blended his bass playing with electronics, also has a playful edge and will keep you guessing as well.