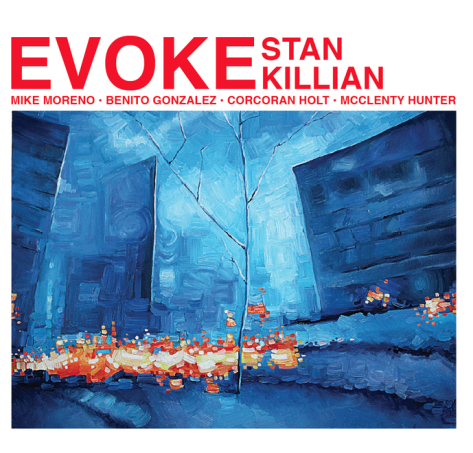 Tenor saxophonist/composer Stan Killian, born in Texas and now residing in New York City, shows strong development on "Evoke", his second recording for Sunnyside. His own playing is measured, thoughtful yet with moments of true excitement. I like his melodic side where one can hear his saxophone "singing" but he can also get fired up during a solo (as is evident on the CD opener, "Subterranean Melody.")  These 7 pieces, written and arranged for a quintet featuring Mike Moreno (guitar), Benito Gonzalez (piano), Corcoran Holt (bass) and McClenty Hunter (drums) cover a lot of territory, from the quiet soul of the title piece to the joyous swing of "Kirby".

One can hear that this band spent serious time with this material, especially when you pay attention to how each musician works within the song.  Groups that have both piano and guitar don't always blend the 2 instruments as well as Killian does here. On the playful "Echolalic", Gonzalez plays smartly beneath Moreno's solo, alternating between chords and single-note runs to support the guitarist.  His own funky solo is a treat.  The exciting riff that opens "Observation" gives way to a finely structured piece that moves forward atop the excellent work of Holt and Hunter; the composer's sense of dynamic variation and the rhythm section's execution is impressive.  The straight-ahead swing of "Beekman33" is relaxed yet opens up to a fiery tenor solo, a bluesy guitar spotlight and a very playful piano groove.

Stan Killian was wise to bring his working band into the studio to record "Evoke."   Their understanding of the material and their relationship to the composer allows this music to breathe;  this is not just another "blowing session" where the 5 musicians can display their impressive chops but a well-tempered meeting of colleagues open to any and all ideas.  For more information, go to stankillian.com.

Here's some of the fine music on "Evoke", courtesy of Sunnyside:

Pianist Aruan Ortiz and bassist Michael Janisch first met as students at The Berklee School of Music in Boston, Massachusetts.  The Cuban-born Ortiz has been a busy musician, touring the world and making a series of recordings that show his maturity as a composer and improviser,  Janisch, born in Wisconsin and now a resident of London, is not only an in-demand musician but also the head of Whirlwind Records which, in the first several years of existence has released a number of fine CDs from artists such as trombonist/vocalist Nick Vayenas, trumpeter Ralph Alessi, guitarist Phil Robson, saxophonist Patrick Cornelius and drummer Jeff Williams.  Ortiz and Janisch formed their Quintet in 2011 for a tour of Ireland, France, Spain and the United Kingdom culminating in "Banned In London" (Whirlwind Records) recorded in November of that year at the Pizza Express Jazz Club in London. Besides the pianist and bassist, the Quintet includes French trumpeter Raynald Colom, American drummer Rudy Royston and special guest Greg Osby on alto saxophone.  The 5 tracks, all over 10 minutes long, include 2 originals by the pianist, 1 by the bassist and extended versions of Fats Waller's "Jitterbug Waltz" and Thelonious Monk's "Ask Me Now."  What is good about this intelligent recording is that the songs all have good melodies, not just riffs to blow over, and that the soloists have the time to explore different moods within their solos. For example, Osby leads off the Waller piece unaccompanied, an abstract expression of creativity that moves "inside" to lead the band in.  Royston's martial drumming, Ortiz's bluesy splashes and Janisch's strong counterpoint, all work well under Osby and Colom's reading of the recognizable melody.  The saxophonist builds his solo off both the melody and Ortiz's chords while the piano solo opens with rippling phrases leading to an extended solo rumination.  Listen to the active bass and drums beneath the solo;  they continually move the piece forward and push the pianist.

And, the true joy of this music is how the rhythm section reinvents itself during the course of these "long" songs. After the formal opening of "Orbiting" where all 5 of the musicians contribute to the theme (Royston, one of the best drummers on the planet at this time, really "moves this piece.)  Both Janisch and Royston can stop on a dime, can change direction and intensity in a flash so, as you listen to this music, hear what they do under the soloists. On this particular piece, they really fire up Colom as he flashes through his solo and then, as the applause dies down, they take it easy as Ortiz begins his long dissertation, pushing at the pianist as the solo moves forward until the music explodes.  Then, it's the drummer's turn and he does not disappoint. Yes, he's got the chops but there is such spirit in his playing.

"Banned In London" is filled with exciting musical moments, making one wish he was in the front row of the concert. Greg Osby is the perfect foil for the pianist's more abstract ideas, playing with fire and confidence throughout.  Raynald Colom is also a good foil in this band, his interactions with the rhythm section a excellent example of how give-and-take works in the concert setting.  I have already praised the woro of Rudy Royston - if you ever get a chance to hear him live, do not pass it up. To their credit, Aruan Ortiz and Michael Janisch have not re-invented creative post-bop music as much as reinvigorated it.  Play this CD good and loud; much joy can be had while the walls shake.  For more information, go to www.aomjquintet.com.
Posted by Richard B. Kamins at 9:50 AM