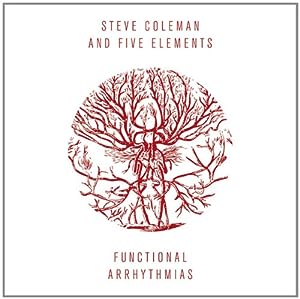 Continuing his quest to meld improvisation and composition, melody and rhythm, alto saxophonist and composer Steve Coleman has released, what I believe, is one of the best recordings of his career. Paring his Five Elements ensemble to 4 musicians (Coleman, trumpeter Jonathan Findlayson, bassist Anthony Tidd and drummer Sean Rickman plus guitarist Miles Okazaki on 5 of the 14 tracks) has served to focus the composer's study "of the connection between the biology of the human body, the human soul, and music" which he discovered through his relationship with percussionist Milford Graves.

The 14 tracks that comprise Coleman's 3rd release for Pi Recordings "Functional Arrhythmias" bristle with creativity, with splendid musicianship and and impressive interplay. On top of that, much of this music has an irresistible rhythmic feel that induces smiles and the desire to move one's body, dance music for the entire person. Finlayson, who has also worked with guitarist Mary Halvorson, saxophonists Ravi Coltrane and Steve Lehman (among others) possesses a clear tone that meshes well with the leader's fluid lines and warm sound.  The work of Rickman and Tidd, who both return to Coleman's band after a decade away, has to heard (and felt) - it is the "heartbeat" and the "flow" of this production.  It's no surprise that the first sounds you hear on "Sinews", the track that opens the CD, comes from the rhythm section, the thick bass notes and funky drumming.  All through this music (all original), the drums catch your ear.  From the Ed Blackwell-influenced rhythms of "Cardiovascular" (the majority of the titles reference bodily functions and parts) to the fiery propulsion of "Snap-Sis", Rickman brings the beat.  For his part, Tidd throbs, bounces, bobs and weaves, plays phrases that go "way low" and move "up high."  His counterpoint of "Respiratory Flow" and his dub-like grooves on "Assim-Elim" serve to cushion the melodic interplay of Coleman and Finlayson.  Yet, they, too, play with rhythmic drive in their phrases, whether it's the bounce of "Hormone Trig" or the James Brown-inspired grooves of "Cerebellum Lean" the front line gets into the groove.  On the latter track, Coleman's solo is so slippery and feisty and he manages to incite the soul without wailing.

Finlayson is also an equal partner in the success of the music.  His playing is forthright, he not only executes the melody lines with style but his solos are built with intelligence and wit, whether he's riffing off the percussion (as he does so gracefully on "Medulla-Vagus") or building off of a phrase or fragment he hears in Coleman's solos (so brilliantly displayed on "Limbic Cry").

Miles Okazaki makes his presence felt on the 5 tracks he appears on; there's his West African-inspired "clacking" rhythm guitar on "Cardiovascular", his funky interactions with Tidd's bass lines under Rickman's spright;y drumming on "Irregular Heartbeats" and his understated Nile Rodgers-like solo on "Adrenal, Got Ghost."  His acoustic guitar sounds re-tuned, kora-like, on the mysterious yet funky "Lymph Swag (Dance of the Leukocytes)" - again, how he interacts with Tidd stands out as do his inventive, blues-soaked riffs beneath the solos.

Listening to "Functional Arrythmias", I am reminded of Ornette Coleman's 1959 Atlantic recording "The Shape of Jazz To Come."   With the exception of the 5 tracks with guitarist Okazaki, the instrumentation is the same, the differences being Charlie Haden's acoustic bass instead of Tidd's electric and Don Cherry's cornet for Finlayson's trumpet.  Billy Higgin's insistent drum and cymbal work may not be as multi-rythhmical as Sean Rickman's but it drives the music in the same manner (and the modern recording is much brighter.)  Both recordings can be said to be "music of its time" yet both seem timeless.   The 2 groups, separated by more than 5 decades, play with purpose, fire, and joy. I'm not sure either of the 2 Colemans get enough credit for how the rhythms in their music are so playful, elemental and essential (in the case of Ornette Coleman, especially in the music he and the group created for Atlantic Records).

Simply put, "Functional Arrhythmias" shines brightly - find it, play it loud and play it often.  For more information, go to www.m-base.com or www.precordings.com.
Posted by Richard B. Kamins at 7:53 AM