Trombonist, composer, band(s)leader, and educator Ryan Keberle is the very model of a 21st Century musician.  His trombone playing feels at home in Latin music ensembles, alongside contemporary songwriters such as Sufjan Stevens, leading his quintet Catharsis, or in ensembles led by Dave Douglas.  It's no surprise that on a trip to Brazil in late 2017 that he would hook up with a fine trio of local musicians; even better, he returned six months later and recorded with these musicians. 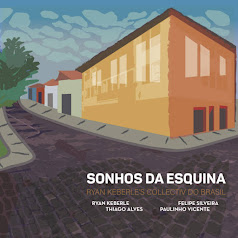 The results can be heard on the exciting and expansive "Sonhos Da Esquina" (Alternate Side Records).  Credited to Ryan Keberle's Collectiv do Brasil, the trombonist and the trio––Felipe Silviera (piano), Thiago Alves (bass), and Paulinho Vicente (drums)––examine three compositions from Milton Nascimento, two from Toninho Horta (a contemporary of Nascimento), and three by Keberle.  One can hear the influences of Brazilian MPB, of Wayne Shorter's 1975 recording "Native Dancer", and hints of Pat Metheny's explorations into World Music, especially in the movement of the rhythm section.  Even so, pieces such as "Clube Da Esquina 2" and "Aqui, Oh!" move in ways that you can hear their origins. The latter tune, originally composed by Horta for Nascimento (1969), takes off from the beautifully expressed original melody (in rubato) into a lovely samba rhythm. Both Keberle and Silviera take fine solos that handsomely swing over the activity of the rhythm section.

Several of the pieces come from Nascimento's self-titled second album such as the afore-mentioned "Aqui, Oh!" as well as the lovely ballad "Tarde" (words by Nascimento, music by Márcio Borges). The latter song sounds to this listener like it could have been composed by Duke Ellington or Billy Strayhorn––the trombonist and pianist create emotionally strong solos.  "Clube Da Esquina 2" is the title track of a 1972 double album Nascimento made with singer-songwriter-guitarist Lô Borges that many consider a landmark MPB recording for its variety and myriad styles.  The softer ballad opens with a bass solo that introduces the main melody with Alves plays in unison with Keberle.  The piece gains in power as it moves forward but never loses its melodic aim. 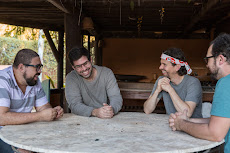 The album closes with Horta's "Francisca" which Nascimento recorded for his 1976 album "Milton". It, too, is a ballad (at least, for the first 2/3rds of the tune), also quite emotional; this version features excellent melodic and contrapuntal playing from bassist Alves plus he creates a splendid solo. That's followed by an appropriately mellow piano.  Note how the tempo picks up as Silviera is playing so that when Keberle takes off on his solo, the rhythm is quite powerful.
"Sonhos Da Esquina" ("Corner Songs") is a delightful journey into Brazil with Ryan Keberle's Collectiv Do Brasil.  Thoughtful, passionate, and melodic music that reaches deep into your soul. Listen closely.
For more information, go to http://ryankeberle.com.  To hear more and to purchase the album, go to  https://ryankeberle.bandcamp.com/album/sonhos-da-esquina.
Hear the Milton Nascimento-penned opening track: 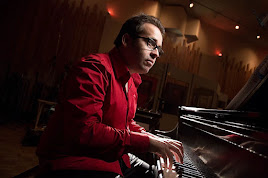 Two decades into his professional career, pianist, composer, arranger, and bandleader Manuel Valera is hitting his stride. His 2020 release "Jose Marti En Nuevo York", was his first big band album as well as his debut on Greenleaf Music.  That album combined poetry, politics, folklore, and a splendid original score.  As you can see from the personnel listed below, the 20-member plus vocalist ensemble dubbed the New Cuban Express Big Band is filled with A-list musicians from New York City–the blend of Jimmy Macbride and Samuel Torres on drums and percussion is nothing short of magnificent. 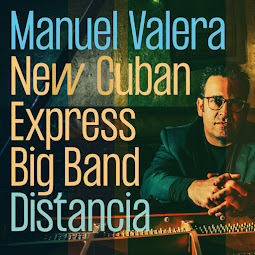 "Distancia" is the big band's second album. Although there is no "theme" that unites the program, the eight Valera compositions all stand out. Whether it's strong construction of the compositions, the fiery rhythms, the excellent section writing, or the fine solos, this music should grab your attention from the get-go and not let go.  The opening track, "Expectativas", is the title track of the New Cuban Express's 2013 release (its second)––here, like there, the band jumps out with the melody shared by the brass and reeds (the lead bounces back and forth. The leader's piano keeps the music on an even keel and kudos to bassist Hamish Smith for his free-flowing lines built off the piano chords. The lush melody and harmony lines of "Gemini" really sing yet the rhythms remain exciting.  There are several splendid solos including one from trumpeter Stuart Mack plus the baritone sax spot for Andrew Gutauskas and the leader's jaunt over the drums, percussion, and bass. 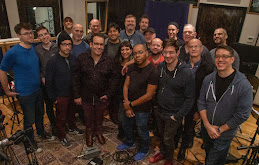 Camilla Meza joins the band for "From Afar", her wordless vocal supported by the reeds and guitar with the many colors of the brass. Valera layers the reeds and the brass behind the voice then steps away for a long and excellent solo from trumpeter Michael Rodriguez.  When she returns, her voice is joined by the saxophones while the trumpets respond. Ms. Meza joins the the alto sax of Remy LeBouef and Valera's roller-coaster piano figures to lead the band into the medium-tempo "Pathways".  Moments later, it's the flutes with the voice, then the muted trumpets, then the sections push the entire ensemble to the solo section with contributions from Jeremy Powell (tenor saxophone), bassist Stuart, and drummer Macbride. 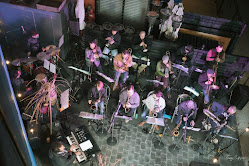 In the long run, it's the melodies and performances that will bring you back to "Distancia". The title track (listen below) has a lovely and emotional melodies that touches the heart. The stunning soprano sax solo (Charles Pillow), the powerful trombone work (Mike Fahie), the lovely wordless vocal from soprano Bogna Kicińska, and the gentle rolling rhythms lull one into a peaceful space.
The album closes with "Remembered" but instead of the song being an elegy, the piece leaps in on the guitar of Alex Goodman plus the snap and crackle of the percussion. The middle of the piece opens for strong solos from trombonist Andy Clausen and trumpeter David Smith before the entire band dances towards the finish line.  Run don't walk to grab "Distancias", easily one of the finest large ensemble albums you'll hear this year. The New Cuban Express Big Band shines throughout thanks to the great music and arrangements of its leader Manuel Valera––kudos all around!!
To hear more and to purchase the album, go to https://manuel-valera.bandcamp.com/album/distancia.
Hear the title track:
Tracks:
1) - Expectativas
2) - Gemini
3) - From Afar
4) - Pathways
5) - From the Ashes
6) - Impressionistic Romance
7) - Distancia
8) - Remembered
Personnel:
VOICECamila Meza, voice (3, 4)Bogna Kicińska, voice (7)TRUMPETSBrian Pareschi (lead)Michael Rodriguez (3, 5, 6, 8)Stuart Mack (on all except 5 & 8)David SmithAlex Norris (on all except 3 & 6)SAXESMichael Thomas, alto sax, soprano sax & fluteRoman Filiu, alto sax & flute (3, 5, 6, 8)Remy Le Boeuf, alto sax & flute (1, 2, 4, 7)Joel Frahm, tenor saxophone (3, 5, 6, 8)Jeremy Powell, tenor saxophone, clarinet (1, 2, 4, 7)Andrew Gutauskas, baritone saxophone & bass clarinetTROMBONESMatt Macdonald (lead)John Yao (3, 5, 6, 8)Mike Fahie (1, 2, 4, 7)Andy Clausen (3, 5, 6, 8)Sam Blakeslee (1, 2, 4, 7)Jeff Nelson, bass tromboneRHYTHM SECTIONManuel Valera, pianoAlex Goodman, guitarRicky Rodriguez, bass (3, 5, 6, 8)Hamish Smith, bass (1, 2, 4, 7)Jimmy Macbride, drumsSamuel Torres, percussion
Posted by Richard B. Kamins at 9:00 AM