Pianist, composer, and arranger Ryan Cohan has returned to the recording scene seven years since his last recording "The River." Not that the Chicago, IL-born-and-raised (and still lives) Cohan has been idle––he's appeared on a slew of recordings plus has been commissioned to write scores for several films, orchestras, and artists.  Cohan, before the pandemic, still played throughout the United States as well as conducting clinics for high school students.  And, he's been composing music for a story that has been gestating for a decade. 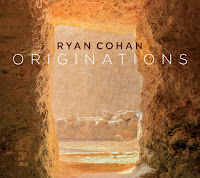 The music for 2013's "The River" was inspired by a tour that took Cohan to Africa. The new album, "Originations" (his debut on Origin Records), has its inspiration in Cohan's reunion with his long-estranged father who lives in Jordan.  Even before meeting the paternal side of his family, the pianist felt comfortable walking the streets of the Middle-Eastern country. One can hear that in the music he's created to tell his story. The melodies and rhythms of the music point to that part of the world; his blend of reeds and string, the strident and piercing trumpet, the hand percussion plus the string quartet illuminate his ideas, bringing the experiences to life. 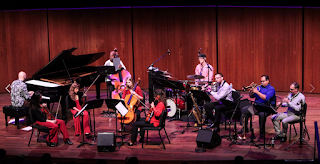 Even though Cohan does not bill "Originations" as a suite, the six-song, 51-minute, program certainly feels like one.  The subtext of the music is the composer's coming terms with his parentage and his background, and how the music bridges the gap between countries in the region, doing so without an overt agenda.  As he has worked with and recorded with most of these musicians in the past (save for the KAIA String Quartet plus percussionists Michael Raynor and Omar Musfi), he knows how to write for their "voices"––listening to the ensemble maneuver through the tricky rhythm patterns on "Imaginary Lines", one can hear their familiarity with the material and Cohan's trust in their ability. The "dancing" piano lines that open "Sabra" may remind some of the music of Third World Love, the quartet featuring trumpeter Avishai Cohen and bassist Omer Avital.  The sensuous strings and bass lines create a flow that is enhanced by the excellent drumming and the use of Geof Bradfield's bass clarinet to shadow the bass lines. The leader's dazzling solo is framed by the hand percussion and the shimmering strings. One can hear the influence of maqam (Arabic melody modes) on this piece (and other songs). The lovely ballad "Heart" is graced by a lovely flugelhorn solo from Tito Carrillo––listen to how the clarinet and bass clarinet, trumpet, and strings move around behind the piano solo.

The final track on the album, "Essence", is also the longest (12:27). The opening 90 seconds spotlight the individual voices of the string quartet––when the full band enters, the music begins a fascinating journey with melodies springing up out of the rhythmical forward motion. A lengthy solo by John Wojciechowski (flute) leads to a drum break, then a restatement of an earlier theme, this time with a few more textures. There is a quick break then Cohan takes off on an wide-ranging and dizzying solo over the bass, trap drums, and hand percussion. One hears Latin beats mixing with Middle-Eastern; as the intensity increases, more voices come to support the percussion until the music comes to an abrupt climax.  Makes you want to go back and listen again.

And you should listen again to "Originations."  Climb onto the rhythms, cling to the melodies, savor the arrangements, and, after a while, you fell that the emotional richness of the music stands out. Over his career, one that spans two+ decades, Ryan Cohan has been known for his great technique on piano. Listening to his three previous albums on Motema plus here on his Origin debut, you can really hears how he's grown as a composer and arranger as well as a storyteller.

For more information, go to ryancohan.com.  To purchase the album and read more about the project, go to originarts.com/recordings/recording.php?TitleID=82804.

Guitarist and composer David Gilmore, a native of Cambridge, MA, has been active on the contemporary music scene for over two decades. He's worked with artists such as Robin Eubanks, Mavis Staples, Boz Scaggs, Me'Shell Ndegeocello, Joss Stone, Ronald Shannon Jackson, Wayne Shorter, Don Bryon, and many more. As a leader, he's issued six albums, his latest just out o Criss Cross Jazz.  "From Here To There" was recorded in September of 2018 but, due to label head Gerry Teekens illness and subsequent death in late October 2019, its release was in limbo. 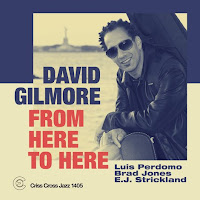 Happily, his son and grandchildren have released the album, Glmore's second for the label, as tribute to Teekens. Gilmore assembled a dynamite ensemble––pianist Luis Perdomo, bassist Brad Jones, and drummer E.J. Strickland (the only holdover from his label debut, 2017's "Transitions"––giving them 10 pieces (eight Gilmore originals plus one piece each from Sam Rivers and Bill Evans) and let them loose.  There's tremendous energy in this music, songs being propelled by the top-notch rhythm section.  Jones, who plays both acoustic and electric basses, joins with Strickland and the two of them really drive the music.  You hear it almost immediately on the opening track, "Focus Pocus"––when Perdomo unites with the duo, the results are powerful. They push Gilmore into a thoughtful yet powerful solo. The drummer gets a spotlight in the middle before the pianist heads into a joyous romp. 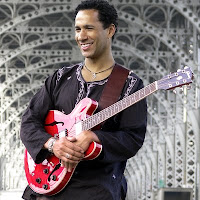 The quartet kicks up the volume for "Metaverse", with Jones on electric bass while the guitarist and pianist play a melody line that reminds one of John McLaughlin's Mahavishnu Orchestra.  The guitar solo rises out of the melody, trading choruses with the piano, pushing the intensity higher throughout as the two joust and parry. "When and Then" has a funky feel (listen to Strickland and Jones create such a mighty groove) and both Perdomo and Gilmore stretch out. "Free Radicals" breaks out of the gate, cymbals splashing, into a well-constructed melody line. The pace is quite fast but never feels rushed, the solos hard-edged but always melodic. The Evans tune, "Interplay", is a fun blues with a hint of classical influences in the melody line. Jones (on acoustic bass) gets the first solo, his graceful, melodic, side balanced with his powerful phrases stand out. Sam Rivers "Cyclic Episode" (from his 1965 Blue Note Lp "Fuchsia Swing Song") really does swing. Pay attention to Strickland as he accents throughout the solos until he gets to "trade 4s" with Gilmore.

The leader take out his acoustic guitar for the handsome ballad "Child of Time", a piece that balances quiet melodic passages with moments of intensity. Gilmore's articulate lines rise above the rhythm section, his solo displaying great emotion as well as technical dexterity.

"From Here To Here" brings joy for several different reasons.  The music displays leader David Gilmore's continuing maturity as a composer and a player plus he's got one heck of a band supporting, prodding, pushing, and framing his music.  It's great to have Criss Cross Records back and one hopes they'll continue to support the artists and their music!

For more information about the recording, go to www.crisscrossjazz.com/album/1405.html.  To find out more about David Gilmore, go to www.davidgilmore.net.