Every year at this time, I take stock of my life and the health of the United States of America. For every person who tells you that America has become greater in the past two years+, there's another who says that the freedoms of this country are disappearing through the authoritarian actions of a corrupt government.  And I will wager that, every year since the beginning of this nation, that's an argument  that has been waged.  And will be waged long after my grandchildren have their own grandchildren.

I watch my students grapple with these issues plus ones of identity politics, racial discrimination, economic disparity, studying for jobs that are disappearing and not being trained for the new ones that are being created - these students are, mostly, freshmen, and they realize early in their first semester, college or, honestly (in most cases), being away from home for the first time is both frightening and liberating as well as the first real opportunity to stretch and become themselves.  They hate to make mistakes even though that's how most of us learn what's important.  They respect their teachers but much of the respect is tinged with fear - "what if I get less than an A in this class?" When they read the goals and essential learning outcomes of the First Year Seminar program that I teach/facilitate, they don't quite realize every assumption they have, every "fact" they have held dear for 18, 19, or 20 years, can and should be held under the microscope. It's uncomfortable for them.  Only by showing my discomfort that their teacher, a full five decades older than they are, struggled with these issues when I was their age, and continue to struggles with certain issues to this day, that they begin to understand what a class on Critical Thinking and Inquiry is truly concerned with.

My students may not be able to put into words that some of them are scared of the lack of compassion towards their fellow man that see on their electronic devices every day and, sadly, on campuses and in governmental capitals in this country and elsewhere.  They want success, happiness, a lifetime of good health, of sunny days and starry nights. They need to believe that there is someone who will clean up the air and the oceans, stop wars, cure diseases, and make the streets safe in every town and city.  I tell them those people already exist in this world and there are people in this very classroom who will join them. Because, if we are not here on Earth to make life better, then why are we here?  Yep, that old 60's radical-on-the-sidelines part of me slips right out.  While I do not admit to them who I voted for or my political affiliation, I do say that "we are in this together".  Easy to say but I mean it. One of the paths to a better world is to understand where we all came from and how we got here.  That's a life-long class in critical thinking and inquiry. To many of them, that class does not sound like fun and few believe me when I tell them it's part of what keeps me going when I could easily be swamped by "the news of the world." And I always say what my parents said to me - "You'll understand when you get older." Or maybe you won't.

To all of you in this imperfect yet often amazing world, enjoy the Holiday season! 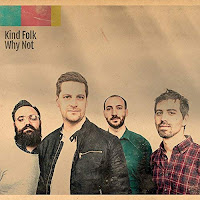 Kind Folk, a quartet that take its name from a song by Kenny Wheeler (1930-2014), came together the year that the great Canadian-born trumpeter and composer passed.  All four - trumpeter/flugelhornist John Raymond, alto saxophonist Alex LoRe, bassist Noam Wiesenberg, and drummer Colin Stranahan - are leaders of their own groups. Yet, Kind Folk does not feel neither like a side project or a Kenny Wheeler tribute band.  There are many reasons for that but one just might be that the freedom that the group hears in Wheeler's music spurs them find forward and helps them find their own voices in this aural landscape.


The group's debut album, "Why Not" (Fresh Sound New Talent), features only one tune from Wheeler but it's the one were they got their name.  The tune is led by Wiesenberg's thick bass lines and Stranahan's cymbal overtones before the trumpet and alto sax come in.  They play the lovely melody, mostly together, but there is a bit of call-and-response and harmony before Raymond takes the first solo. He produces such a clean trumpet sound, as much related to Clifford Brown as to Kenny Wheeler.  What's really fun is to listen how he is prodded forward by the drums who, at times,  converses with his lines. LoRe, who also possesses a cleaner tone, rises out of the rhythm section, his lines swooping and diving around the bass and drums.  The forward motion pulls the listener along willingly.

Besides the opening track and the album closer ("Silence", from the pen of Charlie Haden), the program includes songs by each musician including three short duos, one each for trumpet and drums, trumpet and alto sax, and alto sax and drums.  Those are each pleasing interludes but the meat of this group's music is the interactions that each songwriter hopes to create in the longer tunes.  Stranahan's "Motian Sickness" opens with drums but when the mournful melody comes in (first lines played by Raymond on flugelhorn and the second by LoRe), one has a better understanding of the title.  Raymond's "Landmarks" skitters in on the dancing brushes of Stranahan and, again, the front line shares the melody. This track has an Ornette Coleman feel, right down to the active bass work.  There's a hint of Steve Reich in the opening alto sax/trumpet  intro to LoRe's "#14" but that disappears as the bad leaps into the angular melody and stop-and-start rhythm.

"Silence" brings the album to a close, a soft coda with a powerful lullaby for a melody.  The quartet is, at the beginning, careful with the melody while Wiesenberg's majestic bass lines over Stranahan's soft brushes.  There's a hint of "freedom" in the trumpet-saxophone interaction but mostly they stick to the melody.  It's a tender finish to a powerful album.  "Why Not" stands out from 2018's bumper crop of new releases for the power of its message and its music.  Kind Folk does not tour much, especially since each musician is busy as a leader and/or sideman - Colin Stranahan plays in John Raymond's Real Feels while Noam Wiesenberg has toured this year with Chano Dominguez and guitarist Yotam Silberstein plus his own groups. Alex LoRe plays with lots of people in he New York City but mostly with his own quartet. Find this album, then hope the group tours nears you so that you feel this music in a live setting.

For more information, go to www.kindfolkband.com. 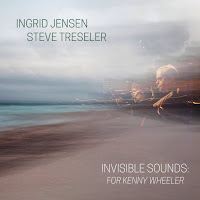 Tenor saxophonist and clarinetist Steve Treseler is a Seattle, WA-based musician who is slowly but surely building a career in both music and music education.  He first recorded with trumpeter Ingrid Jensen on his 2013 sophomore album "Center Song."  Upon the 2014 death of Kenny Wheeler, the saxophonist called Ms. Jensen, who was touring with her quartet of Martin Wind (bass), Jon Wikan (drums), and Geoffrey Keezer (piano), and suggested they make a tribute album.  They put the tracks down in March of 2015 plus played two shows in Seattle's The Royal Room.  Two tracks on the 10-song program come from that live show (more about those later).

Three and 1/2 years after the recording and live shows, Whirlwind Recordings has released those sessions under the title "Invisible Sounds: For Kenny Wheeler."  Treseler and Ms. Jensen created a list of thirty songs and lined them down to nine for this album. The album opens and closes with "Foxy Trot" (from Wheeler's 1984 ECM release "Double, Double You") - each version opens quietly busy soon the quintet hits the ground running. Keezer, Wikan, and Wind create a powerfully rhythmical storm for both soloists and neither one disappoints.  These musicians do not pay it safe as both versions thunder forward.  Ms. Jensen plays tribute to the late Wheeler by opening her solos on both track with a taste of the famous Wheeler fire before taking off on her own sonic adventures.  Her sister Christine, herself a leader of a delightful Canadian-based big band, play a fiery soprano sax solo on the studio version.

Besides two short tracks, the 75-second "Duet" (for trumpet and tenor sax) and the 1:56 "Ingalude"), the songs stretch over seven minutes. The one exception to that statement is "546" which, at 3:51, starts as a quiet ballad that resembles John Coltrane's "Central Park West" and substitutes the sweet soprano voice of Katie Jacobson for Wikan's drums. Halfway through, Keezer's piano powers the song forward while the drummer returns to drive the band.

The other tune from the live session is a rollicking New Orleans-flavored "Old Times".  Not just rollicking but also roaring with the pounding piano fueling Ms.Jensen's hard-edged solo while Wikan dances on below.The intensity level drops a notch or two when Treseler's tenor sax enters but the power slowly, steadily, builds back up.  Back in the studio, Keezer channels McCoy Tyner for the powerful chords and rippling piano flourishes that color "Everyone's Song But My Own" (from Wheeler's 1987 Soul Note album "Flutter By, Butterfly") - after the stunning opening, the piece drops into a medium-tempo and the quintet moves forward.

There's not a dull track on the album, so let me just say that "Invisible Sounds: For Kenny Wheeler" is a delight from start to finish. Ingrid Jensen and Steve Treseler shine throughout as do Jon Wikan, Martin Wind (the foundation glue of the music), and Geoffrey Keezer (who is downright brilliant).  No pale imitation here, this is real music!


Now about that live show in The Royal Room.  NPR recorded for its "Jazz Night in America" series and you can watch it in its entirety below.  Goes well with fresh Holiday food or the ubiquitous  leftovers paired with a glass of good wine and/or craft beer!