If you listen to music from other countries and other hemispheres, one thing you may notice is how the populations in warmer climes (Central and South America, Africa, The Middle East, the Pacific Islands, to name a bunch) create music that blends percussion with melody, often with delightful results.  If one only listened to the ECM Records albums by Egberto Gismonti (pictured left), you might think he was an acoustic musician/composer with a great understanding in his country's indigenous music as well as European classical music. He is that and much more. Try and find Mr. Gismonti's Brazilian recordings from the 1970s and 80s. There, you hear music that combines even more influences, including the "Tropicália" movement of the late 1960s that produced such amazing artists such as Caetano Veloso, Gilberto, and Tom Zé. 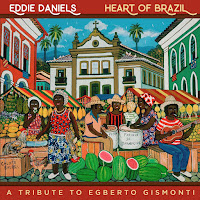 Resonance Records owner George Klabin has been a huge fan of the Brazilian's music since he first heard his musician in the 1970s.  In 2016, he introduced clarinetist/saxophonist Eddie Daniels to Gismonti's music and the seeds for "Heart of Brazil" were planted. Daniels made several suggestions, including hiring Ted Nash to write arrangements as well as the idea of pairing a string quartet with a "jazz" quartet.  The producer picked the material, all but one piece ("Tango Nova", composed by Daniels) from Gismonti's Brazilian albums and employed the Harlem Quartet - violinists Ilmar Gavilán and Melissa White, violist Jamey Amador, and cellist Felix Umansky - putting them in the studio with Daniels, pianist Josh Nelson, bassist Kevin Axt, and drummer Marco Zottarelli.  Besides Nash's five arrangements), long-time Resonance Records arranger Kuno Schmid arranged five pieces while pianist Nelson added two and Mike Patterson (who had arranged pieces on Daniels's duet albums with pianist Roger Kellaway).

The results are, in a word, magnificent.  Bask in the delightful melodies of the faster pieces such as the two that open the album, "Loro" and "Baiâo Malandro". The former has been covered numerous times by artists such as Esperanza Spalding, guitarist Paolo Martell, and, most recently, by Anat Cohen on her Tentet recording "Happy Songs." That's understandable, with its joyous "Flight of the Bumblebee"-like melody line.  Note here how strings flow around the melody but also how Daniels' solo is echoed by the rousing drum work of Zottarelli.  The string quartet introduces the latter tune hinting at the funky, fast-paced tune to follow. If anything, the melody line is even faster than its predecessor. Played here by Daniels and Nelson, it's absolutely breathtaking! (Check out the original version here). The drummer is quite the spark plug here as well.

The ballads chosen for the album each have their charms and surprises.  "Trem Noturno" ("Night Train") opens as slow moody melody for tenor sax and piano before bursting into a fiery mid-section (including a splendid piano intro and give-and-take between strings and tenor), and then into a slower clarinet solo and the rapid-fire close.  "Auto-Retrato" ("Self-Portrait") includes a lovely string quartet intro before Daniels (clarinet) and Nelson play the melody. The entire ensemble then enters and the piece moves forward gently.  More of a classical feel is heard on "Adagio", the strings bathing the clarinet in showers of sweet counterpoint - take note of bassist Axt's fine accompaniment and Zottareilli's lovely brush work.

"Heart of Brazil" is a oft-times dazzling tribute to the music of Egberto Gismonti played with heart, soul, and wit by Eddie Daniels and company. It's a lot of music for one CD (nearly 78 minutes) yet I have no idea what the producer could have edited.  Take your time and deep breath, dive in and no matter where you emerge, the guarantee is that you'll be bot entertained and refreshed!

For more information, go to eddiedanielsclarinet.net. 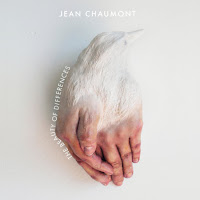 Guitarist and composer Jean Chaumont, born in France, moved to Princeton, New Jersey, in 2014 and slowly, steadily, began playing his own music in the United States. Back home, he had composed music for advertisements, short films, and documentaries plus arranged pieces for several different artists.  For his debut album "The Beauty of Differences" (Misfitme Music), he gathers an excellent group of musicians - saxophonist Sam Sadigursky, pianist and Rhodes player Michael Bond, bassist Ike Sturm, and drummer Rudy Royston - to play nine original works.  Chaumont plays an electric acoustic guitar (with effects) plus steel string and nylon string guitars. While he is intimately involved in all phases of this music, he does not hog the spotlight giving plenty of room for others to solo.  Sadigursky plays both tenor and soprano saxes throughout (but no clarinet) with the tenor adding weight to the music.  Bond, who has worked with the Captain Black Big Band and saxophonist Tim Warfield among others, often matches the guitarist's impressionistic work - even his Rhodes work has a lighter quality.  Royston, who can light a fire under any ensemble, does not only play with his usual gusto but also displays his sensitive brush work and ultra-musical use of cymbals.

The title tune adds the vocals of Vinod Gnanaraj, sung in his native Tamil language, and the splendid percussion of John Hadfield.  With the quintet swirling around them, the music goes in various directions at different tempi.  Tierney Sutton adds her lovely voice to "Prayer For Creation" which celebrates the Creator in word and song (lyrics by Cathy Yost).  The blend of acoustic guitar, soprano saxophone, and voice is quite pretty. Notice how the rhythm section moves the piece forward without force.

One can hear the influences of Chick Corea and progressive rock on pieces such as "PPCB" with its rapid-fire opening an d chordal progressions.  Royston kicks hard during the solo section, pushing Bond and Sadigursky to really dig in.  The album opener "Renewed Perspective" starts quietly but builds in intensity as Chaumont's long solo unwinds. The ballads engage the listener with fine melody lines ands intelligent solos. The rich tenor tones of Sadigursky dominate the first 2/3rds of "This One is For You", moving his way through the melody with emotion and grace.  The leader takes a short but sweet solo over the shimmering cymbals.  "For Each One of Them" starts ever-so-slowly with guitar, bass, and drums moving gracefully through the melody (note the excellent bass work).  Then the tenor enters leading the piece forward until the guitarist changes the direction with his rhythmical chord strumming. Bond, Chaumont, and Sadigursky exchange short solo lines as Royston creates a storm below.  The drummer gets his own spotlight, heating up the proceedings as he is wont to do.

"The Beauty of Differences" is a response to the New World that Jean Chaumont has moved to. Instead of being repelled by the craziness, he searches for beauty, for communication, for interaction, and for hope.  The quintet is in sync throughout, not just respecting the composer's intent but building upon it, making his ideas sing.  If you give this music more than a cursory listening, you'll be impressed by the depth and emotion of the performances.

To find out more, go to www.jeanchaumont.com.

The vast majority of the proceeds from the sale of the album go to finance the excavation of wells in Sakata region of Malawi, a landlocked republic in Southeast Africa.  Particularly hard-struck by drought and the AIDS virus, the country is aided by the NGO, Villages in Partnership - to find out more, go to villagesinpartnership.org.