What a Weekend for Creative Music in CT

What to do, where to go, so much good music all around me - deep breath  Okay, Autumn officially starts this week and the concert venues around the state are already cranking up.  I is actually was a fairly busy Summer but now the choices are even more numerous.  After a number of great concerts in July and August, I'm itching to get out and hear some live music.

Let's start on Friday in Old Lyme.  The Side Door Jazz Club welcomes Matt Wilson's Honey & Salt for an 8:30 p.m. performance (actually, there are two sets).  The Quintet - composer and drummer Wilson, Dawn Thomson (guitar, vocals), Jeff Lederer (all sorts of reeds), Ron Miles (cornet), and Martin Wind (acoustic bass guitar) - gets its name from its new album, a recording that celebrates American poet Carl Sandburg (1868-1967). The recording is a delightful pastiche of styles, from raucous jazz to country 'n' western to blues to rock and so on.  The ensemble has been touring for the past month or so and been getting great receptions wherever they perform.

To reserve and/or buy tickets, go to thesidedoorjazz.com or call 860-434-2600.  To learn more about the Sandburg project, go to www.mattwilsonjazz.com.

Here's the drummer and poet in duet:

Also on Friday, the Firehouse 12 Fall 2017 Concert Series continues with the Frode Gjerstad Trio with special guest Steve Swell.  Alto saxophonist Gjerstad (he also plays clarinet) has been on the European Free Jazz scene since the late 1970s and is one of the more fiery players around.  The rhythm section, drummer Paal Nilssen-Love and bassist Jon Rune Strøm, match the leader's intensity and often help to keep the fires stoked.  Trombonist Steve Swell joins the Trio on occasion for tours and recordings, bringing his unique approach to the instrument and music, one that he has developed from his associations with Bill Dixon, Anthony Braxton, and William Parker. 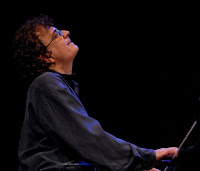 Pianist and composer Laszlo Gardony returns to The Buttonwood Tree, 605 Main Street in Middletown, on Saturday (9/23) at 8 p.m. for a concert of solo piano music.  Professor Gardony, who is on the faculty of the Berklee College of Music in Boston, is a frequent visitor to The Buttonwood.  He's back this time to celebrate the release of his latest Sunnyside Records album, "Serious Play", a delightful collection of works including a number of originals and standards such as "Georgia on My Mind" and John Coltrane's "Naima."  The pianist pays with great fire, great emotion and a love for melody.

For ticket information, go to buttonwood.org/event/lazlo-gardony-cd-release-concert/ or call 860-347-4957. To find out more about the pianist, go to www.lgjazz.com.

Here's the delightful and forceful "Truth to Power": 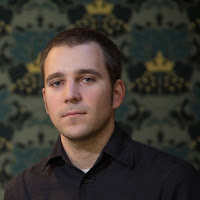 Bassist, composer, and curator Carl Testa is bringing the Uncertainty Music Series to a close this weekend with a Farewell Festival.  And it take place in the delightful sound space of Firehouse 12.  On Saturday at 8:30 p.m., the Series presents Jeremiah Cymerman's SYSTEMA MUNDITOTIUS with Matt Bauder, Patrik Holmes, and Aaron Novik plus a set by a collaborative ensemble featuring Anne Rhodes, Chris Cretella, Forbes Graham, James Ilgenfritz, and Adam Matlock. Sunday, the show starts a 7:30 p.m. with Electronic Music by Val Inc. plus a set by a collaborative ensemble featuring Erica Dicker, Louis Guarino Jr., Junko Fujiwara, Andria Nicodemou, and Carl Testa. For ticket information, go to uncertaintymusic.com or firehouse12.com.

Carl Testa ran the Uncertainty Music series for 10 years, bringing musicians from all over the world to play music that challenged our stereotypes and made us listen with new ears.  The series will be sorely missed!

Finally, on Saturday night, The Side Door Jazz Club welcomes guitarist and composer Dave Stryker and his Quartet.  Stryker's new album, "Strykin' Ahead", (issued on the guitarist's own Strikezone Records) is a delightful mix of blues, swing, and bebop: he's bringing two of the musicians, organist Jared Gold and the delightful drummer McClenty Hunter to the Old Lyme venue. Sitting in on vibraphone will be Monte Gold who's taking the place of Steve Nelson.

The band hits the stage at 8:30 for the first of two sets. Go to thesidedoorjazz.com for more information.
Posted by Richard B. Kamins at 9:27 PM