The Uncertainty Music Series moves to a new venue this Wednesday (7/22), the Ball & Socket Arts Garage, 530 West Main Street in Cheshire.  Scheduled to perform is the trio known as Broadcloth (pictured left) composed of Anne Rhodes (voice), Adam Matlock (accordion, recorders) and Nathan Bontrager (cello). The trio plays "avant-garde chamber improvisational music" and does so with a great sense of adventure and drama.  Scheduled to open the show at 7 p.m. is the trio of Bontrager, Loren Ludwig (analog synth, viola da gamba), and Spiff Wiegand (guitar).

This weekend, The Side Door Jazz Club presents 2 artists with a strong connection to the late saxophonist and educator Jackie McLean (1931-2006).  On Friday (July 24), the Club presents pianist and composer Alan Jay Palmer brings his Nu Soil Ship to the Shoreline venue. Palmer, a native of Washington D.C., first encountered Mr. McLean when the young man came to Hartford to study at the Hartt School of Music. There, he studied with pianists Jaki Byard and Hotep Galatea. In Palmer's senior year, he toured Europe and Japan with the McLean Quintet and eventually made his recording debut on the alto saxophonist's 1992 recording "Rhythm of the Earth".  Palmer continued to tour with McLean until a few years before the saxophonist passed.  The pianist has gone on to work with trumpeter Roy Hargrove, rappers Mos Def and Common as well as saxophonist Kenny Garrett and many others.

Nu Soil Ship is the name of Palmer's large ensemble but there is no information about the group he's bringing to Old Lyme save the names of saxophonists Bruce Williams and Ronald Sutton, Jr.  No matter who's in the band, the music should be energizing and challenging.  Palmer and Nu Soil Ship hit the stage at 8:30 p.m.

On Saturday 7/25, saxophonist and educator Jimmy Greene returns to The Side Door Jazz Club. The Hartford-native plays a hearty tenor saxophone and has become quite proficient on the soprano. He attended Jackie McLean's Artists Collective and earned his undergraduate degree at the Hartt School of Music/University of Hartford and his Master's from Boston University.  Now on the faculty of Western Connecticut State University, Greene has worked with the late Horace Silver, Kenny Barron, Harry Connick Jr., Mario Pavone and so many others.  He's bringing his Quartet but, as of this writing, I'm not sure who's in the band but you know that it will be a top-notch group as much of Greene's music is not for the faint of heart.

The door opens at 7:30 p.m. and the Jimmy Greene Quartet hits the stage at 8:30.  For reservations and more, call 860-434-0886 or go to thesidedoorjazz.com. To learn more about the saxophonist, go to www.jimmygreene.com. 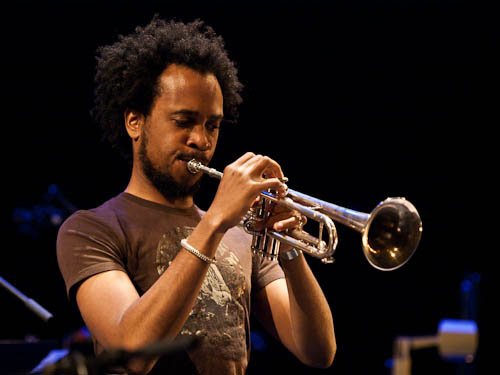 The Bushnell Park Monday Night Jazz series is in full swing and next week's show should be quite a good one.  Trumpeter Jonathan Finlayson & Sicilian Defense come to Hartford to perform original music that builds on modern beats and classic African American music from the likes of Ornette Coleman, Woody Shaw, and especially Steve Coleman. The trumpeter has been a member of Coleman's Five Elements since 2000, recording a number of impressive CDs and touring throughout the world.   Finlayson's 2013 debut album "Moment and the Message" (issued on Pi Recordings), covered a wide swath of musical territory, filled with exciting playing and striking improvisations.

For the Hartford date, which begins at 6 p.m. with trumpeter Ricky Alfonso's group, Finlayson's quintet includes Miles Okazaki (guitar), Matt Mitchell (piano), John Hébert (bass), and Craig Weinrib (drums).   It's quite a band and they should be firing on all cylinders. 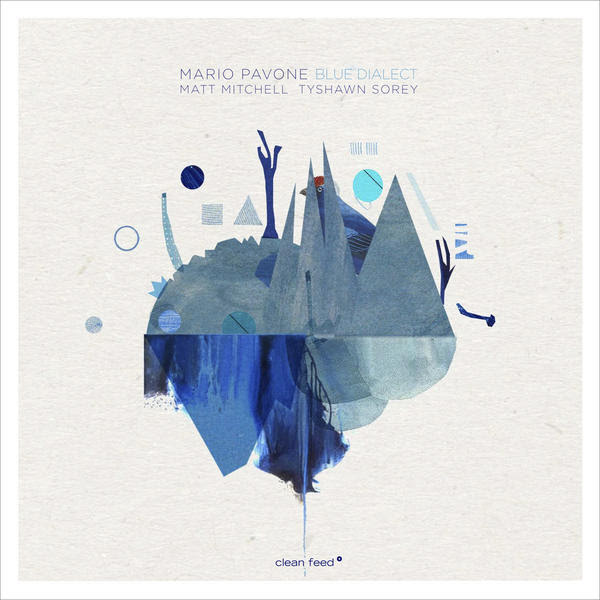 I have had the joy of hearing bassist and composer Mario Pavone many times over the past 4+ decades.  I have seen him anchor and power groups led by the late Thomas Chapin and guitarist Michael Musillami plus play the fascinating music of reed master Anthony Braxton. He has recorded 17 albums as a leader, including 9 for Musillami's Playscape label, with groups of differing sizes composed of impressive musicians, composing music that pushes the boundaries and decidedly ignores genres.

Recording # 18 is here and it's his first on a European label.  "Blue Dialect" arrives on Clean Feed based in Lisbon, Portugal.  Pavone, who turns 75 in November of this year, wrote all of the pieces save for one group improvisation and is in the impressive company of pianist Matt Mitchell (Tim Berne's Snakeoil) and drummer Tyshawn Sorey (Paradoxical Frog, Steve Lehman).  As to be expected from a Pavone program, the pieces are composed to features the interactions of the trio and build upon the impressive melodies.  There's a mighty undertow of "swing" on "Two One" (listen to how Sorey converses with his cohorts from the drum chair) while "Xapo" has an intensity fired again by the propulsive drumming and the powerful countermelodies from the bass.  "Silver Print" may remind some of the Duke Ellington/Max Roach/ Charles Mingus 1962 "Money Jungle" especially in how the rhythm section creates the tension that is released when the pianist moves into a higher gear.

Several pieces display an Andrew Hill influence in the melody lines and approach to the performance.  "Reflections" has a quirky beat but a straight-forward melody that Mitchell splays over the rhythm. The unrelenting forward motion of "Suitcase in Savannah" pulls the listener in and makes one pay attention to the strong piano solo and the leader's active bass lines.  There's a blues tinge to "Zines" as well as an Ornette Coleman feel in the hesitant piano lines. The group improvisation, "Trio Dialect", concerns itself with how these 3 musicians share a common language yet maintain their individuality.

I do love the energy of these performances, the tension and release, the leaps of faith each musician takes because of their relationship to each other and the music.  "Blue Dialect" doesn't reinvent the piano trio as much as the 3 musicians shun the conventional approaches, eschew cliches, and has a relentless forward motion. Kudos to leader Mario Pavone, Matt Mitchell and Tyshawn Sorey for this splendid music.

For more information, go to www.mariopavone.com (although it needs a bit of an update).
Here's the group in action courtesy of Scott Friedlander: 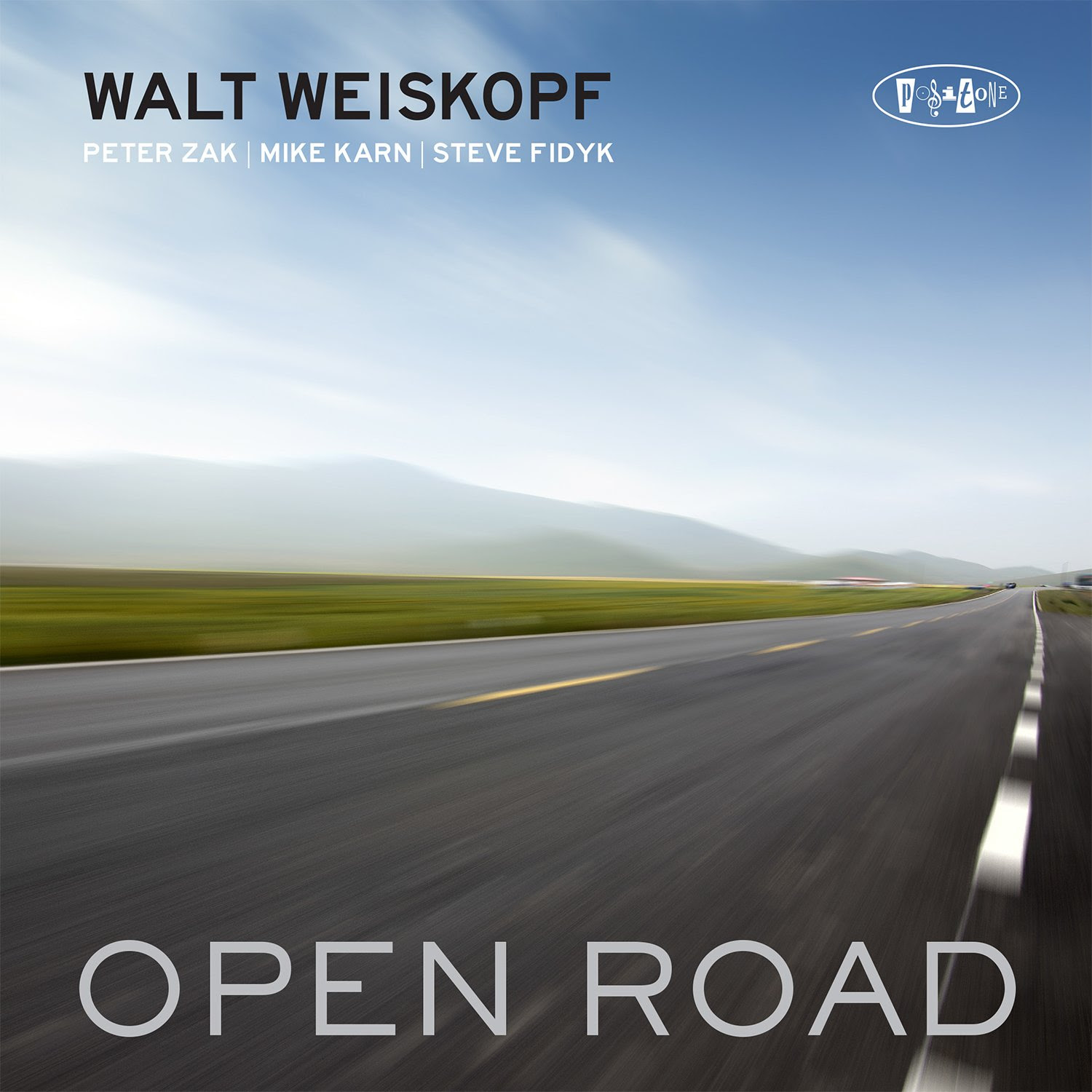 For his second PosiTone release, tenor saxophonist and composer Walt Weiskopf takes to the "Open Road" with a quartet that features pianist Peter Zak, bassist Mike Karn and the dynamic drummer Steve Fidyk. The urgency in the saxophonist's attack is on display throughout, flying right out of the gate with the first 3 tracks, all originals (10 of the 12 cuts come from the pen of the leader.) The opener, "Premonition", leaps atop the fiery Fidyk, pushed forward by the 2-handed attack of the pianist and active "walking" bass lines.  In the middle of the piece, Weiskopf and the drummer have a short but very high-energy exchange similar to ones that John Coltrane had with Elvin Jones on the early-to-mid 1960s.

Playing hard and forceful soloing is the modus operandi for the majority of the program. Weiskopf, who also tours the world with Steely Dan, drives the band with solo after solo that explode from the speakers. Whether it's the joyful fury of "Electroshock" or the clarion call of "Invitation to the Dance", the leader's energy never flags. The quartet does take its time on ballads such as "Stage Whisper" and the Matt Dennis-penned standard "Angel Eyes"; still, the tenor solos have an unmistakeable passionate edge. On "Nancy With the Laughing Face", the bass and saxophone lead the song in with a gentle reading of the theme before Zak's bluesy solo.   When Weiskopf re-enters, his lines crackle with excitement.

The music and performances on "Open Road" refers back to the Prestige, Blue Note and Impulse sessions of the late 1950s through the mid-1960s.  And the musicians do so without sounding deferential or imitative.  For his 15th date as a leader, Walt Weiskopf gives listeners a welcome rush of fresh musical air to breathe deeply and savor.

To find out more about the saxophonist, go to www.waltweiskopf.com. For more information and a slew of sound clips, go to www.posi-tone.com/openroad/openroad.html.