Pianist/composer Carolina Calvache is a native of Cali, Colombia, who came to the United States to study in the prestigious music program at the University of North Texas and now lives in New York City.  She has been mentored by the great Venezuelan pianist Luis Perdomo and has worked with saxophonist John Ellis, bassist Linda Oh and percussionist Samuel Torres. Her self-produced debut Cd, "Sotareno" (Sunnyside) is an often stunning display of melody and musicianship as well as a reminder of how jazz is a world music.

The opening cut, "El Sotareno", is based on a traditional hymn from the region of Colombia where her father's family lived. In the able hands of drummer Antonio Sanchez (the sole track on which he appears, bassist Hans Glawischnig and alto saxophonist Jaleel Shaw, the piece explodes out of the gate with an intensity that never flags.  Ms. Calvache's solo soars over the active rhythm section as if sparked by McCoy Tyner. (A short solo piano reprise at the end of the CD gives the listener an idea of the original melody.)   Cuban-born drummer Ludwig Afonso is featured on 7 of the tracks, powering the band on "Lluvia" which features the clear tones of trumpeter Michael Rodriguez.  The trumpeter also appears on the lovely ballad "Too Soon", where his "singing" tones blend well with the rich piano chords.  Shaw's soprano sax is the focal point of  the lovely ballad "Melancholia", caressed by the full piano chords and buoyed by the excellent interactions of the bassist and drummer.  Ms. Calvache's piano spotlight is filled with expressive single-note runs punctuated by chords that ring out. "Stella", the pianist's birthday song for her mother, has the feel of a Brazilian melody, one that has a long, flowing, line echoed in the fine bass solo that precedes Ms. Calvache's sweet solo.  "Dream Maker" has an irresistible rhythmic feel in its melody line, in the forceful left hand of the pianist and in Afonso's first-rate work.  Glawischnig insinuates his  playing around the pianist; their interaction throughout the recording is delightful.  The playful "Monday", inspired by a Perdomo concert Ms. Calvache attended has a quirky left hand rhythm, intense drumming, and a slippery alto saxophone melody for Shaw.  The pianist's solo "swings", building in intensity over the exuberant rhythm section.

"El Sotareno" does not sound like a first album.  Carolina Calvache seems neither tentative nor nervous; instead she's quite self-assured as a composer, arranger, producer and soloist.  As debut recordings go, this is an impressive start to what one hopes is a long productive career.  For more information, go to www.carolinacalvache.com.

You can listen to the CD here, courtesy of Sunnyside and Bandcamp: 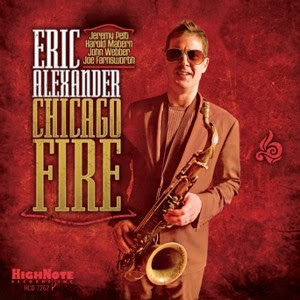 "Chicago Fire" (HighNote) is the 35th release by tenor saxophonist Eric Alexander under his own name (that includes 2 sessions co-led with Vincent Herring and 1 with Lin Halliday), not counting his work with One For All.  It's been 23 years since he took part in the Thelonious Monk Saxophone Competition and went to record his debut with Delmark Records.  While his sound has deepened and his blues "chops" strengthened, he still possess a great tone and great respect for his predecessors, players such as Don Byas, Johnny Griffin, Eddie Harris, Von Freeman and Sonny Stitt (the final 3 musicians are honored by original compositions on the CD.) Alexander records with his favorite rhythm section of bassist John Webber, drummer Joe Farnsworth and the irascible pianist Harold Mabern.  Having seen and heard the great Memphis, Tennessee-native Mabern play live with Alexander, I know how hard the tenor saxophonist works to keep with the pianist (who can and does play everything).  Trumpeter Jeremy Pelt, who has played on numerous occasions over the past 15+ years with Alexander, joins the band on 3 pieces including the fast-paced Mabern original "Bee Hive" that may remind some of the Clifford Brown-Max Roach Quintet of the mid-1950s. Pelt also digs into a fine solo on Buddy Johnson's "Save Your Love For Me" and gets "down and dirty" for "You Talk That Talk."  Mabern and Alexander reminisce about the late tenor payer Freeman on "Blues for Vonski", a bluesy ditty that moves slowly and features a sultry saxophone solo  and a rollicking piano spot.  The group pays tribute to Johnny Griffin with an explosive reading of "Just One Of Those Things", Alexander flying over the rhythm section.  The program closes with "Don't Take Your Love For Me", a Henry Nemo tune introduced by Mildred Bailey and recorded by Artie Shaw and Lena Horne (among others).  Farnsworth gives the tune a bossa-nova rhythm, amplified by Mabern's bouncy chordal work, while Alexander plays a sweet and very melodic solo.

"Chicago Fire" is a first-rate tribute to saxophonists associated with the Second City as well as another highly enjoyable album from Eric Alexander. If you are a long-time fan, you will be pleased - if you're new to Alexander's music, this is a good place to begin exploring his fine work.  For more information, go to www.ericalexanderjazz.com.

One of the myriad joys listening to the music of guitarist Nels Cline is that you now his music will run the gamut from lullaby-like melodies to moments of unfettered shredding.  Besides touring and recording with Wilco, appearing on numerous side-projects, his main vehicle is the Nels Cline Singers.  The Trio - Cline (guitars, etc), Scott Amendola (drums, percussion, electronics) and new member Trevor Dunn (bass, effects) who replaces Devon Hoff - has a new CD.  "Macroscope" (Mack Avenue/Cyrptogramophone) features a number of guest contributors including Yuka Honda (electric piano), Cyro Baptista (percussion universe), Josh Jones (congas, other percussion) and Zeena Parkins (electric harp). Over the course of an hour, the music rocks, roars and roils, shimmers, sputters, clangs, burbles, charms, disarms and goes in many directions.  Take a piece like the trance-like "Seven Zed Heaven"; the music starts as a high-energy, fast-paced jam to a long section that continues to builds in intensity until it explodes into shards of percussion.  "Canales' Cabeza" is another burner with the guitarist letting loose over the rolling bass lines and furious drum work.  Latin percussion blends with electronic effects at the onset of "The Wedding Band", a mix that feels like 1970s Santana before the lap steel and 12-string guitar provides a handsome melody.  The solid throb from the electric bass and drums give Cline and Ms. Parkins a rocking rhythm to mess around on "Climb Over."

"Macroscope" is a very playful album and one was be willing to play along.  The music can be quite noisy but almost always keeps a humorous edge.  One imagine that the volume level in concert halls and other venues can be over-whelming ("Hairy Mother" just about melted my speakers in the house and the car.)  That said, the Nels Cline Singers give listeners a mighty dose of serious fun.  For more information, go to nelscline.com.