2012 has been a stellar year in the life and career of composer/educator/trumpeter Wadada Leo Smith.  Actually, the last decade had been mighty impressive, what with commissions, awards and numerous impressive recordings with various ensembles.


Here's the latest, an announcement that "The Fromm Music Foundation at Harvard University has selected trumpeter/composer/musical innovator Wadada Leo Smith as one of fourteen composers to receive a 2012 Fromm commission."
"With the commission, Smith will write a new work to commemorate the 50th anniversary of the March on Washington and Dr. Martin Luther King, Jr.'s "I Have a Dream" speech. Tentatively titled "The March on Washington D.C. - August 28, 1963," this will be the 22nd composition in Smith's highly acclaimed civil rights opus Ten Freedom Summers, which the trumpeter has written over the past 34 years and calls "one of my life's defining works."

The new work - composed for Smith's Golden Quartet, along with string quartet and harp - will premiere on the final evening of a three-night performance of the complete "Ten Freedom Summers" collection at Roulette in Brooklyn, New York on May 1 - 3, 2013." 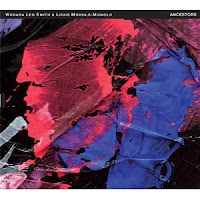 Another factor in this stellar 2012 is the release of "Ancestors", a duo recording with drum master Louis Moholo-Moholo released on the Finnish TUM Records label.  One might expect that Messrs. Smith and Moholo-Moholo would create an Africa-centric performance, filled with rhythmic excitement, not unlike the classic "Mu" recordings of Don Cherry and Ed Blackwell. Yes, that music is honored here but this wide-ranging dialogue covers a wide swath of territory.  And, one can hear Moholo-Moholo is a drummer in the Blackwell style, a musician who "conversed" with his bandmates on record and on the bandstand.  He does not pound away nor attempt to drown out the trumpet - instead, the 9 tracks display how 2 individual voices work together to create a coherent statement. The opening 4 tracks are dedications to the drummer and James Baldwin  (composed by Smith), a duo composition honoring artist Jackson Pollock and the drummer's piece for his father Siholaro Moholo.

The remainder of the CD contains the 5-part "Ancestors" that is a musical journey into creativity, spirit, interaction and joy.  This is music not anchored in a particular time period, as much contemporary as it is contemplative of the musicians' separate influences.  Whether it's the shimmering, clanging, bells and shakers shower that opens "Part 1"leading to a long yet vibrant drum solo or the muted trumpet atop active drums that make up "Part 3" or the dancing rhythms that introduce "Part 4", the music draws one in and closer.  The percussion shower returns for "Part 5", a piece during which the musicians shout out "We Love You" to fellow travelers
such as Chris McGregor, Jack DeJohnette, Art Blakey, Max Roach, Miriam Makeba and others.

"Ancestors" shines brightly, a sensuous, thrilling and emotional musical adventure that warms the heart while it stimulates the mind.  Thanks go to both musicians and the fine people at TUM Records who brought this project to life.  For more information, go to tumrecords.com.
Posted by Richard B. Kamins at 5:26 PM