Noah B Solo at The Library + CD Pick (Looking at Toots T.) 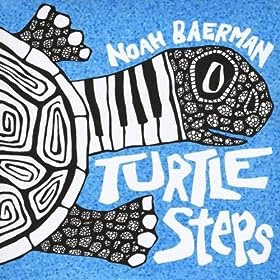 Sunday is a busy day in Hartford for jazz fans (actually, it's a pretty busy weekend.)  From 12noon - 4 p.m., trombonist Delfeayo Marsalis brings his Quintet (including Hartford native Dezron Douglas on bass) to town for the "Jazz Brunch at the Hartford Club", an event whose profits support the Gifts of Music program and other local charities. For ticket information, call Hap Leabman at 860-409-6883.

Sunday afternoon, pianist Noah Baerman (a Middletown resident) performs a "Solo Concert" at 3 p.m. as part of the Hartford Public Library's very successful "Baby Grand" series.  The Library, located at 500 Main Street in the Capitol City, presents these weekly concerts in the winter and spring in its lovely atrium;  the concerts are free and open to the public.

As for Mr. B, the concert can be viewed as a "CD Release" event for his latest recording, "Turtle Steps" (Lemel Productions).  It's a fine and varied program of solo works, ranging from originals to gospel pieces to standards to an elongated version of Chopin's "Minute Waltz."  Recorded in the studios of the Hartt School of Music in June of 2011, the music is joyous, playful, inventive and...well, jazzy.  Baerman, as a student at Rutger's University, studied with pianists Kenny Barron and JoAnne Brackeen (both of whom have tunes on the CD dedicated to them) and one can hear their influence in his writing and the manner in which he solos.  Yet, Baerman is much more his own person than a parrot of his mentors.  To find out more about Noah, go to www.noahjazz.com - to get directions to the Hartford Public Library, call 860-695-6293.

Chances are good, if you are under 50 and a music fan, you've been touched by the music of Jean-Baptiste "Toots" Thielemans at some time in your listening life.  That's him at the beginning of "Sesame Street", playing solos on Lps by Billy Joel and Paul Simon, and jazz with Quincy Jones and Jaco Pastorious.  Nowadays, he confines his playing to the chromatic harmonica but, in his prime, his guitar playing and whistling was pretty impressive.


"Yesterday & Today" (T2 - Out of the Blue) is a fascinating 2-CD compilation of tracks ranging from 1946 - 2001.  Thielemans, who turns 90 (!) on April 29 of this year, shows his versatility on a amazing range of styles.  The early tracks (on guitar) illustrate a player who's absorbed the playing of both Django Reinhardt and Charlie Christian and you can hear the inimitable harmonica sound as far back as 1950's "Nalen Boogie", recorded in Stockholm, Sweden. On one of his first trips to the US (1952), he recorded with organist Dick Hyman and banjo player Harry Reser on an original track called "Dynamite." There are pair of tracks from his collaboration with the George Shearing Quintet, including a sultry "Caravan" featuring Toots on harmonica and Candido on bongos.  12 years later (1965), he showed more Latin chops on "Soul Bird (Tin Tin Deo)", arranged by Gary McFarland and featuring the likes of Clark Terry, Bob Brookmeyer, Grady Tate and Mel Lewis (on percussion).  The previous year, Thielemans recorded "Lullaby of Jazzland" with a group that featured J.J. Johnson (trombone) and the rhythm section of McCoy Tyner (piano), Richard Davis (bass) and Elvin Jones (drums).  2 tracks from 1968, "O Susannah" and "Please Send Me Someone to Love", feature guitarist Bucky Pizzarelli, bassist Ron Carter and pianist Herbie Hancock with Toots on guitar.


CD 2 opens with 2 tracks from a 1973 Quincy Jones production including the ultra-funky "Chump Change", composed by Jones and Bill Cosby, with Toots whistling the theme and improvisation as well as some "moaning" harmonica. There are a pair of fine solo tracks, Ellington's "Black Beauty" and an original "The Slickest Man In Town" (a touch of Robert Johnson can be heard in both the vocal and guitar work on the latter.) There are 3 duo tracks, a bluesy "Bye Bye Blackbird" (with pianist Louis van Dijk), the ruminative "Spartacus - Love Theme" (with bassist Marc Johnson) and the lovely "What a Wonderful World" (with Kenny Werner on piano and synthesizer).  The most beguiling track is his collaboration with the Shirley Horn Trio on "Someone to Watch Over Me."  The way he intertwines his chromatic harmonica with Ms. Horn's breathy vocal is magical.


There's many more highlights on this program, compiled by friend and producer Cees Schrama. His wonderful harmonica work, sprightly guitar, fancy whistling, and intuitive work as both soloist and accompanist make this a fine overview of a musician who continues to please audiences around the world - he's celebrating his 90th birthday with a 8-city concert tour of Belgium in late April and early May.  For more information about the CD, go to www.t2entertainment.nl - to learn more about this fine person, go to www.tootsthielemans.com.
Posted by Richard B. Kamins at 6:10 PM