Flute (and more) for Thought 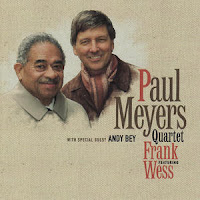 Paul Meyers Quartet featuring Frank Wess (Miles High Records) - Guitarist Meyers is a creative sort, playing a program of (mostly) standards on acoustic nylon string guitar in a quartet session with saxophonist and flautist Frank Wess.  Bassist Martin Wind (always melodic and supportive) and drummer Tony Jefferson (a light touch as befits the sonorities of the group) round out the ensemble save for one track with vocalist Andy Bey.
The group had never worked together as a unit before entering the studio yet the music neither sounds forced nor the camaraderie phony.   Wess's playing may be a bit more economical than it was 25 years ago, but his light tenor sax and colorful flute work shows no weaknesses. Paired with with Meyers' rippling guitar lines on the guitarist's original boppish blues "Blue Lantern", the flute sounds joyful.  There's a touch of Coleman Hawkins and Ben Webster in Wess's tenor as he gambols through "I Cover the Waterfront" while offering up bluesy smears and blowsy bravado on the original "Menage a Bleu" (a blues waltz contributed by Wess.) Meyers transforms "In the Wee Small Hours of the Morning" into a lovely bossa nova, a tune that rise and falls softly over the fine rhythm section and has the prettiest flute solo on the disk.  Meyers is a facile guitarist, with crisply articulated lines. And he can swing like mad, as he illustrates on the romping version of "Just One of Those Things."  Bey's contribution on "Lazy Afternoon" is quite pleasing, his scatting a strong counterpoint to the guitar (Wess sits out this track.)
Messrs. Meyers, Wess, Wind and Jefferson have created a sweet concoction that goes down like a glass of fine port.  Mature, aged to perfection but sassy enough to make one want more.  For more information, go to www.paulmeyers.info.
Here's "Just One of Those Things" (courtesy of IODA Promonet.)
Just One of Those Things (mp3)

Three's Company - Bill Cunliffe & Holly Hofmann (Capri Records) - Beauty should not be overlooked as a reason to enjoy music.  For some, a roaring tenor sax or buzzsaw guitar can be aurally orgasmic but, for this reviewer, a pianist who understands that blues can be joyous is quite enjoyable.  The opening track on this disc, "Too Late Now", is a track to behold.  Cunliffe's glorious left hand and active right hand, mixed with Hofmann's sweet and lowdown flute is worth repeated listens.  The other duo tracks are Faure's "Pavane" and Cunliffe's "Dalto" and "Farewell." The sweet Latin feel of "Dalto" leads one to believe that Cunliffe wrote this in tribute to the Argentinean pianist whose tragic passing at the age of 39 (in 1987) robbed the music world of a great player and fine composer. Cunliffe's highly rhythmical yet richly melodic lines really capture the spirit of the person to whom the piece is dedicated.
Guest artists include violinist Regina Carter, clarinetist Ken Peplowski, trumpeter Terell Stafford and drummer Alvester Garnett. Carter and Hoffman open "Star-crossed Lovers" with stunning interwoven lines - when Cunliffe enters, the piece becomes ever-so-slow and contemplative. Stafford's trumpet and Hofmann's flute in unison on the boppish title track makes for a bright and bouncy piece while Garnett's sprightly brush work give both the flautist and pianist a sweet cushion for their romp through "Sweet Andy." "Reunion" adds the clarinet to the mix and the contrast of Hofmann's high tones with the burnished woody sound from Peplowski plus Cunliffe's melodic work make this track another high point on the collection.
"Three's Company" (and Two's pretty darned comfortable as well) is the 5th time Holly Hofmann and Bill Cunliffe have recorded together. Their musical interaction on this CD is impressive and quite musical.  There are moments that remind this listener of Jan Garbarek & Art Lande's classic "Red Lanta" recording (ECM, 1974) but this has more blues and joy.  To find out more, go to www.hollyhofmann.com.
Posted by Richard B. Kamins at 11:01 PM