The Past Informs the Present 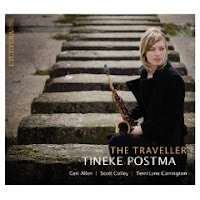 The Traveller - Tineke Postma (EtceteraNOW) - This is Dutch saxophonist/composer Postma's 4th CD as a leader and it's a delight-filled 55+ minutes of music.  One can hear the influence of Wayne Shorter in her fluid soprano saxophone work, her open compositions and sense of sonic adventure.  Joining her are pianist Geri Allen, bassist Scott Colley and drummer Terri Lyne Carrington (who appeared on the saxophonist previous CD), a splendid rhythm section.  On the opening track, "Song for F", Postma plays call-and-response with her soprano and alto saxophone - the wordless vocals of Anne Chris (fellow Dutchman, solo artist with a release on Challenge Records) adds another sweet color to the mix.  Allen's solo is a delight as well, ranging from short, single note phrases to longer melodic flights.  Chris returns on "Adagio 13 - Heitor Villa Lobos", working with and below the soprano on the theme and solo. The rhythm section moves effortlessly below the front line.
Other highlights include the fast-paced "Cabbonal" (with its riveting piano solo) and the slinky "YWC" that closes the program (one hears the influence of Weather Report in the funky soprano, wordless vocal, liquid bass lines and Ms. Carrington's propulsive drum work.)
There's not a weak track on this recording.  Everyone plays with grace and intensity, the compositions have strong melodies, and the solos are seemingly free of cliche.  On subsequent listens, the influences drop away and what remains is very good music, a balm to the hardships of daily life.  For more information, go to www.tinekepostma.com. 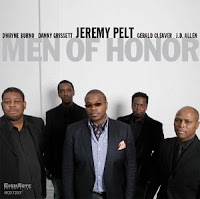 Men Of Honor - Jeremy Pelt (HighNote Records) - The influence of the mid-60s Miles Davis "Classic Quintet"(with Wayne Shorter, Herbie Hancock, Ron Carter and Tony Williams) continues to be strong 4 decades after its demise.  This new CD from trumpeter Pelt shines with similar limpid melodies, open arrangements, crisp solos and an attentive rhythm section. Like Davis, Pelt is surrounded by intelligent players, the fine tenor saxophonist J. D. Allen (whose 2 trio CDs on Sunnyside are excellent), emerging talent Danny Grissett (piano), veteran bassist Dwayne Burno and drummer Gerald Cleaver. The leader makes sure that every one of the band members contributes, at least, one tune.  Cleaver's "From the Life of the Same Name" is a sweet ballad with a heartfelt tenor solo, rich piano chords, and lyrical trumpet work. Allen's "Brooklyn Bound" moves atop Cleaver's active yet shimmering percussion and Burno's melodic bass lines.  The saxophonist writes such compact pieces with short solo sections that always leaving you wanting more (Pelt's lovely flugelhorn solo is so sweet and gives way to Grissett's introspective spot.)  "Milo Hayward" (named for the trumpeter's baby boy) is lively, with active drumming and sprightly solos.
Only one of the tracks is over 7 minutes (and two are under 5) so the band wastes little time; still, the music never feels rushed (Pelt's "Illusion" is just 5 minutes yet feels complete.) The way in which the band works together to create this music is intimate and far from "manufactured" - this is a working group.  Like the Davis Quintet, this recording is a blueprint for live gigs. The songs can be stretched, rearranged, even shortened, the compositions are that pliable.  Until one can see this quintet in concert, "Men of Honor" is a sweet treat and an excellent follow-up to the band's debut recording from 2008, "November" (MaxJazz.) For more information, go to www.peltjazz.com. 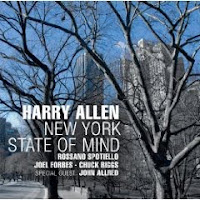 New York State of Mind - Harry Allen (Challenge Records) - I've played this disk several times at gatherings where non-jazz listeners are about and just about every one perks up their ears.  Why not?  Saxophonist (*see note below) Allen's collection of tunes, all related to The Big Apple, swings with great verve and sparkles with inspired playing. Pianist Rosano Sportiello is a new name to me but he's quite a find.  His command of different styles reminds me of Jaki Byard -  he can play stride with elan and absolutely caresses ballads (such as "Autumn in New York.") The rhythm section of Joel Forbes (bass) and Chuck Riggs (drums) is unobtrusive yet swings with panache.  Trombonist John Allred appears on 6 of the 11 cuts and his burry tone is a smart match for Allen's sometimes clean, other times breathy, tenor sound.
Allen's playing certainly has its roots in Coleman Hawkins, Ben Webster and Lester Young - I know that but the average listener doesn't and so what if they don't. My friends like it because the music, no matter the tempo, is so melodic. Allen and the band don't challenge one by "pushing the envelope". Instead they play songs that often sound deceptively easy.  On one level, they might be. Yet few musicians can play "Harlem Nocturne" so slowly without wanting to rush the beat.  Here, the quartet just caresses the melody and creates a true nocturne.  Then they turn around and "swing" the heck out of "Broadway Melody"with such joy. The title track features one of Allen's finer solos, hard to describe but easy to fall under its spell of bluesy phrases and long tones (quite like later period Ben Webster.)  Sportiello's solo on the track is so pretty, introspective without being cliched.  "Chinatown, My Chinatown", to some, may be a "moldy oldie" but here it sounds fresh and inspired, especially the hearty exchange between sax and trombone.
"New York State of Mind" is a fun experience, the kind of recording that brightens the day with its spirit. The rap against jazz is that nobody goes to concerts anymore yet look at the continued popularity of "trad jazz" festivals in the summer.  There are some mighty fine musicians whose inspirations reach back several generations and who are keeping that the traditions alive.  Allen and company do just that and it makes for good listening.  For more information, go to www.harryallenjazz.com.
*(Author's note - My thanks to Jason Crane, whose comment below reminded me of the following -  Harry Allen was born in Washington D.C. in 1966, and was raised in Los Angeles, CA and Burrillville, RI. He received a Bachelor of Arts degree in music in 1988 from Rutgers University in New Jersey, and currently resides in New York City.  I originally stated he was British.)
Posted by Richard B. Kamins at 9:56 AM