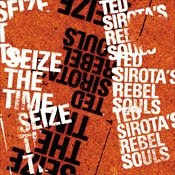 Seize The Time - Ted Sirota's Rebel Souls (NAIM) - Drummer/composer Sirota is a jazz activist in the manner of Charles Mingus and Max Roach with influences as far-ranging as Curtis Mayfield and The Clash.  He's not afraid to mix his music and politics (listen to his interview with Jason Crane by clicking here) but even those folks who don't pay attention to politics will be moved by the music he makes.  Flanked by Geof Bradfield (tenor sax, bass clarinet), Greg Ward (alto sax), Dave Miller (electric guitar) and Jake Vinsel (acoustic and electric basses), the drummer creates a program that blends music by several of his influences with fine originals.  The CD starts with 3 pieces from those influences, "Clampdown" (The Clash), "13 de Maio" (Caetano Veloso), and "Free Cell Block F, 'Tis Nazi USA" (Mingus) as well as a gospel-soaked rendition of Stephen Foster's "Hard Times (Come Again No More.")  It's easy to get lost in the calypso rhythms of Veloso's tune without knowing the song celebrates the day slavery ended in Brazil.  Mingus's tune is quite melodic and rhythmical, a work written in the 1970s whose title reminds us that all men are not created equal in the eyes of a corrupt government.  Other highlights include the drummer's dub-soaked "Killa Dilla" and Ward's funky yet progressive "The Keys to Freedom."

Though this music celebrates freedom, it's not a chaotic free-for-all. Some of the beats are pretty heavy yet each song has a distinct melody (even Sirotta's unaccompanied tribute to Max Roach, "Viva Max!", has a melody line.)  The solos are, for the most part, short yet most are well thought-out.  No matter your politics, "Seize The Time" is powerful creative music that offers much to the willing listener.  For more information, go to www.tedsirota.com. 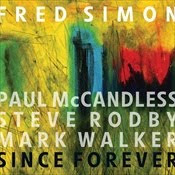 Since Forever - Fred Simon (NAIM) - Fred Simon has been an active musician/composer for nearly 4 decades.  His music, as displayed on this fine CD, straddles the lines between jazz, adult-contemporary, and popular song.  With a sharp rhythm section (bassist and co-producer Steve Rodby and percussionist Mark Walker) and the strong reed playing of Paul McCandless (soprano sax, oboe, english horn, bass clarinet, duduk), Simon's compositions create aural paintings that invite listeners to sit back and get lost in the sounds.  McCandless has always been an expressive player (best known for his work with Oregon) and he never relies on cliches to get through a solo.  His use of the double reed duduk on "Song of the Sea" is highly evocative and gives the piece a stately yet mysterious presence.
"No War Nowhere" has a sprightly rhythm and lyrical melody and Simon's two-handed piano work behind the soprano sax is forceful yet supportive. "Simple Psalm" rises sweetly above Walker's active cymbal and percussion work, with a melody that is soulful and touching. The inclusion of Joe Zawinul's "In A Silent Way" is a perfect compliment to Simon's originals pieces and could be viewed as a sonic template for the program.
"Since Forever" is music for the colder months in that it easily warms the soul of the listener.  But, it's also music that rises easily on the breezes of spring and summer.  Some readers may perceive the words "pretty" and "sweet" as describing light or inconsequential music but Fred Simon's CD is mature, intensely melodic, and a balm to the darkness of the "real" world.  For more information, go to www.naimlabel.com/recording-since-forever.aspx. 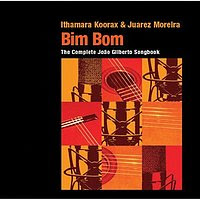 Bim Bom: The Complete João Gilbert Songbook - Ithamara Koorax & Juarez Moreira (Motema) - Voice, acoustic guitar and the music of João Gilberto, who could ask for much more, especially when the vocalist is the highly impressive Ms. Koorax.  How best to describe this CD?  The words "lovely" and "intensely melodic" easily come to mind. It's so easy to fall under the spell of this short (barely 41 minutes) but ever-so -sweet.  Guitarist  Moreira is up to the task of playing melodically yet keeping the rhythms flowing on the uptempo tunes, such as the title track and the disk's only purely instrumental piece, "An Embrace to Bonfa."  The hypnotic "Undiu", with its droning low strings and nearly wordless vocals, is one of the finer cuts as is "Valsa (Bebel)", written for Gilberto's oldest daughter (who now is one of the most popular singers from Brazil.)  The latter track features an overdubbed guitar solo and has a sound that might have influenced the songwriting of Paul Simon. Moreira overdubs electric guitar on the English language version of "Hô-ba-lá-lá" that closes the program.
Ithamara Koorax has such a fine voice with an easy delivery that rings true throughout the program.  Moreria's guitar is the perfect partner, always supportive, with clear, articulated, lines and short pithy solos. João Gilberto's music has rarely sounded better.  For more information, go to www.motema .com or www.itharamakoorax.blogspot.com.

Here's the title track of the CD, courtesy of Motema Music and IODA/Promonet.