Resonating Through The Decades

Over the past seven years, Resonance Records has done a excellent job of rejuvenating the jazz career of guitarist Wes Montgomery. Not that his more famous CTI records demeaned him but this slew of albums serves as a reminder of just how good a soloist he could be, how adventurous he and the various musicians he played with could be, and, in several cases, serves as a history lesson for present-day listeners. Several of the albums comes from the period just before (or immediately after) the guitarist signed with Riverside Records. 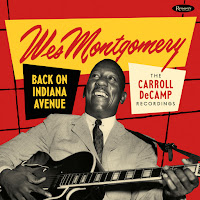 The new two-CD set, "Back on Indiana Avenue: The Carroll deCamp Collection", is the sixth release from Resonance and hearkens back to their 2012 album "Echoes of Indiana Avenue."  As in many of the label's releases, there is a great back story to his the tapes were made and how they came into the hands of Zev Feldman at Resonance - watch the video below for more information.   As for the sessions, they are broken into three different sections, including "piano quartets with guitar, piano, bass, and drums plus organ trio and two tracks of piano sextet all on disk one while the overwhelming majority of disk two is "Nat "King" Cole-style trios with piano, bass, and guitar.  Because Mr deCamp did not keep notes (or they were never discovered), no-one is positive of who plays on what track (save for organist Melvin Rhyne, trombonist David Baker, and tenor saxophonist David Young.  Bass players include Wes's brother Monk and Mingo Jones while drummers are identified as Paul Parker and Sonny Johnson.   Pianists are a bit harder to pin down but the ones that are listed include Earl Van Riper, John Bunch, Carl Perkins, and another Montgomery brother Monk (who just may be the pianist on the two horn sextet tracks

For those of us who grew up in the 1960s and later, many do not how about the myriad clubs in African American communities around the US.  Cities such as Chicago, Detroit, Washington D.C., Baltimore, Philadelphia, Kansas City, and elsewhere had a street or streets dedicated to bars that presented live music, often seven days a week.  Musicians were able to hone their skills, work on new material, entertain and educate audiences night after night.  Indianapolis, Indiana, the city in which the Montgomery Brothers were born and where they returned after the family moved to Columbus, Ohio, had several clubs in the Indiana Avenue area that catered to jazz and late night sessions. 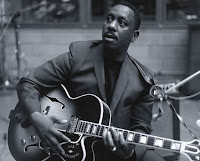 "Back on Indiana Avenue" features music recorded from the mid-to-late 1960s (and, perhaps some tracks from the early 60s).  Wes's signature octave playing is in full bloom but so are his rapid-fire single-note runs and delightful rhythm work. One can hear the influence of Charlie Christian on his attack as well as the horn-like solo style of Les Paul. Check out the piano quartet on "Stompin' At The Savoy"for the Christian influence but make sure to dig brother Monk romping on the piano.  Dr. Lewis Porter's excellent notes state a number of these tracks may have recorded at Montgomery's home.  Dr. Porter, who is an excellent pianist and educator, theorizes that Buch appears on several cuts on these recordings plus Carl Perkins, another fine Indianapolis native, swings lustily on the final cut, "The Song Is You."  No matter who's playing, the music really turn on the audience (someone or ones is clapping in rhythm in the piano solo).

If you're a Wes Montgomery fan, you'll want "Back on Indiana Avenue - the Carroll deCamp Recordings" for many reasons.  If you're new to his music, perhaps the studio recordings on Riversde and Verve are the place to start.  Nevertheless, this is music that is filled with spirit and joy as well as a numerous splendid solos.  Dig it!

Pianist and composer Bill Evans (1929-1980) is another artist whom Resonance Records has shown in a new light.  Two albums, "Some Other Time: The Lost Session from The Black Forest" (2016) and "Another Time: The Hilversum Concert" (2017), added to the mystique created by 1968's "Live at The Montreux Jazz Festival" (Verve Records), hitherto the only recording to feature Evans and bassist Eddie Gomez with drummer Jack DeJohnette. The more recent albums were both recorded within five days of the Verve release and show the Trio in full flight, the pianist truly enjoying the experience, especially on the "The Hilversum...." session. 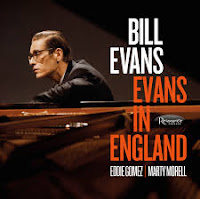 DeJohnette was gone by the end of that summer. Marty Morell joined the group, staying for nearly seven years. The first Evans release on Resonance was 2012's "Live at Art D’Lugoff’s Top of The Gate" - that album, recorded in October of 1968, just weeks after the Morell entered the scene, comes from tapes made by label owner George Klabin, then 18 years old.  Now, the label presents "Evans in England", an 18-song two CD recorded when the Trio spent four weeks (basically the month of December) in residence at Ronnie Scotts in London.  The musicians are in sync throughout, having not only spent the past year playing together but also having the luxury of playing the same venue for an extended period of time.

You can really hear the camaraderie of the three musicians on these songs.  How much they swing together, how both Gomez and Morell play quietly on the ballads, and how much the rhythm section pushes the pianist during his solos.  There are several Evans classics, such as "Re: Person I Knew", "Waltz For Debby", and "Polka Dots and Moonbeams" that closes the second disk.  "Waltz..." has a delightful unaccompanied piano opening that leads to a more spirited reading of the tune.  When Gomez steps out to solo, the song speeds up appreciably.  It's a treat to hear Morell's brushes dancing on the snare and cymbals before he returns to hs sticks.  It's fun to hear the trio play Thelonious Monk's "Round Midnight" - the pianist had great respect for Monk's piano work as well as his compositions. Evans plays up the melodic and harmonic sides of the song while the bass and drums play with the rhythms, making the song flow and swing. 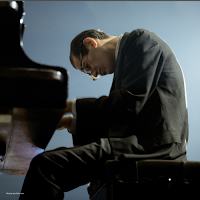 Two previously unrecorded Evans compositions made their debut during the Trio's residency.  Both "Sugar Plum" and "The Two Lonely People" are featured on Evans 1091 Columbia Records Lp, "The Bill Evans Album".  The unaccompanied piano opening  on the former tune followed by a delightful conversation between the piano and bass shows just locked in the musicians are.  Gomez plays counterpoint to Evans lovely thematic material and swings mightily during the lively solo.  The opening moments of "...Lonely People" are breathtaking in its lyricism - when the bass and drums enter, the music begins to swing but the pianist maintains his more introspective approach. Evans expands upon his solo near its close, picking up on the energy that his bandmates are sending his way.  If you listened or have listened to much of the music this trio made over its time together (1968-74), you'll know they pushed each other constantly while respecting each other's space yet honoring the music and spirit of jazz.

"Evans in England" is a worthy addition to the Bill Evans legacy.  Now that there are three albums of material from 1968 and 69, you can really hear that the pianist was fully in creative flight during that time, that he had finally recovered from the untimely death of bassist Scott LaFaro in 1961.  Eddie Gomez not only plays with great verve but is so delightfully melodic that his frequent solos unfailingly stand out.  Marty Morell is the consummate accompanist, rarely "showing off" but always into the music. Absolutely recommended!

If you want to learn more about Bill Evans, blogger and author Marc Myers is the person to read (he adds much to the album liner notes). Go to www.jazzwax.com and search for the numerous postings he's done on the pianist!
Posted by Richard B. Kamins at 1:33 PM