Eric Alexander began playing his tenor saxophone over three decades ago as a freshman in college (he had started on clarinet then moved to alto sax in high school) and, judging by his constant touring and ever-growing discography, has no intention of stopping.  After transferring to William Paterson College in New Jersey, he came into contact with pianist/educator Harold Mabern (a relationship that continues to this day) and studied with Joe Lovano and Rufus Reid (and a host of other fine musicians. After college, he moved to Chicago, began a recording career (his 1992 debut, "Straight Up", was issued by Delmark Records) and soon began a career that has taken him around the world. 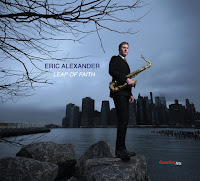 "Leap of Faith" is Alexander's debut for Giant Step Arts, the new label started by Jimmy and Dena Katz. For long-time fans of the saxophonist, it's one of the few opportunities to hear him moving away from the hard-bop sounds that have been his bread-and-butter over the decades.  In fact, on the opening two tracks ("Luquitas" and "Mars"), one can hear the influence of John Coltrane in his powerful phrases and gutsy sounds.  Plus, this s a trio date - no piano (save for the saxophonist's piano chords on "Corazon Perdido") - and that "freedom" helps to open new avenues for Alexander's music.  Joining him on this journey are bassist Doug Weiss (a fellow William Paterson grad whose career has seen him work with artists such as Pete Seeger, Brian Blade, Lizz Wright, George Coleman, and many more) and drummer Johnathan Blake. 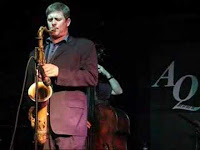 Recorded live at The Jazz Gallery in New York City, the music often crackles with great energy.  The trio digs into "Hard Blues"; not the Julius Hemphill tune but a short yet equally powerful blues "shout" that opens with Alexander, solo, pushing quite hard.  "Big Richard" is also a ballad, a piece that the saxophonist wrote for his father who had recently passed.  This piece is quite gentle, the saxophone traveling over the melodic bass lines and Blake's active yet sensitive brush work.  There's more than a touch of the blues here as well yet the overall feel is one of reflection and memory.

And there's fire - "Frenzy" lives up to its as the rhythm section sets a torrid pace for Alexander to push against and to ride atop.  The saxophonist often stays in the tenor's mid-range but he certainly plays with great passion.  He utilizes a wider range on "Mars" and it's a joy to hear how Blake's rampaging drums push the saxophonist to let loose.  Alexander is in quite the playful mood and infuses the piece with the joy of playing.

"Second Impression", the longest track on the program (13:28). closes the album with more energy.  A bit of Sonny Rollins, some more Coltrane, Don Byas, Hank Mobley - pick whoever you choose - Alexander flies high, soaring over the powerful rhythm section (dig Weiss's rollicking bass lines and Blake's insistent drive). He plays and plays, never tires, for the entire piece. It's quite the performance. Play the track loud and imagine the excitement of being in the audience as the trio blazes its way.

"Leap of Faith" is quite the leap for Eric Alexander. Even if you have any or many of his albums, you know he always plays with great energy and thought. Yet, this album, this trio, this music, this setting, opens his big sounds even more, his ideas and phrases often leaping with joy, his ballads even more emotional.  Kudos to Doug Weiss and Jonathan Blake for their splendid work and to Jimmy & Dena Katz for creating the platform for Alexander to make such passionate music.

The album will be issued on May 17.  In the meantime, here's the opening track:

Alto saxophonist, pianist, and composer Michaël Attias, born in Haifa, Israel, and raised in Paris, France, has quite the biography. His parents moved the family to Minneapolis, MN, when he was nine and exposed him to all sorts of music including recordings by Miles Davis, Thelonious Monk, and Ornette Coleman. Coleman's eclectic work led the 15-year old Attias to the alto saxophone and he began a life-long journey that took him back to Paris for college, to Connecticut to study at Wesleyan University, and onto New York City and collaborations with Anthony Braxton, Oliver Lake, Paul Motian, and many others.  As a leader, he has worked and recorded with trumpeter Ralph Alessi, bassist John Hébert, drummers Tom Rainey, Nasheet Waits, and Satoshi Takeishi, plus pianists Aruàn Ortiz and Matt Mitchell - many of his albums can be found on the Clean Feed label. 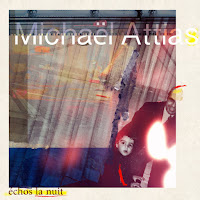 "Échos la Nuit" (released on bassist Adam Hopkins' Out of Your Head Records) is his first solo album. Recorded in one day (in just over an hour!) in a French studio, Attias plays alto sax and piano at the same time; every once in a while, he utilizes the inside of the latter to help enhance the sound of the former.  What stands out is how quiet the music is. The opener "Echoes: I - Mauve" sets the tone for the program with its combination of long, winding, alto sax phrases and spare piano accompaniment. The pictures Attias paints often are ethereal yet the attentive listener can intuit that while he is searching as he plays, the music tells stories have deeper meaning.  "Grass" blends long breathy saxophone notes and silence to evoke a quiet night, as if the musician is staring across a big field at the distance.  "Autumn I" and "Autumn II", with the piano and saxophone often in unison, has the simple yet emotional feel of composers Erik Satie and Morton Feldman. 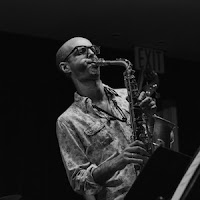 Still, one Attias has distilled this music from his years traveling the world as well as the work he has done composing for theater.  The dramatic circular lines and popping stops of the saxophone on "Rue Oberkampf" have an undeniable energy while the deep piano notes  mixed with the airy alto sax melodies on "Sea In The Dark" have a stillness that is sheer poetry.

With "Échos la Nuit", Michaël Attias has invited the listener into his world of creativity, a world of (mostly) calm exploration mixed with wonder.  Just as the music does not hurry or even scurry, take your time to allow the sounds to float in your room and into your mind. Those sounds have the clarity of an ECM recording and an emotional pull that keeps one returning to these songs time and again with renewed wonder.

For more information, go to www.outofyourheadrecords.com/michael-attias.