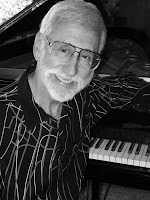 I have had the pleasure to write about Dr. Denny Zeitlin and his music numerous times over the past decade. We have spoken several times and I remain amazedly by his energy, his devotion to his music, his practice, and his students (he teaches Clinical Psychology at the University of California/ San Francisco and sees patients in the "City by the Bay" as well as in his current hometown of Kentfield, CA). His professional music career started in the early 1960s, playing acoustic before getting deeply involved with synthesizers (still is, to this day). He may be best-known for his absolutely scary soundtrack to the 1978 movie "Invasion of the Body Snatchers."  Several generations of "Sesame Street" viewers learned to count to 10 with the music he created for the then-Public Television program. 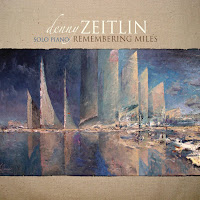 Over the past five years, Zeitlin has played yearly solo piano concerts at the Piedmont Piano Company in Oakland CA. He has the pick of the pianos in the showroom. In 2016, Sunnyside released his December 2014 presentation "Early Wayne", the compositions Wayne Shorter - now the label presents "Remembering Miles".  Recorded in December 2016, the concert features an overview of Mies Davis's amazing career, from early songs such as "Milestones (1947 Version" to "Tomaas" from the trumpeter's 1986 "Tutu" collaboration with bassist Marcus Miller.  Left to his own devices, the pianist makes each song sparkle with inventiveness and spirit, melody and emotion.  You may not recognize "Flamenco Sketches" on first listen but it's easy to hear how the piece takes shape. Zeitlin has great fun deconstructing Cyndi Lauper's "Time After Time" (check out the rhythmical and playful left hand).

Hard to pick out a favorite track but one of the more interesting ones is the afore-mentioned "Tomaas."  The 1986 recording is quite funky (a la Chic) whereas here, Zeitlin plays inside the piano and has also prepared strings - it's as if he's duetting with slide guitarist. But, when the slinky bass line comes in, the music changes direction, starting to roll forward and the melody line emerges.  Now the right and left hands are in a call-and-response and the listener hears the original funky nature. 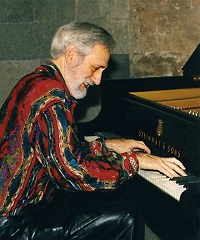 The album closes with two songs that have their origins in the 1950s.  "The Theme" comes from a 1955 Art Blakey & The Jazz Messengers session - you may have it played on several of Davis's live albums (he used the tune int the 60s). Put simply, the music swings. The rolling bass lines and the percussive attack of the left hand is a delight.  "Weirdo", from a 1954 Blue Note quartet session (bassist Percy Heath, pianist Horace Silver, and Mr. Blakey on drums) gives the pianist a lot to play with; it's bluesy quality, the rolling gait, and flowing solo lines.

Denny Zeitlin is a master.  His love for this music comes shining through the notes he plays and how he rearranges the songs so you hear them anew. "Remembering Miles" is not only a tribute to the game-changing Mr. Davis but also to the elasticity and longevity of jazz.  Splendid recording, sweet sound, and great music - can't be that combination.

Take a stroll through this Benny Golson tune: 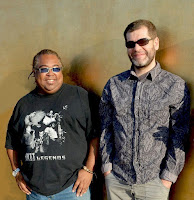 The duo of Alex Harding (baritone saxophone, bass clarinet) and Lucian Ban (piano) has been together two decades.  They first recorded on the CIMP label in 2002, releasing one album as a duo and two as a Quintet (including 2006's delightful "Tuba Project").   They have recorded with the electronic musician Silent Strike and with soprano saxophonist Sam Newsome on "The Romanian-American Jazz Suite."  Harding has worked with Julius Hemphill's Saxophone Sextet, with the Sun Ra Arkestra, and with fellow baritone saxophonist Hamiet Bluiett's Baritone Group. He has appeared on recordings by David Lee Roth (!) and Greg Osby.   Ban has led groups with violist Mat Manieri, saxophonists Evan Parker and Abraham Burton plus earlier this year, released a duo album with clarinetist Alex Simu.  The pianist has also issued several recordings that reframe the music of Romanian composer George Enescu. 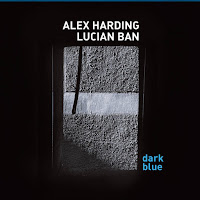 "Dark Blue" (Sunnyside Records) is their first duo album since 2002's "Somethin' Holy". The music ranges from exploratory  ballads such as the title song and Harding's solo tribute to the late Bluiett ("H.B.") to the meditative, Erik Satie style "Chakra" and the more "open" "Tough Love."  On baritone, Harding likes to mine the lower tones as well as use the "keys" to play percussion. His bass clarinet work has a lilt ("Esto") as well as a bite to it ("The Invisible Man").  Ban is never intrusive, providing excellent support plus rhythmic excitement (a touch of Chick Corea on "Black Sea") and a sense of melodic wonder as he does on his solo piece "Low Country Blue".

The duo's use of silence and interaction on "Monkey See", how Harding uses the piano as a springboard as well as to speak to, and how Ban keeps the music flowing with his phrases and spare bass lines, all combine to keep one's attention.  Listen to them "testifying" on the gospel-influenced "Not That Kind of Blues" - the melody suggests Herbie Hancock's "Watermelon Man". Ban puts a lot of boogie-woogie into the piano backing as Harding roars, struts, and dances on top of the rollicking keys.


"Hymn" closes the 11-song program on a hopeful yet solemn note.  Ban's lovely introduction opens to let Harding's melodic and breathy baritone melody. The pianist composed the song and you can hear his hope and love for a better world come out in the performance.

Alex Harding and Lucian Ban bring there friendship, musicianship, and intelligence to the forefront on "Dark Blue".  The music surrounds the listener, invites him or her in, and keeps their attention throughout. Take a chance on this album - there are many rich moments in the music. 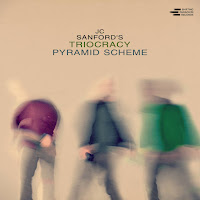 Trombonist JC Sanford may be more recognizable these days as a conductor than as a composer/performer.  He is a protégé of Bob Brookmeyer, creating two big band albums (one with composer David Schumacher): the last several years, he has been busy conducting the large ensembles of John Hollenbeck, guitarist Joel Harrison, trombonist Alan Ferber, pianist Frank Carlberg, and the late Alice Coltrane.  He also leads several smaller groups including a quartet (the JC 4) and the three-piece band known as Triocracy. That latter group, which features Andy Laster (alto sax, baritone sax, clarinet) and Chris Bacas (tenor sax, soprano sax, clarinet), came together in the mid-200os, recorded its debut album in November of 2014.  Sanford, who won two grants in the past year, used a portion of the money to finally release  the recording.

"Pyramid Scheme" is finally available thanks to the Minneapolis, Minnesota-based Shifting Paradigm Records.  The 13 tracks include seven pieces from Sanford, three short improvised pieces, and one song each from Billy Joel, Stevie Wonder, and George Frederic Handel. Though the program is just a shade over 44 minutes long, there's a lot to take in.  The title track opens with the three musicians playing the theme, goes into another short section, back to the theme, and then, the separate voices begin to go there own way away from and back to the theme.  There's a hint of Julius Hemphill in the bluesy "Everything We've Always Wanted" starting with the bouncy baritone sax line, the trombone counterpoint, and Bacas's tenor sax solo. There's a different  kind of bounce to "Bagheera's Dance", a piece based on the trombonist's love of the Disney classic cartoon based on "The Jungle Book." Sanford created a melody out of the baritone saxophonist's last name to create "Outlaster" which breaks into a funky dance for the soprano sax, trombone, and the baritone sax.

"And So It Goes", the oft-recorded Billy Joel (at least this year it is), gives the trio the opportunity to each play the lovely melody as well as create counterpoint for the lead player.  The harmonies Sanford orchestrated for his horn, the tenor and alto saxes, sound lush and gentle.  Handel's "Sarabande" (from the third movement of his "Concerto for Oboe in G minor") also contains lovely three-part harmony as well as a fine soprano line. The Wonder song, "You and I" (from 1972's "Talking Book" album), has an expansive melody line that the trio plays in harmony.  Laster's tenor solo is played alone, a finely etched interpolation of the melody. 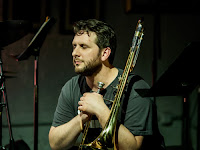 As for the improvisations, they range from the bumble-bee freneticism of "Quick Change (#5)" to the odd call-and-response of "Time Parameters (#3)" and it's nervous trombone, fluttery soprano sax, and noisy alto sax.  "Something Chordal (#4)" is exactly what it purports to be, the three musicians creating long tones and the occasional group chord.  That track is quite handsome and even more striking for the fact it's totally improvised.

"Pyramid Scheme" may have taken four-and-a-half years from the studio sessions to the final product but the music sounds contemporary.  JC Sanford's Triocracy debut is an often exhilarating blend of sounds and styles of composition with and without improvisations.  And it's fascinating to sit and listen to.

Here's a track to tickle your fancy: