The Sounds of America's Past, Present, & Future 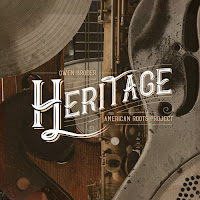 Owen Broder, saxophonist, clarinetist, flutist, and composer, has just released his first album as a solo artist.  "Heritage: The American Roots Project" (artistShare) is a fascinating and rewarding combination of different tunes from traditional American forms such as bluegrass, spirituals, early blues, and more with improvised music. Broder has assembled quite the octet of musicians; besides his woodwinds, there's the expressive violin of Sara Caswell, the formidable brass of Scott Wendholt (trumpet, flugelhorn) and Nick Finzer (trombone) as well as the rhythm section of James Shipp (vibraphone, percussion), pianist Frank Kimbrough, bassist Jay Anderson, and drummer Matt Wilson. Several tracks features the voices of Kate McGarry, Wendy Gilles, and Vuyo Sotashe. Composers include the leader, Miho Hazama, Ryan Truesdell (also the producer), and Aphonso Horne. Each composer supplied arrangements for their works while Ms. Hazama and Truesdell each arranged a traditional piece as did Jim McNeely and Bill Holman.

The program is a treat from beginning to end.  Opening with Broder's "Goin' Up Home" with it's haunting melody that suggests a blend of bluegrass and an Appalachian folk song, the piece begins with, of all things, vibraphone before the violin and trombone introduce the melody.  The band enters and the melody is repeated yet listen to the hypnotic background created by the piano and vibes.  Shipp steps out for the first solo over a fiery hard-bop rhythm while the other instruments add harmonies and short counter-melodies.  Finzer solos over the droning violin with the vibes snd piano now adding counterpoint.  Holman's "Jambalaya" is a delight-filled deconstruction and reconstruction of the song that was a big hit for Hank Williams (who took credit for the song that was co-written with pianist Moon Mullican - the pianist had based his song on another piece which contained melodic elements of a 1937 song titled "Alons Kooche Kooche" composed by Julius "Papa Cairo" Lamperez. Click on this link to find out more). This rendition swings with a "cool" feel, featuring fine solos from Ms. Caswell and Wendholt. 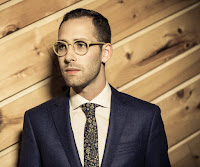 Ms. McGarry and Ms. Gilles share the lead vocals on "Wayfaring Stranger" (arranged by Truesdell.  The opening is quite dramatic, the piano and bass leading the songs in while the bass clarinet moans quietly below.  The vocal harmonies  are lovely, with Ms. Gilles moving in and around the lead, at times singing in unison or either above and below Ms. McGarry's melody line.  The song also features a long, melodic, bass solo from Anderson.  Vuyo Sotashe takes the lead on Horne's "The People Could Fly": the melody is based on a line the composer heard from a storyteller, the rhythms delightfully South African, and the story an African American folktale. It's a rollicking good time.  The assembled voices (wordless) support the opening melody on the final track "A Wiser Man Than Me."  Broder's expressive baritone sax leads the way through this New Orleans-inspired gospel tune, a sweet coda to a fine program.  And don't those unaccompanied voices sound sweet closing out the piece.

"Heritage" the American Roots Project" comes at a time when young people's belief in the "American Experiment" is at its lowest ebb in years. This music serves as a reminder that we are truly a nation of immigrants, that artists and musicians are inspired by the various cultures encountered in their daily and working life, and that imagination and improvisation can help open eyes to new possibilities.

To learn more, go to www.americanrootsproject.com. 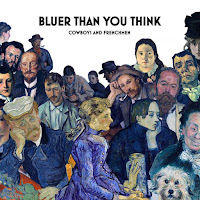 Owen Broder is also a member of the quintet Cowboys And Frenchmen whose second album, "Bluer Than You Think" (Outside In Music) was issued in October 2017.  Broder plays alto and baritone saxophones and is joined in the front line by fellow alto saxophonist Ethan Helm (who doubles on soprano sax). They each contribute three of the seven tunes with one from friend, trombonist, and conceptual artist Chris Misch-Bloxdorf (whose work you can find under the nom-de-plume Artie do Good). The rhythm section includes pianist Chris Ziemba, bassist Ethan O'Reilly, and drummer Matt Honor. The band came together in 2014, taking its name from a short film by David Lynch ("Twin Peaks"), with the intent to blend "traditional American folk and pop music with elements of contemporary R&B and modern jazz"  (www.cowboysandfrenchmen.com). 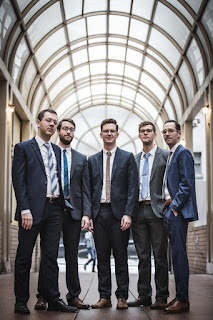 The music does defy expectations.  There's the tension-filled "Beasts" (with a Steve Reich-like rhythm and the feel of a piece by the Claudia Quintet), the funky, swaggering, "Companion Plan" (listen to how the bass, piano, and drums create an atmosphere that may remind some of Steely Dan, and "Wayfarer", the quintet take on "Wayfaring Stranger" (the baritone sax taking the lead here before it joins the alto sax for a hypnotic melody).  Ziemba's piano solo on the last track has elements of Jewish liturgical music as his lines sway and slither over the over the bass and drums.

"Clear Head", the song written by Misch-Bloxdorf, opens with the soprano and alto saxes playing a pleasing melody with support from drummer Honor. Then it drops into a rapid-fire beat, falling back to half-time and then rubato. There are several tempo variations as the soprano sax delivers a rousing solo.  Helm's ballad "Lilies Beneath a Bridge" has a handsome melody played by the alto saxes that are just slightly off-kilter creating a doppler effect.  Ziemba's sweet yet bittersweet piano solo is a highlight but so pay attention to the rhythm section supports and prods him forward.

"Bluer Than You Think" is one of the more playful, diverse, surprising, and pleasing albums of the past year.  Tradition takes a back seat to invention and experimentation while most of the pieces have intelligent and lovely melodies.  Several of the tracks show the influence of The Bad Plus (especially the powerful "C&F Jam", though the piano solo has a lot of Keith Jarrett as well). All told, Cowboys And Frenchmen deserve your attention with its challenging and rewarding music. Here's a track to whet your appetite: