Such Delight in Duos 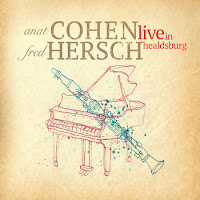 What do you get when you pair a clarinetist whose ability to play so many different types of music with a master pianist and composer who is always "thinking" forward without ignoring his roots?  Judging by the opening track of "Anat Cohen & Fred Hersch" Live in Healdsburg" (Anzic Records), you get "A Lark." "A lark" is defined as "something done for fun, especially something mischievous or daring; an amusing adventure or escapade" (Oxford English "Living" Dictionary). This album, a recording from the June 2016 Healdsburg (CA) Jazz Festival, certainly has its moments of mischief but, overall, this is "serious fun" music at its best.


The program opens with two Hersch, the aforementioned "A Lark" and one of the pianist's more adventurous composition "Child's Song."  The latter tune moves from its richly melodic opening into a gentle rolling melody. After the duo plays the melody, the pieces moves into a rubato section for Ms. Cohen's delightfully ascending solo before the duo takes the piece a bit "out" - here, it reminds this listener of Jimmy Giuffre's early 1960s work with Paul Bley and Steve Swallow.  And it's a treat to hear how they bring the song back to the theme.

Ms. Cohen's composition "The Purple Piece" (first recorded in 2007 with her Quartet on the "Poetica" album) follows. Slower than the earlier version, it goes in several directions and moods, starting out somber then becoming more open and playful during the clarinet solo. Pay attention to how Hersch accompanies the solo and just how closely he's paying attention to his musical partner. The pianist's solo is a pleasing two-handed journey that is also emotionally rich. 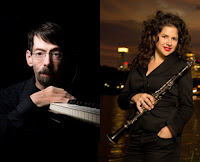 The album also includes a number of recognizable standards ("Jitterbug Waltz", "The Peacocks", "Isfahan", and "Mood Indigo") but, surprisingly for a Fred Hersch album, no Thelonious Monk. Nevertheless, the listener should enjoy how the duo approaches the classic jazz tunes.  Jimmy Rowles oft-recorded "The Peacocks" is a fascinating 10:25 journey with Ms. Cohen, at first, caressing the melody, giving the song a bluesy feel. Hersch's solo is breath-taking, also referencing the blues yet with such dynamic and melodic variation.  When the clarinetist returns, the duo slows down the piece, making the music shimmer and the listener hang on every note.

For the encore, the duo take a slow stroll through the elegant Ellington composition "Mood Indigo". There are moments here (and elsewhere) where this listener as is the pianist is creating a very fancy "rent party." Ms. Cohen enjoys the challenge, dancing with her partner on "Jitterbug Waltz" and Hersch's "Lee's Dream" where she is darting in and out of his solo with quiet flurries of short phrases.  "Live in Healdsburg" is a gift from two distinctive musician, Anat Cohen and Fred Hersch, both of whom play with such joy and "daring", on "a lark" when they hit the stage to make the listeners smile. 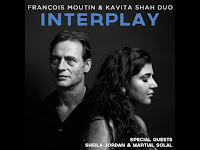 Vocalist Kavita Shah first came to critical attention with her fascinating 2014 album "Visions" (Inner Circle Music), an adventurous collection of songs co-produced by guitarist Lionel Loueke (my review here). Bassist François Moutin has been playing since he was five years old, first on guitar and piano, then moving to the bass in his teens.  After earning a doctorate in physics, he became a professional musician.  Before coming to the United States in 1997, he had worked with artists such as pianists Martial Solal and Jean-Michel Pilc. Since settling in the New World, Moutin has never lacked for steady work, playing alongside Billy Hart, Rudresh Mahanthappa, Vijay Iyer, Oliver Lake, and Dave Liebman (among many others).

When the bassist approached Ms. Shah to create this duo (he had first met her when she subbed in trumpeter Amir elSaffar's ensemble), the vocalist felt it was the right time.  She has studied music from around the world and has worked with numerous artists. Born in New York City, she studied with Theo Bleckmann, Jim McNeely, and Peter Eldridge.  A chance meeting (on the subway, no less) with Sheila Jordan turned the young Ms. Shah towards the idea of being a jazz singer.

Mr. Moutin and Ms. Shah have created and released "Interplay" (Dot Time Records), an album of duos and trios (Ms. Jordan and pianist Solal are each featured with bass and vocalist on two tracks).  From the outset, one can immediately hear that Ms. Shah's voice has matured, that she is willing and able to take chances. The program opens with just voice on the standard "You Go To My Head" (first recorded as a vocal by Billie Holiday in 1938). When the bass enters, one hears a musician who has mastered his instrument.  Moutin is melodic, percussive, plays counterpoint and solos with ease as well as inventiveness.  Because is Ms. Shah is so comfortable in this setting, the bassist is free to be creative and not just hold the bottom.  The following track is an terrific romp through "La Vie En Rose" with the vocalist singing a part for tabla while the bassist pounds on his instrument. They perform the melody together with Moutin creating quite the call-and-response (with himself). 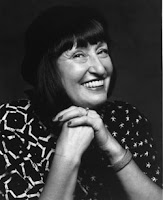 Ms. Jordan is heard on "Falling In Love (With Love)" but not until Ms. Shah dances through the melody (you can really hear the "smile" in her voice) - when Ms. Jordan enters, she sings a counterpoint to the original melody.  The two voices swap "wordless 4's) before one hears the original melody, and as a coda, the two vocalists take the piece out.  For the track of the album, the trio of voices and bass create a lovely version of Horace Silver's "Peace".   The blend is so handsome, especially because of the wonderful bass work. Ms. Jordan, who was one of the first to record with just bass accompaniment, is in fine voice (still inventive as she approaches 90!) and has taught Ms Shah (through example and friendship) how to tell a story as well as be part of an ensemble.

Monsieur Solal, who turned 90 in Augusr 2017, was one of bassist Moutin's first employers. Here, he joins the duo for a "free-leaning" exploration of his piece "Coming Yesterday" (which he recorded with bassist Gary Peacock and drummer Paul Motian in 1998). The musicians give the vocalist plenty of room but also follow her through the melody as the song moves forward. The pianist is also featured on "Aigue-Marine" (green-blue), an original he first recorded in 1962 and to which Ms. Shah composed the lyrics. The music has the feel of Bill Evans, the melody opening to playful solos (it's fun to hear the piano and bass scurry around).

There's much to enjoy here.  François Moutin is quite the musician, such a melodic and inventive bassist. Kavita Shah is also quite a musician, with a mature voice that holds your attention and seemingly no fear. One can't help but hear how the duo has built up trust in each other.  There are surprises throughout "Interplay" but the focus is on creativity and excellent musicianship.  Get this, sit down, then let the sounds into your heart and mind.

Here's one of the pieces with Martial Solal: