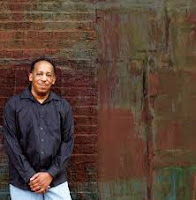 I have been wanting to talk to composer and educator Anthony Branker since 2013 and the release of "Uppity", an album that addressed racism, religion, and hope.  Credited to "Word Play" and released on the Origin label, the music included "Ballad for Trayvon Martin", "Dance Like No One is Watching", "Across the Divide", "Let's Conversate" and the title track.  At the time, I was teaching a course that dealt with music as social commentary and how music, theater, and poetry often reflects the time in which it is/was created.

But, I never had the opportunity to talk with Dr. Branker, at that time the director of the Program in Jazz Studies at Princeton University, leader of the improvising ensembles, and teacher of a number of different courses (he has since stepped down and Rudresh Mahanthappa will take over the program in the Fall of this year.)  His debut album, "For the Children" (Sons of Sound Productions), was recorded in 1980 when he was a senior in the Music Department at Princeton (featuring a young Stanley Jordan on guitar) but not released until 2005.  Just 4 months later, Sons of Sound released "Spirit Songs" featuring a sextet known as Ascent including Ralph Bowen (tenor and soprano saxophones) and Ralph Peterson (drums). Dr. Branker, who played trumpet for many years but had to stop due to health issues in 1999, contributed all the compositions and arrangements. 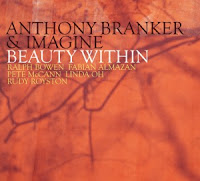 Anthony Branker's new album, "Beauty Within," has just been released by Origin Records (his 7th for the label, three each by Ascent and Word Play) and I could not resist the urge to speak with him. Not only because the music is so exciting, thoughtful, powerful, and hopeful but also because he's named this group Imagine and the music speaks to his dreams.  The quintet that plays this music lives up to its name by taking the music off the printed page and giving it vitality as well as a commanding presence. (The interview - really a conversation - will air August 21 at 12 noon on WLIS and WMRD in Old Saybrook and Middletown CT respectively - online at www.wliswmrd.net and on the TuneIn Radio app).

Ralph Bowen is here (as he has been on all of Dr. Branker's albums since 2006. Joining him is Pete McCann (guitar), Fabian Almazan (piano), and the amazing rhythm section of Linda Oh (bass) and Rudy Royston (drums), both of whom (pictured left) work with Dave Douglas Quintet and have appeared on each other's albums. It's hard to single out any one track as all nine contain music to recommend them.  The opening cut, "Joy", starts with the guitar and the tenor saxophone playing what becomes the melody and then, one by one, Royston kicks in, Ms. Oh sets the foundation and Almazan supplies the chords.  Bowen takes off on his solo flight and he really sets theme for the album, moving up through his horn's range while Royston pushes him forward amidst the impressionists sounds of guitar and piano and the underpinning of the bass.  There are moments of tenderness and reflection in the mix as well.
Ms. Oh leads the quintet on the title track with a quiet yet poetic bass solo.  Almazan (pictured left) and Bowen play the theme with McCann supplying the chords. Pay attention to how Royston works below the soloists, painting pictures with cymbal washes, fleet movements across his set, and stop-on-a-dime turnarounds.  Some might say his work is distracting but it works to motivate his bandmates.  The bassist's solid bottom sound gives the drummer the freedom to be creative and adventurous. And he takes advantage of that freedom throughout most of the album.

Also impressive is the powerful work of Ralph Bowen (pictured left).  He has such a presence on his reeds.  Listen to how he wraps his soprano sax around McCann's modified guitar on "People Everywhere", a high-energy song that also features a sparkling piano solo.  His soulful tenor over the gospel piano chords on "(God's) Wisdom" is cliche-free and quite tuneful. Bowen maneuvers the tricky rhythmic landscape on "(We Are) What We Are Not Yet", switching from soprano to tenor after the piano solo and before McCann's excellent spot.  The tenor solo on "Many Roads Beneath the Sky"  starts in a reflective and soon catches fire, thanks to Royston's insistent jabbing.

One track led me to GOOGLE.  "Loving Day (June 12)" is named for the day in 1967 when the Supreme Court of the United States struck down the anti-miscegenation laws in 16 states.  The case before the court, "Loving vs Virginia" pitted an interracial couple (Mildred and  Richard Loving) who had married and were arrested and forced to move out of Virginia. The couple brought the case to then-Attorney General Robert F. Kennedy and, several years later, the Supreme Court unanimously voted the law unconstitutional. Do you need to know that to enjoy the music?  No, but the story informs the music and musicians, adding more power to an already powerful composition. There's even more to discover on "Beauty Within" - you can sit each time you listen and concentrate on one or two musicians, hearing how each one works so well with the others. Listen for the impressive piano work of Fabian Almazan, for the razor-sharp solos of Pete McCann (pictured left), the singing tones of Ralph Bowen, the fundamental as well as melodic work of Linda Oh, and the glorious drumming of Rudy Royston.  Their life experiences, individual voices, and collective talent make the music of Anthony Branker glisten with confidence and soul.