Man of Music, Man of Nature 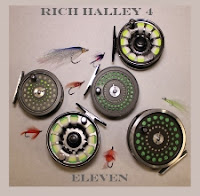 Rich Halley, tenor saxophonist and composer, hails from Portland, Oregon - born there and still lives there.  During his collegiate years, he spent time in Cairo, Egypt and several years in Chicago, Illinois.  He's an outdoorsman, into hiking, camping, and fishing plus other activities including studying rattlesnakes.  19 albums into his career as a co-leader or leader, he knows his strength and his discography is filled with excellent recordings of creative music.

"Eleven" (Pine Eagle Records) came out last Fall and features the Rich Halley 4 including trombonist Michael Vlatkovich, bassist Clyde Reed, and drummer Carson Halley (the leader's son). It was the addition of Vlatkovich (who had recorded with Halley before and the addition of his son that has made a great amount difference in Halley's music.  He had worked with trumpeter Bobby Bradford several years and one exciting live album yet Vlatkovich really fits the personality and sound of this music.  Most impressive is the work of Carson Halley; he never overplays and has a funky side that pushes this music in interesting directions.

Recorded during the same sessions that produced "Creating Structure" (March 2015 release), the album features eleven original compositions by the leader.  The previous album was all improvisations (several from earlier sessions) which illuminated just how well the quartet work together.  No tentativeness or "wailing for wailing's sake", plenty of melody and rhythmic invention, and great interaction.  All that is evident on the "composed" recording as well. Opening with the three-part "Reification Suite", much of this music moves forward on the power of the melodies and the forceful work of the younger Halley and bassist Reed.  Not only do they support the soloist but also add their own melodic counterpoint.  On the elder valley's fiery tenor solo on the first part of the "Suite", titled "Retroactive", his son really pushes hard while Reed plays a furious counter melody. The third part, "Remnant", features a throbbing bass presence, a steady yet quiet beat and a melody first played in unison then in harmony. The tenor and the trombone 'converse" during the first part of the solo section, then Vlatkovich steps out for a powerful solo followed by a storming statement from the elder Halley.  All of that takes place over the simple yet effective beat of the rhythm section.

The pulsing bass and the "popping" snare lay down quite a foundation on "Glimpses Through The Fog" and, when the tenor steps into the open, the music really hits hard. There is a touch of Julius Hemphill's "Hard Blues" in the beat Carson Halley creates for "Convolution" yet listen to how the move away from and back into the "beat" through the tenor solo and then explode as Vlatkovich takes off.

The ballads stand out as well. The buoyant bass lines on "Slider" free up the soloists and the drummer to play around the beat.  "The Creep of Time" does move slowly and features a strong trombone-bass conversation a soft and handsome tenor solo.  Bassist Reed steps out for a quick melodic solo before a return to the original theme.

When played loud in the car, the sound of "Eleven" reminded this listener of the music created by The Vandermark 5.  Both groups "articulate" well, can stop abruptly to go in a new direction, and both groups have splendid rhythm sections.  This is, arguably, the best recording from the Rich Halley 4 - yet, there are no weak or dull ones so you must judge for yourself.

4 becomes 5 when Rich Halley adds Vinny Golia to the band for "The Outlier" (Pine Eagle Records).  Golia, who can and does play just about every reed instrument he can find, sticks to baritone saxophone and bass clarinet, a good blend with the trombone of Michael Vlatkovich and Clyde Reed's forceful bass. Just as he showed throughout his career in this band, Carson Halley is both he glue and the spark plug for this music.

While Golia roars and hollers on "Green Needles", the drummer is creating quite a percussive storm. Drummer Halley's funky side is a perfect fit on the song's thematic material.  Reed's rollicking "walking lines" lead in the band on "Long Blue Road", a hard-bop romp (and a group improvisation) that, thanks to the splendid bass clarinet solo, sound like something Eric Dolphy might have created.  "Urban Crunch" is cut from the same mold except that the drummer and bass create a much "freer" landscape for the powerful solos (especially the fearsome bass clarinet playing of Golia).  Reed and Halley move in and out of the tempo with ease.  There's a playful edge to "Rising From the Plains", the pounding floor toms and thick bass tone, supporting the melody and then creating a trance feel under the baritone solo. The trombonist opens his solo echoing the final notes of Golia's romp while the rhythm section stays the course.  The tenor and baritone add short fills a la a big band.   The tenor solo covers a wide swath of musical territory and is extremely powerful. 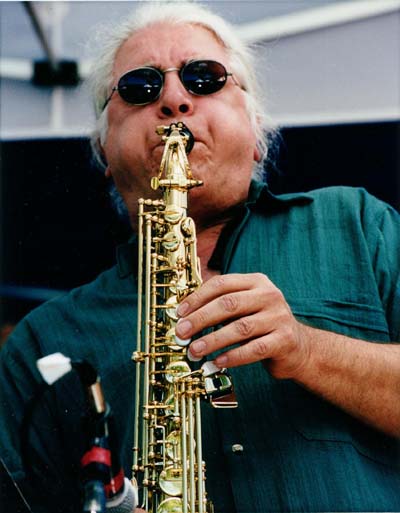 The other two group improvisations both have a different feel.  "Around the Fringes" opens with fragmented phrases from all but the drummer, sometimes together, other times in counterpoint until the rhythm section breaks into a powerful beat for a tenor solo.  "The Way Through" opens with the tenor sax and trombone in conversation over the melodic bass.  The drums enter, not setting a beat but "coloring" the proceedings.  Golia's bass clarinet serves as a counterpoint to the work of trombone and tenor  before Halley takes off on an energetic solo.  Suddenly, the piece turns into a blues rumination with the tenor setting the pace while the trombone and bass clarinet support and respond to his lines.


The album closes with its longest track (10:44), "Nuthatches";  introduced by the bass clarinet and bass, the drums (Carson Halley, pictured left) literally march right in. The tenor, trombone and bass clarinet unite to state the theme and the solos follow.  For a while, Vlatkovich bounces atop the military drumming and then plays around and behind the beat.  Golia comes in on the final notes of the 'bone solo and is soon wailing, swooping and diving, freeing up the drums while the bass holds the rhythmic center until the three are pushing each other.  Pay attention to how the rhythm changes the "feel" at the end of the bass clarinet spot; then, the drummer takes a short but powerful solo sounding like Ed Blackwell in Old & New Dreams, pounding floor toms. The elder Halley rides the percussive waves with a solo that has the feel of both late John Coltrane and the more contemporary Tony Malaby. The soft landing at the end is an appropriate close to a fine musical journey.

"The Outlier" is the work and play of the Rich Halley 5, musicians who enjoy each other's company, enjoy a challenge, and who do not settle for cliches.  This music has roots in the exploratory jazz of musicians such as Coltrane, Max Roach, Julius Hemphill, and others, all of whom took elements from blues, bebop, hard bop, "free" jazz, rhythm 'n' blues and more, continually pushing forward.  The music that Rich Halley creates sounds "of its time" as well as timeless; perhaps that is because this music is not concerned with genre but with the story the musicians are telling.

For more information about Rich Halley and these plus other recordings, go to www.richhalley.com.


Here's the Quartet version of the final track on "The Outlier":