More Voices and Their Stories 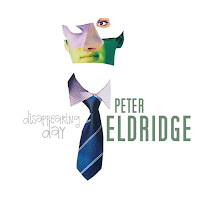 Peter Eldridge has such a wonderful vocal style; he can sing blues with great conviction, swing with great ease, caress a ballad with the best, and seems to have no fear taking chances with his music. "Disappearing Day" (Sunnyside Records) is his fifth solo album; the program is a mix of originals, covers, and standards, poems set to song, smart vocal arrangements, all built from his duo with bassist Matt Aronoff (known as Foolish Hearts) and his long association with drummer/producer Ben Wittman (Paula Cole, Lucy Kaplansky - the three men are pictured below). 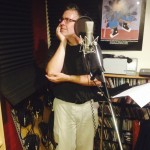 There's an intelligent take on Paul McCartney's "Jenny Wren" (from his 2005 album "Chaos and Creation in the Backyard") . Led in by Aronoff's rich bass tone, the voices, cello and violin rise together in the background as Eldridge sings the plaintive melody (the arrangement plays a subtle homage to both "Eleanor Rigby" and "Blackbird"). The leader's handsome piano solo moves the song forward with grace (Eldridge is an intelligent pianist, knowing what his arrangements need and never playing too much). For Luciana Souza's "House" (from her splendid 2004 "Neruda" album), he sings the poem over the masterful bass and active percussion then adds a fine and, ultimately, playful piano solo. Among the many highlights are the lovely vocal duet with Becca Stevens on the original "Wish You With Me" and the impressionistic "Driving To Town Late to Mail a Letter."  The latter track features a poem by Robert Bly set to an original melody, the piano, bass, drums, guitars (Marc Schulman), cello (Mariel Roberts), and wonderful voices (Jo Lawry, Alan Hampton, and Eldridge) painting the snowy evening to perfection.  For the leader's musical reading of a quote from author James Thurber, Eldridge has the Elm City Girls Choir (of New Haven CT) sing "Let us not look back in anger, nor forward in fear, but around us in awareness."

The two "standards" on the disc are given fascinating settings.  The playful "low-fi" intro to "Witchcraft" (by Cy Coleman and Carolyn Leigh) sounds like an outtake from The Beatles' "Let It Be" before breaking into a rapidly paced take with just piano, bass, and brushes supporting the vocal. The album closes with the lovely "Some Other Time" (from the 1944 Broadway show "On The Town", music by Leonard Bernstein, lyrics by Betty Comden and Adolphe Green).  Eldridge captures the inherent sadness and regret in the words while Aronoff and guitarist Jesse Lewis paint the background in a Country-Folk mood.

From the Theo Bleckmann collage on the front cover to the various moods throughout the music, "Disappearing Day" will not easily fade from your mind and heart.  Peter Eldridge, who not only makes music but also teaches voice students at the Berklee College of Music, creates songs that touch us, gently reminding one to enjoy the day, cherish the people around you, and to allow music to push away the darkness. And, he's got such a great command of his voice, a baritone with a big range who never screams at the listener but always invites one in.

For more information, go to petereldridge.com. To listen to and purchase the album, go to sunnysidezone.com/album/disappearing-day. Guitarist and composer Alex Goodman, Canadian born and raised, moved to the United States in 2012 after the release of his Quintet album "Bridges".  Since his arrival, Goodman has worked and/or recorded with bassist John Pattitucci, saxophonist Charles Lloyd, and drummer Ari Hoenig (among others).  In 2014, he won the Montreux Jazz Festival International Guitar Competition and recorded an album of "Etudes for Solo Guitar" (self-released).

His new recording, "Border Crossing" (OA2 Records), stays focussed on the "Chamber Music" sounds of his previous two recordings and expands the composer-arranger's musical palette.  He's replaced the saxophone and piano with the voice of Felicity Williams and the vibraphone of Michael Davidson, filling out the ensemble with Andrew Downing (cello, bass), Rogerio Boccato (percussion), and, on three of the seven tracks, Fabio Ragnelli (drums).  Ms. Williams breathy voice blends nicely with the instrumentalists. Right from the opening cut "Acrobat" which starts with just acoustic guitar and percussion (sounding like a Ralph Towner composition), she creates a softer elegance when matched with the guitar, cello and vibraphone.  Her wordless vocal rise above the ensemble on "Family Breakfast", paired with the vibes on the opening melody (reminiscent of the folk-jazz of the British group Pentangle).  The leader, on electric guitar, digs into an exciting solo, pushed by the active percussion and drums of Ragnelli and Boccato.  The pace slows for a restatement of the theme and then moves quietly into a fine vibraphone solo.  Pay attention to how the rhythm section (with Downing on bass) push the piece forward.

A pair of excellent covers are included in the program.  Goodman's delightful arrangement of W.A. Mozart's "Eine Kleine Gigue" captures the playfulness of the original, spreading the melody around the different voices while adding a counterpoint for guitar and vibes plus a cello spotlight. The final track is a wondrous arrangement of "Pure Imagination", the Anthony Newley - Leslie Bricusse song from "Willy Wonka and The Chocolate Factory."  Again, it's a playful take with the different voices of the ensemble moving in and out of the solo section - when the musicians move back into the lyric section of the song, Goodman does so with a classical (and delightful) flourish.  Listen closely to how the musicians create the "sound of wonder."

The album is filled with moments that capture your ear, seducing you into really listening closely.  The "conversation" that the vibes and guitar engage in at the start of "Collateral Damage", how the voice moves in-and-out of the forefront on "Style Brisé" (a piece that highlights the brilliance of Boccato's percussion), and the percussive work of Goodman, Boccato and bassist Downinn the opening of "With Thanks", a song that opens wide to feature the guitarist's most impressive solo as well as an animated percussion solo. Ms. Williams also stretches out several times through the piece (which you can watch below).

"Border Crossing" is a major step forward for a young musician with such great promise.  Alex Goodman can certainly play his instrument but, on this new album, it's his songs and arrangements that capture your attention. This is music that makes you want to open the windows and let the breezes clean out the house.  Enjoy!

For more information, go to www.alexgoodmanmusic.com.

As promised above, here is "With Thanks":