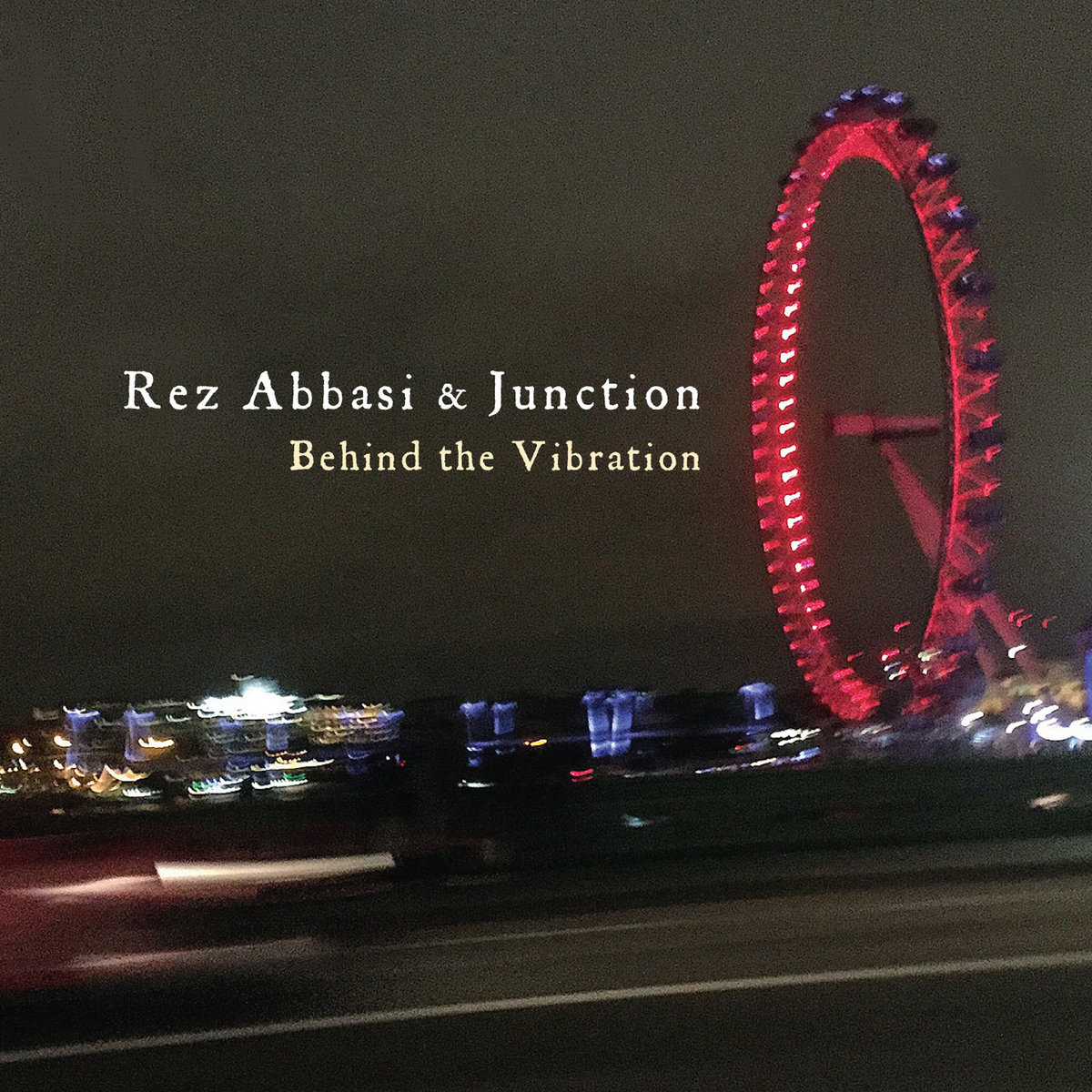 From the outset, the new album from guitarist and composer Rez Abbasi & Junction is a barn-burner.  "Behind the Vibration" (Cuneiform Records) is an electric ensemble in so many ways.  Joining Abbasi is Mark Shim (tenor saxophone, MIDI Wind Controller), Ben Stivers (keyboards, organ, Fender Rhodes), and Kenny Grohowski (drums) - this music has the passion of the guitarist's other bands, from the RA Acoustic Quartet to his Invocation Sextet with Vijay Iyer, Rudresh Mahanthappa, Dan Weiss and others. Abbasi plays expansive solos throughout, riffing like a saxophonist or shredding over the impressive drive of Grohowski (his work underneath solos has such a relentless feel) yet he leaves room for Shim's powerful tenor sax and Stivers' battery of keyboards (especially his excellent use of the organ).

Pieces such as "Inner Context" and "And I You" show the range of the quartet. The former opens with guitar and organ playing the two-part melody slowing building until the drums enter, then the tenor sax. Shim joins Abbasi in the melody while Stivers, on organ, plays counterpoint.  They ease into the solos section with Abbasi playing in a restrained yet intense fashion before Stivers (on B-3 organ) plays a strong solo over his bass lines, the rhythm guitar, and the ever-intensifying drums. Shim gets the "out chorus" (the piece fades out on his spot), the most powerful of the solos.  "And I You" features a droning organ, quiet sax, and, under the surface, quiet brush work.  The guitarist gets the opening melody while the long middle section is organ chords over the drums.  But, the piece ends with the melody, filled out by the tenor saxophone playing in unison (with a touch of harmony) landing on a quiet guitar chord.

There are moments when this music is reminiscent of Chick Corea's electric Return to Forever (but, happily, without the occasional bombast).  The Fender Rhodes, the Wind Controller, and effects-laden guitar on "Self-Brewing" are pushed forward by Grohowski's active drums - his powerful work often sounds like Billy Cobham's work with the Mahavishnu Orchestra. Listen to how he responds to Abbasi and Shim as they solo on "Groundswell" and they to him.  He and Shim (on Wind Controller) spar throughout the latter's solo on "New Ritual", then he challenges Stivers as the organist slams into his solo.   The drummer lays back as Abbasi brings the intensity level down at the onset of his solo but the two, pushed by the organ and Wind Controller, are soon picking up the pace.

To my ears, "Behind the Vibration" is warm weather music (although the fiery pieces can certainly heat up a cold winter's night).  The dynamic range of Rez Abbasi & Junction is quite impressive; for such electric music, there are a good number of times when the band deals with the interaction of space and silence.  Best of all, there are well-developed melodies for the band members to build solos  and for the interactions that are at the heart of this music.  Rez Abbasi rarely, if ever, sits still and is always worth listening to.

For more information, go to www.reztone.com.

Here's the Quartet in the studio: 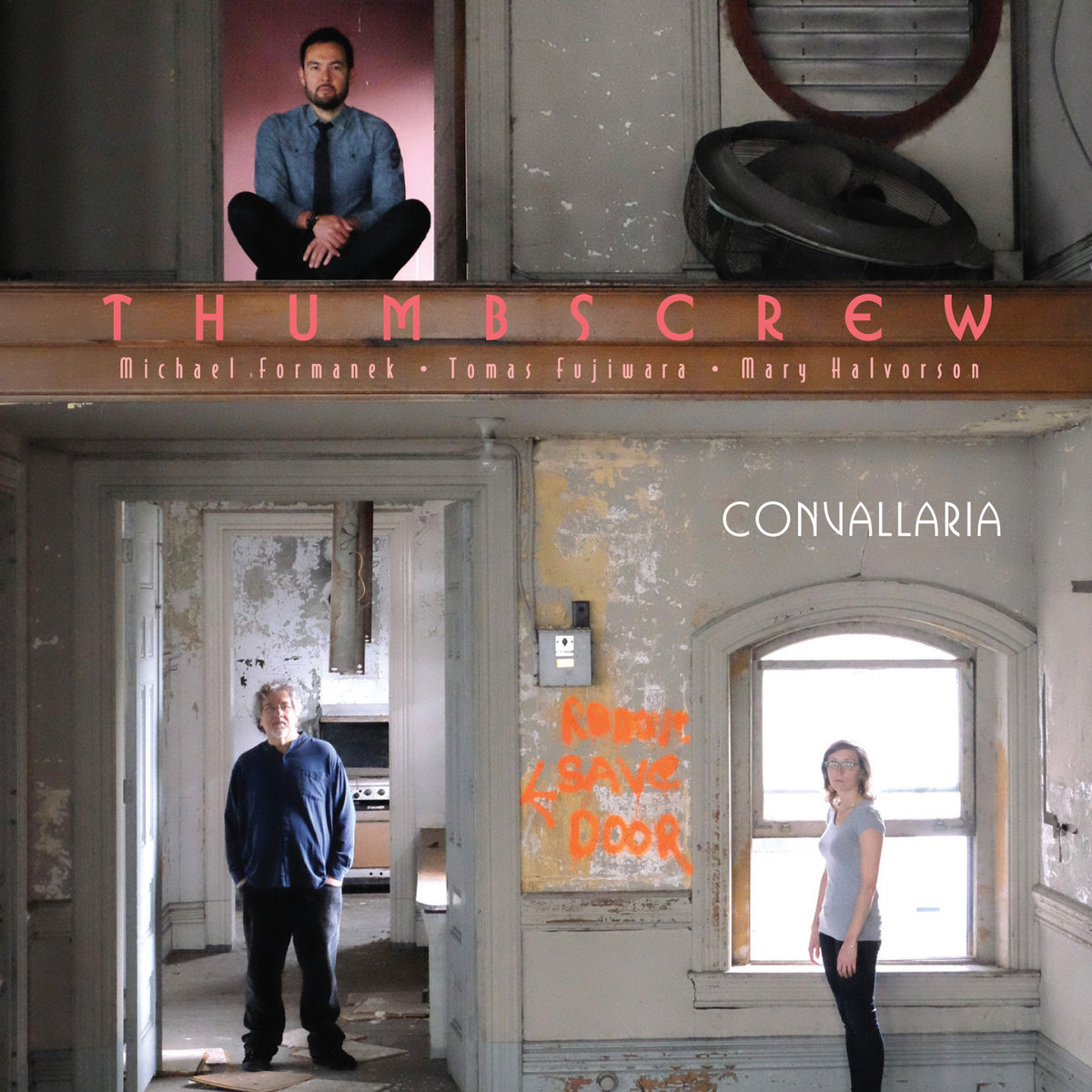 Thumbscrew, the trio of guitarist Mary Halvorson, bassist Michael Formanek, and drummer Tomas Fujiwara, first worked together in 2011 when the bassist subbed in cornetist Taylor Ho Bynum's Sextet.  They hit it off from the beginning, first recording as a cooperative trio in 2013; both Ms. Halvorson and Mr. Fujiwara are now member of Mr. Formanek's Ensemble Kolossus (the 18-piece ensemble's new ECM recording is quite impressive).

The Trio's second CD, "Convallaria" (Cuneiform Records), is the result of a two week residency at City of Asylum, an impressive arts community in Pittsburgh, PA. For three such busy musicians - each leading his or her own ensembles - to have the opportunity to work, compose, improvise, and play together was crucial. In the words of Ms. Halvorson, "It really helped us to take the band to the next level."

The beneficial time spent together is in full evidence on this often-breath-taking collection of songs. With 11 tracks and a generous 73+ minutes of music, the album is impressive in its scope, its variety of sounds and rhythms as well as the intuitive interactions.  For the most part, the trio keeps melody front-and-center - the album opener, "Cleome", which like the title of the session is named for a flower (cleome is best recognized as "spider flower" while convallaria is "lily of the valley"), builds off the power of Fujiwara's conversational drumming, Formanek's thick bass lines, and Ms. Halvorson heady combination of chords and single-note runs.  The guitar solo buzzes as the drummer roils right alongside.  "Convallaria" has quite the bounce in its step with both Ms. Halvorson and the bassist working off Fujiwara's rock-solid drive (he does have fun varying the tempo at times). 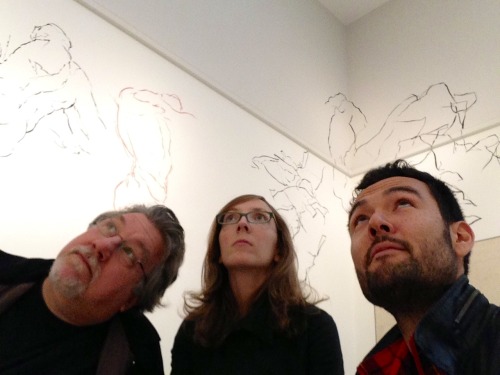 Those of you who know these three musicians as being involved with "free" music may be surprised how music of this music has steady rhythms.  The songs don't swing per se but there are several tracks that absolutely rock out. "Barn Fire Slum Brew" opens with a funky stop-and-start before Formanek and Fujiwara propel the piece forward.  After a subdued opening with the bass and guitar playing a handsome melody (excellent counterpoint from the bass), the trio moves "The Calendar and the Weathervane" in a "metal" direction with a hardy fuzzed-out solo from Ms. Halvorson.  She and the rhythm section stop abruptly and, after a short silence, return to the peaceful tone of the opening section.  The program closes with a medium-tempo ballad, "Inevitable", that includes a guitar solo which moves in and out of "bent" notes and chords while the bass lines move in and around the solo.  Fujiwara illustrates how best to employ brushes with both forcefulness and gentleness.

Thumbscrew makes thoughtful music, songs and sounds that both challenges the listener and rewards him or her.  It is easy to discern the comfort level that Mary Halvorson, Michael Formanek, and Tomas Fujiwara have each other, that they can be "themselves" in a cooperative trio while creating a "group" sound.  "Convallaria" is engrossing music that bears repeated listening.

Here's a live version of the opening track: