The final concert in the Spring 2016 Concert Series at Firehouse 12 in New Haven brings the Jay Rosen Clarinet Madness to the recording studio/performance venue. Rosen, a drummer and composer, has been a vital member of the creative music scene for nearly three decades having worked with artists such as reed master Vinny Golia, trumpeter Paul Smoker, violinist Billy Bang and many others.  He's a member of Trio X, an improvising trio that also features saxophonist and trumpeter Joe McPhee and bassist Dominic Duval.  Their series of albums for the CIMP label are recommended listening.

For this gig, Rosen is joined by long-time associates Perry Robinson and Michael Marcus. Both clarinetists are also veterans of the scene with Robinson (77 years old) first recording in the 1960s and Marcus (63) in the late 1980s.  Both have extensive credentials ranging from intimate duos and trios to big bands.

Trumpeter, composer, and educator Duane Eubanks is the youngest of three brothers, all of whom are making their mark of the contemporary music scene.  Older brothers Kevin and Robin are busy leading their own ensembles; both have been integral members of bands led by bassist Dave Holland as has Duane (Holland's Big Band).  Slowly but sure, Duane has built a career as a bandleader, worked with artists such as the late Mulgrew Miller, Orrin Evans, and drummer Jeff Williams as well as with Alicia Keys, Wu Tang Clan, and Mos Def.  His new Sunnyside release, "DE3: Live at Maxwell's", is an impressive triumph finding him in a trio setting with drummer Eric McPherson and bassist Dezron Douglas, both musicians with solid connections to Hartford, CT (studying at the Jackie McLean Institute at The Hartt School with the bassist also a Hartford native.)

Duane Eubanks brings a Quintet to The Side Door Jazz Club this Friday (6/10) that not only features young Mr. Douglas and Mr. McPherson but also the fine tenor saxophonist Abraham Burton (he, too, studied with Mr. McLean) and pianist Allyn Johnson (an excellent musician from the Washington D.C. area).  This is shaping up to be quite a fine night of music at the Old Lyme venue.

The Door opens at 7:30 p.m. and the band takes the stage at 8:30.  For more information, go to thesidedoorjazz.com.  To learn more about the trumpeter, go to www.duaneeubanks.com.

On Saturday, Jan & Ken welcome back the Eric Wyatt Quartet.  The saxophonist and composer first played in Old Lyme in July 2014 celebrating the release of his Posi-Tone CD, "Borough of Kings."  Mr. Wyatt has been mentored by Sonny Rollins ( a family friend as well as being the great saxophone master) and worked with saxophonist Kenny Garrett, trumpeter Jeremy Pelt, drummer EJ Strickland, and many more.

Joining him will be pianist Benito Gonzalez (who's also featured on the album), bassist Essiet Essiet, and drummer Chris Beck.  Expect the music to be powerful (there's a live performance of John Coltrane's "Pursuance" on Wyatt's website that will tear the speakers off the wall) as well as sensitive and blues-drenched. The man plays with conviction and soul so expect to be moved when the Quartet hits the stage.

For more information and reservations, call 860-434-0886.  To learn more about the saxophonist, go to www.ericwyatt-music.com.

Here's the Quartet (different rhythm section) live at Small's in 2015: 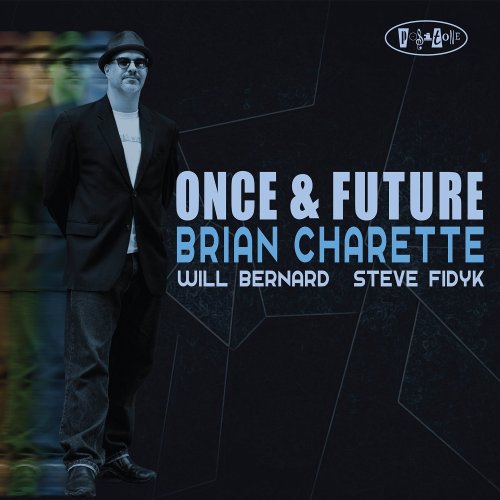 Organist Brian Charette (also quite a fine pianist) has a new album whose concept came during a break at a recording session where he found a copy of his book "101 Hammond B-3 Tips" resting atop the studio's organ. Looking back through the instructional guide where he had written about the "giants of the Hammond Organ", Charette decided his next album would include works by many of this giants as well as nods to the new "Lions" of the instrument.

"Once & Future" is his fourth Trio CD for Posi-Tone and features guitarist Will Bernard and drummer Steve Fidyk.  Out of the 14 tracks, three are originals, one is a standard ("At Last" from the pens of Mack Gordon and Harry Warren), and the rest come from either organists or jazz greats - there's even a mighty funky version of James Brown's "Ain't It Funky Now" which would sound out of place on an album by The Meters.  There's the hard-edged funk of Larry Young's "Tyrone" that he recorded on his debut for Blue Note "Into Something".  A little more of "swing-funk" is heard of "Hot Barbecue" which Jack McDuff recorded in 1965.  Fidyk's cymbal work is pretty impressive as is Bernard's chunky riffs and sparkling solo.  The legendary Jimmy Smith wrote "Mellow Mood" for his collaboration with guitarist Wes Montgomery who contributed "Road Song" to their project.  Charette and company play the tunes back-to-back; the former has a bit of a mysterious sound in the opening that flows throughout the organ solo while the latter is a medium-tempo groove with a pleasant melody and excellent solos from Charette and Bernard (this is his second recording with the organist's trio).

There are a pair of splendid cuts back-to-back in Bud Powell's "Dance of the Infidels" and Woody Shaw's "Zoltan" (as recorded by Larry Young in 1966). Both tracks swing with delight, the former jumping atop the excellent bass lines of Charette while the latter retains the marching band introduction from the original before Fidyk's fine cymbals sets the pace for the organ and guitar.

The leader's three contributions include's the program's closing track, the blues-soaked shuffle "Blues For 96."  The sounds the organist gets from his various drawbar settings changes from track to track as well as during the song.  What stands out is that not only does each song have its own personality but also that Charette, Bernard, and Fidyk never lose their focus or push the proceedings but let each song unfold organically. And, they are having fun.

"Once & Future" is a pleasure to sit down and listen to.  Everyone plays well, the program is smartly chosen, and, with a little digging, you discover organists you have never heard (for instance, Freddie Roach and Leon Spencer).  Hats off to Brian Charette for another fine disk.  Now, see if you can convince producer Marc Free to record your Sextette!

For more information about the CD, go to www.posi-tone.com/1&future/1&future.html. To learn more about the Meriden, CT native, go to www.briancharette.com.

As a reviewer, I get plenty of music to fill my days and nights. But, I grew up in the 1960s, falling in love with the music of The Beatles, The Who and The Rolling Stones but also The Coasters, The Drifters, The Four Tops, Booker T & The MGs, and Otis Redding.  First William Bell song I ever heard was "You Don't Miss Your Water ('Til Your Well Runs Dry)" off of Redding's "Otis Blue" Lp. I sought Mr. Bell's recordings (on Stax Records) and, while he don't have grit and "oomph" of Otis, his smooth voice and articulation stood out from the "Soul Shouters" (closer to Sam Cooke than Wilson Pickett).  He composed a number of good-sized hits including "Born Under a Bad Sign" for Albert King (this version still sends chills up and down my spine) and "Everybody Loves a Winner" for Delaney and Bonnie.

After Stax collapsed in the 1970s, Bell continued writing and recording songs, having hits on both "pop" and "r'n'b" charts. Artists such as Billy Idol, Linda Ronstadt, Rod Stewart, and Etta James recorded his songs Bell has never given up performing and, over the past few years, he has been quite busy with movie appearances, most notably in the documentary "Take Me To The River" where he is heard alongside Snoop Dogg. In 2013, he was part of a large contingent of musicians and vocalists who appeared "In Performance at the White House: Memphis Soul" - click here to watch the entire show.

Now, thanks to Concord Records, Stax is back in business and the label's latest release is "This Is Where I Live" by William Bell.  Produced by John Leventhal (Rosanne Cash), the music is that wondrous mix of gospel, blues, country and soul that Bell has created for nearly 60 years.  Listening to the new album and checking out the recent videos, he's got quite a voice at the age of 77.  It's got a bit more grit which he uses to great effect on the remake of "Born Under a Bad Sign" (snappy new arrangement from the producer).  The ballads, such as "All Your Stories" and "The House Always Win", recall his earlier songs but display the wisdom of maturity. There are cuts that are so funky yet so melodic - "Mississippi - Arkansas Bridge" and "People Want to Go Home" - you just start to tap your foot and, before the songs ends, you're singing along.

If you like classic soul music, never lost your fervor for the sounds of Stax/Volt, and enjoy a well-constructed song with a real story (not just lines that leads to a catchy hook), "This Is Where I Live" will more than satisfy your cravings.  It's such a treat that William Bell is back on the radio, back on record, still writing songs from the soul, filled with that irresistible Memphis beat.  As I write above, plenty of music comes out of my mailbox and into my in-box every month, but I purchased this recording and it is worth 10 times what I paid. Go home to William Bell and, despite all the madness around s every day, the world will feel less frightening.

For more information, go to www.williambell.com.

Here's the artist and the producer talking about the making of the album: