Pianist, composer and journalist Peter Hum, a native of Ottawa, Canada, lives in his hometown and is assistant Editor of Art & Life (meaning he reviews restaurants as well as music) coverage for the Ottawa Citizen (go to jazzblog.ca). Mr. Hum is quite an accomplished musician, having gigged with the likes of guitarist Sonny Greenwich, saxophonist Pat LaBarbera and reed player Phil Nimmons.  He gigged regularly in Montreal during his days at McGill University (the mid-1980s) and has been leading or co-leading groups in Ottawa since the mid-1990s, all the while working full-time as a journalist.  His debut recording as a leader, "A Boy's Journey", was issued in late 2010 (my review is here) and now, nearly 5 years later, is joined by "Alpha Moment" (self-released).  This recording, from sessions in late December 2011), features the same band as the debut - Kenji Omae (tenor saxophone), Nathan Cepelinski (alto and soprano saxophones), Alec Walkington (bass), Ted Warren (drums) - plus guitarist Mike Rud.

And, like the debut CD, the music on the new recording is also filled with impressive melodies, smart interactions between the musicians, and strong solos. I like the cool drive of the rhythm section, how they propel the music forward on tracks such as "Voice From Afar" (with Cepelinski's soaring soprano sax taking centerstage alongside the exploratory tenor sax) and the high energy of "The Good Fight" that opens the album (here as well, Cepelinski - on alto sax - and Omae stand out with fiery solos.) The title track opens with guitarist Rud in a short duet with Hum, playing a melody that sounds influenced by the work of Lyle Mays and Pat Metheny - when the rest of the band enters, the music picks up in intensity and Omae digs into a pleasing solo again followed by the alto saxophonist hot on his heels.  Pay attention to Warren's explosive drumming and how Rud leads the piece out, slowing down the pace, again working with Hum as the saxes reprise the melody.

There's a sweet, gentle, touch to "La Tendresse, s.v.p.", the interactions of Cepelinski (alto sax), Rud and Hum emphasize the fine melody and harmonies.  Bassist Walkington delivers a powerful and melodic solo (at times, with phrases - echoed by the leader in his impressive turn - reminiscent of Henry Mancini's "The Days of Wine and Roses."  "Saddest Day of the Year" closes the program in a quiet, introspective, mood, with the guitar and piano sharing one part of the melody and Omae the other.  As the piece opens up, the guitar and tenor sax move around in a forceful dance that resolves with the entrance of Cepelinski's soprano.  When you listen again, you realize that the composer has given everyone but the drummer the opportunity to play all or part of the melody.

"Alpha Moment" is a generous album, generous in spirit, in melodies, in solos, adult music that flows  ever-forward on the strength of 6 fine musicians.  While Bruce Deachman's cover image captures a roller coaster just as it is about to make a rapid descent, Peter Hum and company never seem out of control (although there are moments on "Bon Vivant" when the band seems to really fly - listen below).  This is joyous music worthy of your attention.

For more information, go to peterhum.com. 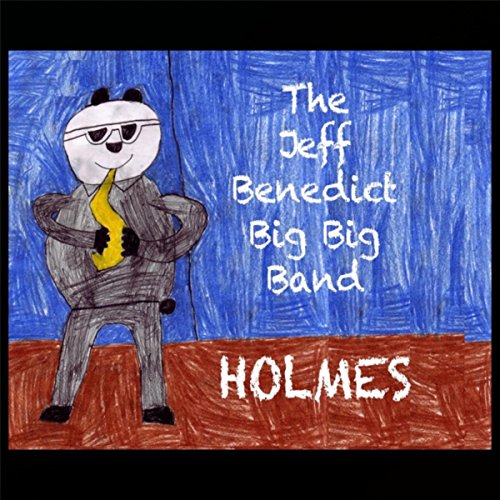 For a reviewer, there are no greater pleasures than when your favorite artists puts out a new recording and it's his/her best or when you hear a recording by a group you never heard before and you are swept off your feet. The latter experience is what I have had listening to "Holmes", the debut CD by the 17-piece Jeff Benedict Big Big Band (Maroon Creek Music/Tapestry. Mr. Benedict is a Professor of Music at California State University in Los Angeles.  He plays soprano and alto saxophones in several different groups including the Dave Askren/Jeff Benedict Quartet as well as other groups in the LA area.  His Big Big Band is a fairly new aggregation yet it's made up of musicians Benedict has known for many years.  From the loud brass exclamation that opens "Come On In", this music hits a groove and rarely lets go.  Powered by the rhythm section of Paul Romaine (drums) and Tim Emmons (bass), this is a group that likes to groove.  The slinky, funky, version of Juan Tizol's "Caravan" romps alongside the rock-infused reading of Pat Metheny's "Jaco" (love the WSQ-like opening of saxes, brass and electric bass).  There's another touch of World Saxophone Quartet in the playful arrangement of Michael Brecker's "Delta City Blues"(Brecker's version has a similar feel with 1 saxophone instead of 5) that, once the rhythm section enters, makes a beeline for New Orleans.  That Crescent City jump also permeates the leader's composition for his father which is the title for the album.  Benedict shares the solo spotlight with baritone saxophonist Charlie Richard, trumpeter Tom Tallman and trombonist Paul McKee.

That's not to say that the band doesn't have a sweet way with a ballad.  The trombone section, led by bass trombonist Gerry Amoury, leads the rest of the band into a bluesy take of "Easy Living."  The body of the piece serves as a dialogue for Benedict's alto sax and the smooth trombone of Paul McKee as well as a fine use of the horns and brass, both as color and to play counterpoint.  "Naima", the John Coltrane classic, is given a Latin treatment and is more up-tempo yet the arrangement emphasizes the melody, first played by the brass then adding the reeds for counterpoint and then switching so the reeds lead for a short while and back again.  There's a strong trumpet solo from Jeff Jarvis over the pulsing rhythm section followed by a energetic turn from guitarist Dave Askren.  Drummer Romaine take a short, understated, solo before the entire band returns to play a short give-and-take with the drummer and then a re-statement of the theme.

"Holmes" is no mystery but a solid effort all around by a 17-piece group of friends (kudos as well to conductor David Caffey).  The Jeff Benedict Big Big Band makes enthusiastic music without resorting to excess high notes, extended solos or swagger - this is a fun album from start to finish.