There was a thread going around Facebook earlier this summer asking about saxophonists who have been inspired by Charles Lloyd.  I could not think of one (although I'm sure they exist) until I heard the new recording by Ochion Jewell.  It's not that he sounds like the man from Memphis, TN, but the musical structures and the influences of both world music and folk/blues in the music of the Kentucky native (he grew up in Appalachia) has, in my ears, has many similarities.

"Volk" (self-released) is young Mr. Jewell's second CD with his Quartet - his debut, "First Suite for Quartet", was issued on David Binney's Mythology label and is quite hard to obtain. The opening track, "At The End of the World", is called by the composer "the overture to the album" setting the stage with its dramatic presentation (hear it below). One hears the influence of Spanish music is the conversation between the members of the Quartet. And, what a responsive band, the same musicians as on the debut including pianist Amino Belyamani (Dawn of Midi), bassist Sam Minaie (Tigran Hamasyan), and drummer Qasim Naqvi (Dawn of Midi, Burnt Sugar The Arkestra Chamber).  The 3 also play together as the Axis Trio. They are a integral part of telling the majority of the 10 stories on the album (Jewell goes it alone on the final track "Black Is The Color of My True Love's Hair").  This music can be extremely powerful, as displayed on in the opening minutes of  "Give Us A Drink of Water" yet the same piece has incredibly quiet passages. And the leader does not even come until after the 4 minute mark of the 11 minute track, then plays a delightfully schizoid solo ranging from bluesy sustained notes to short percussive notes. The tenor solo in the middle of "Radegast" displays an anger, veering into "free" territory yet is followed by one of the prettiest interludes on the album.

Guitarist Lionel Loueke shows up on 2 tracks, the forceful yet subtly exciting "Gnawa Blues" (Gnawa being in West Africa) and the highly rhythmical "The Master" (based on the drumming of the Ewe people of West Africa.)  Loueke's slinky, percussive, sounds meshes well with the Quartet on these tracks - his phrase on the latter track sound much like J.J. Cale in the short melodic mesmerizing phrases. The saxophonist slowly rises out of the piano-guitar interaction joining in the rhythmic lines and quietly adding a phrase here and there but not stepping out.  The song belongs to the rhythm section, Naqvi rampaging drums and Belyamani's throbbing piano.

Minaie's expressive bowed bass introduce the melody of "Shenandoah" then shares it with the tenor. The piano enters, its sweet and plaintive counterpoint supporting the saxophone before playing parts of the melody. Belyamani's sweet solo is variations of the melody line with the quiet cymbals beneath him. When Jewell re-enterts, he also plays abstracts of the melody, some with a touch of swaggers, others with gentle lyricism.  The pianist takes the song out on his own, tenderly reaching the final low chords.

There's beauty, rhythm, energy, melody, counterpoint and splendid interactions throughout "Volk". Ochion Jewell, the composer and arranger, challenges the listener to join in on this journey, to allow the music to seep into one's soul for what is "folk music" but "soul music" in another guise.  The Ochion Jewell Quartet plays this music with great passion, something else they share with Charles Lloyd and his Quartet.  Play this music next to one of Lloyd's post-2000 CDs - the ensembles, with mostly identical instrumentation, do not sound alike but they both play with great joy.

The release date is set for September 29, 2015.  For more information, go to www.ochion.com. 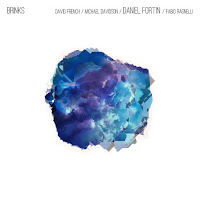 Bassist and composer Daniel Fortin, a native of Peterborough, Ontario, has a new CD - his debut as a leader.  Titled "Brinks" (Fresh Sound New Talent), the 10 original tracks feature the distinctive musical voices of Michael Davidson (vibraphone), David French (tenor saxophone) and Fabio Ragnelli (drums), all (including the leader) deeply involved in the Toronto jazz scene.  They create a program rich in melody, alive with interaction, and smart solos.  The blend of French's clear-toned tenor and Davidson's whirling, full-toned vibraphone creates a handsome atmosphere throughout the program.  Right from the opening moment of the first track, "Verona", one can sense this will be a pleasing journey. French plays the uncomplicated melody while Davidson dances around, Ragnelli creates a pulsating beat and Fortin adds counterpoint (and punch) as he pushes the piece forward.  The saxophonist takes the lead on the following track, "Ends",  while the vibes provide the counterpoint.  But, this music is not as easy to describe as that. The long and involved vibes solo skitters atop the bouncing bass and dancing drums. Fortin's solo is pleasingly melodic and the vibraphone flourishes just divine.

The multi-sectioned "So As To" pulls in the listener, taking one for a fascinating ride while "Smithereen" romps along on Ragnelli's playful yet rock-solid drumming. "Adldmbdld" (now that's a title that alludes spell-check!) moves in the manner of a Gary Burton piece, Fortin's electric bass and Ragnelli's uninhibited drumming propelling the piece forward.  There is a similar excitement in the rhythm on the final track, "But Still and Yet" - the tension between the slow melody line, the high energy of the lines that Davidson is playing, and the propulsive bass and drums is joyous as the sounds spill out of the speakers. Fortin the soloist stands out on the ballad "Flecks" and his interaction with Davidson near the close of the track as the piece speeds up is  infectious

Daniel Fortin, who is one of the three composer/musicians in the cooperative Myriad3, is a strong player who can play percussively along drummer Fabio Ragnelli and then create the most melodic solos. These pieces flow more than swing and several have quite an intensive drive.  A bit of judicious editing (8 songs instead of 10 but which 2 to cut?) might have made "Brinks" a stronger album but it still has much to recommend it.

For more information, go to www.danielfortinthewebsite.com.

Here's a taste to whet your whistle: