Yet another splendid musical weekend at The Side Door Jazz Club in Old Lyme.  On Friday evening, Jan & Ken present the Linda Oh Quartet.  Ms. Oh, a bassist and native of Malaysia who was raised in Perth, Australia, has made her mark on the creative music scene over the past 8 years, working with the Dave Douglas Quintet, the Fabian Almazan Trio and with drummer Terri Lynn Carrington. She has released 3 CDs under her own name, the latest being 2013's "Sun Pictures" on Greenleaf Music.

Joining the bassist/composer in Old Lyme will be her rhythm section mate in the Douglas ensemble, the classy and fiery drummer Rudy Royston plus saxophonist Troy Roberts and the young guitarist Matt Stevens.  Chances are good that they'll play much of the music from the album as well as new pieces.  These are 4 of the finest players around so the music should shine (and, certainly, burn) like the late August sun.

Here's a piece from "Sun Pictures":

On Saturday night, the fine young pianist Victor Gould (a native of Los Angeles, CA) will lead the rhythm section of bassist Ben Williams and drummer (and frequent visitor to the Old Lyme venue) E.J. Strickland.  The pianist and composer has worked and recorded with many fine musicians including trumpeter Wallace Roney (he was in the trumpeter's band when they played The Side Door) and drummer Ralph Peterson, Jr.  He also spent several years working, touring and recording with saxophonist Donald Harrison's Quartet.

This should also be a fun evening of jazz with generous helpings of blues, soul music and strong improvisations.  To make reservations, go to thesidedoorjazz.com.

To find out more and Mr. Gould, go to victorgouldmusic.com.

The Firehouse 12 Fall 2015 Jazz Series begins its 10th year of presenting quality music in a splendid setting, the recording studio/ performance space located at 45 Crown Street in New Haven.  The new season begins on Friday September 18 and runs through Friday December 11.  Along the way, there will several Saturday concerts (including John Zorn's SIMULACRUM on November 14th) and, as always, it's quite a lineup.

As has been the custom, the first show starts at 8:30 p.m. and is followed by a 10 p.m. set (separate admission).
The following week (9/25), Amir ElSaffar's Two Rivers Ensemble returns to the Elm City for its 3rd appearance (the first was in 2008, the second in 2011).  ElSaffar and company are touring in support of his new Pi Recordings CD, "Crisis", a brilliant collection of songs that looks at the trumpeter/ composer's Iraqi roots (he also sings throughout the program). Scheduled to join him onstage will be the impressive band on the disk, including saxophonist Ole Mathieson, bassist Carlo DeRosa (bass), Nasheet Waits (drums and he's quite a force in this band), percussionist and buzuq player Tareq Abboushi, and Zafer Tawil (dumbek, oud, violin). 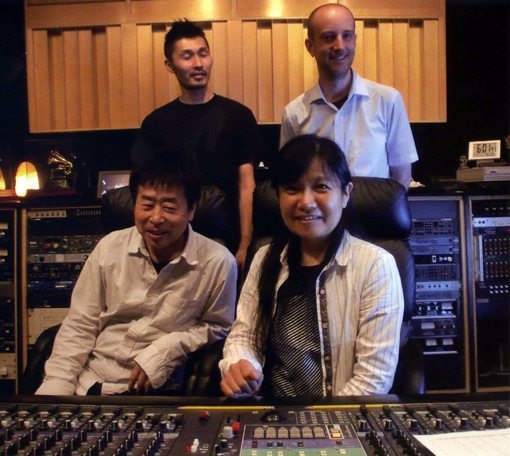 November starts with 2 shows in 1 weekend.  Keyboard artist Andy Milne will be in New Haven on Friday 11/06 with his Dapp Theory while, on the following night, Uncertainty Music Series curator Carl Testa creates fascinating sounds with guitarist Joe Morris as a duo known as Sn. As noted above, SIMULACRUM is the following Saturday (11/14) and it's back to Friday on 11/20 with pianist Satoko Fujii's Tobira (pictured left), a quartet featuring Ms Fujii's husband Natsuki Tamura (trumpet) and drummers Takashi Itani and Reggie Nicholson.

There's no show on Thanksgiving weekend so it's off to December for the final 2 shows in the series.  The penultimate Friday is 12/04 and features trumpeter Peter Evans, drummer Kassa Overall and bassist John Hébert, an ensemble that goes by the name of the Zebulon Trio. On 12/11, the final performance belongs to Ned Rothenberg Inner Diaspora, a quintet led by the saxophonist/flutist and featuring Jerome Harris (acoustic bass guitar), Mark Feldman (violin), Erik Friedlander (cello) and the talented percussionist Satoshi Takeishi.