For some reason, every year during the Jewish High Holidays, Firehouse 12, 45 Crown Street in New Haven, books an act that I really want to see but I'm committed to singing in our choir and attending services.  Don't feel bad - I made the choice. If your religion does not trump your love for creative music, head on down to the Elm City on Friday October 3 to catch the Michael Musillami Trio + Kris Davis.  Ms. Davis (pictured above left) is quickly maturing into one of the finest contemporary pianists; one can hear stretch boundaries with Tyshawn Sorey and Ingrid Laubrock in Paradoxical Frog or leading her own trio.

When you add her singular voice to Mr. Musillami (guitar), Joe Fonda (bass) and the "hat-man" George Schuller (drums, percussion), creative sparks fly.  She's on the Trio new recording "Pride" (Playscape Recordings), adding great depth to the first CD of the 2 in the set.

The Side Door Jazz Club continues its tradition of presenting fine young pianists in their lively and initiate performance space in Old Lyme, CT.  This Friday, Cuban-born Harold López-Nussa brings his artistry and great knowledge of Afro-Cuban and classical music to the venue.  The 31-year old López-Nussa has traveled the world with artists such as Horacio "El Negro" Hernandez, trumpeter Christian Scott and vocalist Omara Portuondo's band. With Scott, Harris and saxophonist David Sanchez, he's recorded original as part of the 90 Miles project/band.

He'll bring his trio - Jorge "Sawa" Perez (bass) and the pianist's brother Ruy Adrián López-Nussa (drums) - and they'll play 2 sets.  Doors open at 7:30 p.m. and the music starts at 8:30.  For more information, call 860-434-0886 or go to thesidedoorjazz.com. To find out more about this fine young musician, go to www.haroldlopeznussa.com. 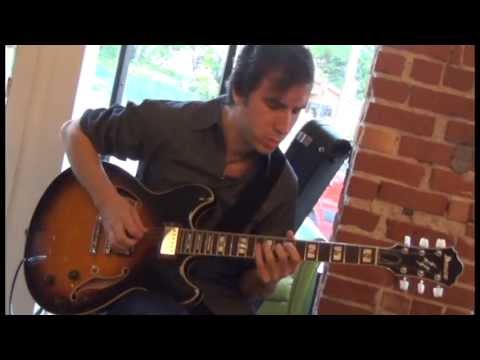 On Saturday evening at 8 p.m., The Buttonwood Tree, 605 Main Street in Middletown, presents a solo concert featuring guitarist Sinan Bakir.  The Turkish-born musician has lived in the Hartford-area for the better part of the past decade playing with numerous local musicians such as Middletown native Mike Augeri (drums), pianist Warren Byrd and bassist Matt Dwonsczyk.  For this concert, however, the guitarist/composer goes alone with his electric guitar.  That is, perhaps, the best to discover what a fine musician he is and how important melody is in his work.  For more information, go to www.buttonwood.org.

It's been 7 years since trumpeter David Weiss created The Cookers, the septet that has introduced musicians such as Billy Harper (tenor saxophone, 71 years old) and Dr. Eddie Henderson (trumpet, 75 years old) to a new generation of listeners.  Those 2 musicians first came to critical attention in the early 1970s along with pianist George Cables (who turns 70 in November), bassist Cecil McBee (79 years old, who actually was part of Charles Lloyd's Quartet from 1966-67) and drummer Billy Hart (73).   Mr. Weiss (who turns 50 on October 21) and alto saxophonist Donald Harrison (54 - he has replaced 52-year old Craig Handy) are the "young" veterans of the group.  "Time and Time Again" is the band's 4th CD and 2nd for Motema Music.  The leader, who was raised on the music of the late 1960s and early 70s, especially the black creative music inspired by the Miles Davis Classic 1960s Quintet, plus the Blue Note recordings of Freddie Hubbard and pianists Herbie Hancock and Andrew Hill, really wanted to create a band that could channel the vitality and the creativity he heard from his influences.

And, do they ever "cook!"  Mr. Hart, who has never been busier as a musician, teacher and mentor, is the driving force, playing louder and harder than he does in his own fine Quartet.  Mr. McBee may be the elder statesman but plays with great exuberance while Mr. Cables channels the muscular style of McCoy Tynee while retaining his more melodic style.  His composition, "Farewell Mulgrew", pays tribute to this recently passed colleague, pianist Mulgrew Miller, showing a bluesier of the band.    Mr. Harper, who strikes me as the heart and soul of the Septet, contributes 3 pieces to the 9-track program including the rousing opener, "Sir Galahad" and equally closer "Dance Eternal Spirits Dance." He still plays with great power and ferocity, his solos maintaining a link to the manner in John Coltrane approached his solos - go all out and don't settle for cliches.  Dr. Henderson, who practice medicine pet-time in the 1970s and 80s before choosing music as his vocation, has a articulate style, more influenced by Clifford Brown and Booker Little.  His understated solos on tracks such as the drummer's "Reneda" and bassist's "Slippin' and Slidin'" shows a bluesier side.

One of the true pleasures of this CD is listening to Billy Hart's work underneath the solos.  He often leaves the "time" keeping to the piano and bass, playing counterpoint to the soloist.  You hear this throughout, from "Sir Galahad" on, the drummer pushing, prodding, thumping, not allowing the music to sit still.  Most notably, he lights a fire under Donald Harrison who has not sounded this "post-bop" in years.  The alto saxophonist burns brightly on pieces such as the bassist's "Dance of the Invisible Nymph" and Mr Cable's fiery "Double or Nothing."  Mr. Hart matches his intensity each time out, and also really pushing the leader on the latter track.

The Cookers rarely play ballads - the closest on "Time and Time Again" is "Farewell, Mulgrew" - yet their energetic style is contagious, not enervating. This is an ensemble that deserves to be seen and heard live.  The recordings actually do their "sound" justice so play it loud and hang on to the wine glasses.  For more information, go to motema.com/artists/the-cookers/.
Posted by Richard B. Kamins at 5:23 PM