There has been a whirlwind of activity online in honor of Kenny Wheeler since his passing this past Thursday (9/18) and deservedly so.  The Canadian-born Wheeler, who played trumpet and flugelhorn, had lived on London for over 6 decades and it was there where he first came to critical notice in the late 1980s.  His carer really took off after signing to ECM Records and releasing "Gnu High" in 1975, a 3-song Lp that featured Keith Jarrett (according to the record company, the last time he played as a sideman), Dave Holland (whose group he played with for several years), and Jack DeJohnette.  The album received much critical praise and Wheeler went on to record 8 more CDs as a leader (with his last session - recorded in December of 2013 - set to be issued in 2015.) 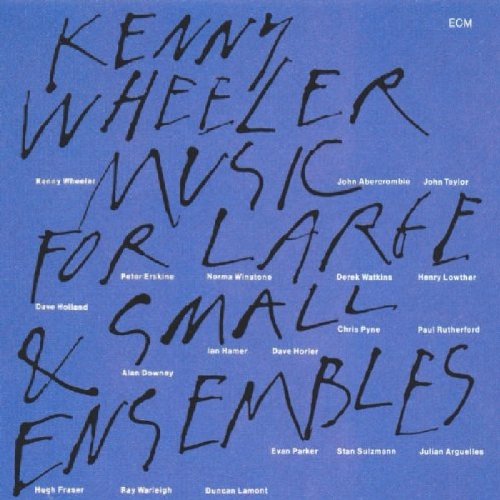 Although he recorded many albums with small ensembles, I'm partial to his large band recordings.  Pictured left is his 1990 ECM "Music for Large and Small Ensembles", a 2-CD set that has as its rhythm section the composer's Quintet that included Holland, drummer Peter Erskine, pianist John Taylor and guitarist John Abercrombie.  Wheeler's compositions (which he often called "sad songs") and arrangements are quite lovely, showing classical and jazz influences.  His writing for Norma Winstone's voice (they worked together with Taylor in the grow Azimuth) is so good, her haunting wordless vocals blending in with the reeds or soaring over the brass.

Just 2 years later, Ah Um Records (a label based in Great Britain) released another large ensemble recording "Kayak", scored for 10 musicians (as opposed to 19 for the ECM).  It's a great ensemble, all British save for Erskine and really tough to find but well worth the search.

Kenny Wheeler was also quite a soloist on both his horns, a surprising who often leapt into the higher register of his instrument as a spark was running throughout his body.  A gracious leader, he rarely hogged the spotlight, preferring to let others lead the way.  On the 1996 ECM release, "Angel Song", Wheeler does not solo on the opening track "Nicolette" until both Holland and saxophonist Lee Konitz have had their respective time in the spotlight. That particular recording also featured guitarist Bill Frisell, the perfect mate for Holland in the drummer-less session plus a great match for the "open" quality of Wheeler's compositions.

Kenny Wheeler may have passed but his music will resonate for many years. His well-constructed melodies, many with long lines, and his splendid arrangements should, like the work of Bob Brookmeyer and Gil Evans, inspire musicians to never settle for the tried-and-true but to always to attempt to venture into unknown territories.

Ottawa Citizen scribe Peter Hum has collected a number of tribute in his latest blog post - click on the link below, read it and then go listen to Kenny Wheeler's music with open ears.

ottawacitizen.com/entertainment/music/jazzblog/remembering-kenny-wheeler-plus-news-of-an-ecm-swan-song.
Posted by Richard B. Kamins at 5:15 PM