Vocalist and composer Somi , born in Illinois, is the child of parents who hail from Uganda and Rwanda; she considers herself "an East African girl." She has released 4 CDs, the first (now out-of-print) in 2003 and then one each on World Village (2007), ObliqSound (2009) and her live recording on Palmetto (2011).

Her list of accomplishments is long and varied, from being at TEDFellow, a Park Avenue Armory Artist-in-Residence, and performing at the United Nations in commemoration of the International Day of Remembrance of the Victims of Slavery and the Transatlantic Slave Trade. 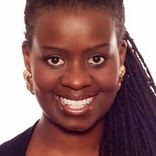 In 2011, Somi moved from New York City to the port city of Lagos, Nigeria, currently the 7th largest city in the world. She spent 18 months there, soaking in the culture, trying to make sense of the political scene there but ask throwing herself into producing concerts and intimate salon shows, closing her stay as an Artist-in-Residence at a University in Ilorin, Nigeria, 160+ miles northeast of Lagos.

Most of all, her music began to change.  She still wrote lyrics concerned with the plight of poor people but also shifted her focus to how women are treated in the Third World to pollution that chokes rivers and water supplies.  With help of her top-notch band - Liberty Ellman (guitars), Toru Dodo (piano, keyboards), Michael Olatuja (bass) and Otis Brown III (drums) - plus producers Cobhams Asuquo (Nigeria) and Keith Witty (New York City, who played bass on her live CD) and a slew of guests, Somi has created "The Lagos Music Salon", her debut for the Okeh label.  As impressive as her previous recordings are, this CD is a giant step forward.  Not only does the music serve as a travelogue for her journeys in Nigeria (the opening track uses the soundtrack of her moving through customs in Lagos), it also is a brilliant meld of traditional and modern rhythms.  Think Fela Kuti meets Robert Glasper and you begin to touch the surface.  Ellman who works alongside Henry Threadgill and Steve Lehman, plays splendidly throughout, from his "clicking"rhythm guitar on "Lady Revisited" to his strong acoustic guitar on "Four African Women."  Michael Olatuja's throbbing bass lines drive the music, making songs such as "Four.One.Nine" (a harrowing tale of a women who sings "You will have to break my arm before you break my heart" to her philandering lover) and "Two-Dollar Day" (a woman looking for any kind of work after the death of her husband) feel like dance pieces (even as the words make you wince or feel sorrow.) He, also, has a powerful solo on "Still Your Girl."   Toru Dodo, who has been with Somi since her 2007 release, is a wonderful accompanist; his support on "Ankara Sundays" complements not only her vocal but also Ellman's guitar lines while his ringing chords and single-note runs on "Last Song" are calming as the percussion pushes the music higher. He may also be responsible for the fine string quartet on 4 of the tracks. The playing of Otis Brown III (Gretchen Parlato, Joe Lovano's Us 5) is exceptional, whether he is blending his jazz/r'nb chops with the other percussion or locking in with Olatuja's funky bass on "Four African Women" - never disruptive, always in good taste, he skillfully frames the vocals and solos.

But, make no mistake, this is Somi's show.  She had a hand in composing each song, providing the powerful lyrics.  And, her voice is stunning, with a big range.  But, it's just that she can hit many notes but there is great emotional depth, ranging from pure joy to righteous anger to mature love.  There's no fear, no taking the easy way (the producers surely had a hand in that), no extraneous sounds just to fill up the spectrum - even the string arrangements have power and presence.

At 70 minutes, "The Lagos Music Salon" is a powerful musical statement.  The energy and the vision never flags, the musicianship is imposing and the sound quality quite impressive.  Don't ignore Somi and her music - she has many things to tell you about the condition of the world and does so without preaching or cursing but with love and humility.   For more information, go to www.somimusic.com.

Since emerging on the Canadian music scene in 2006, the Montreal-based Elizabeth Shepherd has been creating music that skirts the territory between jazz, down-tempo, and r'n'b. While she has no fear of re-arranging standards (her 2012 release, "Rewind", featured pieces like "Prelude To a Kiss", "Sack of Woe" and "Love For Sale"), she is also an impressive composer.  The rhythm section of her 5th CD, "The Signal" (self-released/Linus Productions) includes bassist Scott Kemp (5 of the 10 tracks) and drummer Colin Kingsmore (5 tracks), both of whom have played on her previous 4 recordings.  She also utilizes bassist Ross MacIntyre (5 tracks), drummer/percussionist Roman Tomé (2 tracks), drummer Larnell Lewis (2 tracks), and drummer Joshua Van Tassel (1 track). Lionel Loueke shows up on the opening track "Willow" playing guitar and adding backing vocals, backing vocals on "Another Day", and percussive guitar on "This." . Ms. Shepherd shares the lead vocals on the title track with Alex Samaras, a member of saxophonist Angela Morris's "Rallidae" (my review here).  The impressive Toronto-based trumpeter Kevin Turcotte is featured on 2 tracks, blasting his way through the synthesizer fog and propulsive drumming of Kingsmore on "Lion's Den" and serving as a trumpet choir, funky soloist  and the last sounds you hear on "Baby's Steps", the final track of the CD.

Ms. Shepherd wrote all the songs, produced or co-produced the album, played Rhodes, acoustic piano, MOOG and sang 95% of the vocals.  Several of the songs have samples; the voice of Mother Teresa rises out of the drums on "I Gave", CBC radio host Laurie Brown sets the story of the title track with a tale of synchronicity, and Leadbelly leads off "B.T. Cotton" by introducing a traditional slave song ("jump down, spin around, pick a bale of cotton").  That last track is a sweet, bluesy, funky piece reminiscent of the sound of Gretchen Parlato - the use of the Steel pans, played by Toronto-based, Trinidad born, Mark Mosca, comes out of the blue and is a pleasing addition to the song.  Another sample, this time a news report from Los Angeles describing a  police action  (the announcer mentions "racial profiling", serves as the stepping off point for "Another Day," The lyrics take an abstract view of peoples' actions, leaving the listener with some hope as does the fade on the voices of playing children.

One can  hear the influence of Robert Glasper's funk-drenched jazz in the excellent Rhodes work of Ms Shepherd.  Her experimentation brings to mind the work of Peter Gabriel on "So", "Us", and "Up"  with many of the songs featuring her voice multi-tracked. For example, the mix of Larnell Lewis's hard-driving drums, the percussive Rhodes and the numerous voices works to great effect on "On Our Way." Also, like Gabriel, it takes the listener several listens to catch the words.

"The Signal" resembles Elizabeth Shepherd's 2010 CD "Heavy Falls The Night", especially in the multi-tracked voices and liberal use of Rhodes.  The earlier album has more of an up-tempo feel and a brighter sound while the new one is darker, the sounds a bit murkier or distant but no less attractive.  Up until this new CD arrived in the mail on Monday, I had never heard Elizabeth Shepherd.  I have a lot of catching up to do and I know it's going to be a lot of fun.  For more information, go to elizabethshepherd.com/home/.

The new CD is not released until September 30 so here's a funky take of Cole Porter's "Love For Sale" from Ms. Shepherd's 2012 CD "Rewind":