School is in, the football season has begun there are a slew of new recordings set to be released in the next 6 weeks but, for those of us who live in Connecticut, we know that the seasons are changing when the Fall Concert Series commences at Firehouse 12, 45 Crown Street in New Haven, and the "Improvisations" series, curated by Stephen Haynes and Joe Morris, begins anew at Real Art Ways, 56 Arbor Street in Hartford.

On Friday September 13, the Firehouse welcomes Gerald Cleaver & Black Host, a quintet of world-class musicians playing wonderfully "unclassifiable" music.  Is it jazz, electronic, rock, "free", or noise?  Yes, that and more.  The drummer/composer will bring the band that recorded "Life in the Sugar Candle Mines" released earlier this summer on Northern Spy Records.  They include Cooper-Moore (acoustic piano, synthesizer, diddley-bo), Darius Jones (alto saxophone), Brandon Seabrook (electric guitar) and Pascal Niggenkemper (acoustic bass) - the sounds they make as a unit hearken back to the "free jazz" movement of the 1960s but also one can hear Tony Williams' Lifetime and others but updated to include moments of melody and drama.  Seabrook thrashes, squeals, roars and more on his guitar while Jones is a forceful alto player, reminding this listener of Oliver Lake and Tim Berne.  Cooper-Moore can be forceful and gentle, offering the occasional calm comments as well as blues piano amidst the noise.

Black Host plays 2 sets - 8:30 and 10 p.m. - for more information, go to firehouse12.com and, to check out the band, go to northernspyrecords.com/artist/black-host/. The picture of Black Host above was snapped by Juan Carlos Hernandez. 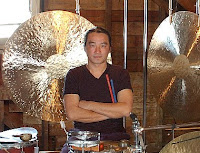 On Sunday September 15, the Improvisations series finds Messrs. Haynes (cornet, trumpet) and Morris (guitar, bass) working with percussionist/drummer Tatsuya Nakatani in the performance space at Real Art Ways. Nakatani (pictured left), born in Osaka, Japan, has lived, worked and created in the United States since the mid-1990s - he has worked as a solo artist, has accompanied dancers, and gives master classes all over the world.

If you know anything about this series, it's that the music is created spontaneously, meaning there has to be great rapport and trust among the musicians.  The musicians take many chances throughout the performance and that can be challenging for the audience. One will be rewarded with impressive interactions and honest music, music from the heart, mind and soul.  For more information, go to www.realartways.org.

On Tuesday September 10, Pi Recordings will release "Holding It Down: The Veterans' Dream Project", an amazing recording with poetry and music that looks at life after war for veterans of the conflicts in Iraq and Afghanistan.  Pianist/composer Vijay Iyer and poet/performer/librettist Mike Ladd spent 3 years organizing this project. Ladd interviewed many veterans and heard about combat issues, about the dreams that continue to haunt long after their service  has ended, and about re-entry into "real" life.  With Ladd joined by veterans/poets Maurice DeCaul and Lynn Hill on vocals, Iyer creates a supporting soundtrack that lends support and substance to the words.  Providing the music is Liberty Ellman (guitars), Okkyung Lee (cello), Kaasa Overall (drums), and Guillermo E. Brown (drums).

In keeping with the spirit of Iyer and Ladd's previous 2 collaborations, "In What Language" (Pi, 2003) and "Still Life With Commentator" ( Savoy, 2007), the music is a blend of numerous styles that is often as striking as the poetry it illustrates.  Needless, the power in this project should be seen and heard in concert - the original commission came from Harlem Stage in New York City where it premiered in September 2012 - but the recording is a document that will hold your attention from beginning to end and long afterwards.  One often wonders if music makes a difference in this day - "Holding It Down" can and should make you want to do more than just shake your head and walk away.  For more information about this project, go to www.pirecordings.com/album/pi49. Also, you can get a feel for the project by going to www.youtube.com/watch?v=Z5jahYf92-U.

If you want to learn more about what is being done for military personnel, here are websites you can access:
www.oefoif.va.gov/,