Look! It's October, the leaves are changing and falling and the Improvisations series at Real Art Ways, 45 Arbor Street in Hartford, rolls on. On Wednesday October 2, series curators Stephen Haynes (cornet, trumpets) and Joe Morris (guitar, bass) are joined by Ken Vandermark (saxophones) and Nate Wooley (trumpet) for an evening of music that promises to be as exciting as it will be expansive.  Mr. Vandermark has been on the forefront of the international scene since his days in Boston in the 1980s (he was a member of one of Joe Morris's groups.)  His move to Chicago in 1989 and his work with the great saxophonist Hal Russell's NRG Ensemble led him to form a number of ensembles, including the high-energy Vandermark 5 and his cooperative group with drummer Hamid Drake and bassist Kent Kessler called DKV. Trumpeter Wooley has worked with John Zorn, Professor Anthony Braxton and guitarist Mary Halvorson plus leads his ensembles - he, too, has worked and recorded with Joe Morris.

Ken Vandermark and Nate Wooley open the evening of music in a duo at 7 p.m. and then will be joined by Messrs. Haynes and Morris for the second set. For more information, go to www.realartways.org or call 860-232-1006. 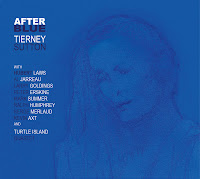 On Friday October 4, vocalist Tierney Sutton returns to Connecticut (she attended and graduated from Wesleyan University) with her top-notch ensemble to headline "A Music for Humanity Concert", an event to benefit Interval House, a shelter for women and children in Hartford. Ms. Sutton and band - pianist Christian Jacob, drummer Ray Brinker plus bassists Kevin Axt and Trey Henry - are beginning a tour to celebrate the release of "After Blue" (BFM Music).  The CD is dedicated to the music of Joni Mitchell (who celebrates her 70th birthday in November) and actually only features one member of her band, bassist Axt, who plays on only one track.  Flutist Hubert Laws and drummer Peter Erskine are featured on 2 tracks as is the Turtle Island String Quartet. Turtle Island founding member, cellist Mark Summer, supports Ms. Sutton on a pair of tracks as well.  The biggest contributor to the musical sound is Larry Goldings, who plays piano and Hammond B-3 organ on 5 tracks. Veteran LA session man Ralph Humphries is the sole/soul support on the finger-snapping version of "Big Yellow Taxi." Perhaps the most impressive track is Ms. Sutton's impassioned reading of "Woodstock", joined only by Goldings on piano - her vocal is emotionally rich and quite touching.  French guitarist Serge Merlaud appears on the 2 standards, "Don't Go to Strangers" and "Answer Me, My Love." 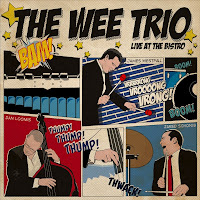 The only thing "wee" about "The Wee Trio: Live at The Bistro" (Bionic Records) is in the name of the group. Otherwise, James Westfall (vibraphone), Dan Loomis (acoustic bass), and Jared Schonig (drums) swing their collective butts off on this, their 4th CD.  Recorded at the Trio's favorite club, Jazz at the Bistro in St. Louis, Missouri, this music rocks most of the time, from the opening notes of Ray Noble's classic "Cherokee" to the high-energy finale, Schonig's "White Out." More than anything, this is dance music, albeit often with a modern edge.  There are moments that hearken back to the sound (and dance feeling) of Lionel Hampton's early "swing" recordings. Yet, The Wee Trio is nothing if not a collective, meaning all 3 contribute original material to the program and there are plenty of solos for all involved.  Drummer Schonig not only composed 3 of the tracks he is also the only member of the group to get 2 "..Intros."  Throughout the program, the group's interactions are quite impressive, whether it's the manner in which the rhythm section pushes beneath the vibes on Westfall's "New Earth" or their funky yet hard-as-nails rearrangement of David Bowie's "Queen Bitch." Loomis's handsome, rapid-fire, filled with harmonics, lead-in to Isham Jones' "There Is No Greater Love"sets the table for a pleasing re-invention of the tune first recorded in 1936.  Westfall's "Space Jugglers" is a hardy dance tune with a strong melody, forceful bass and drums, and a forward motion that stops several times to catch its breath before getting back up to speed.  The music is irrepressible and irresistible.

As impressive as The Wee Trio's first 3 CDs are, "Live at The Bistro" really displays their strengths in the best light.  This is a group one needs to see and hear in person.  Find this recording then go find the band - you will not regret one minute! For more information, go to www.theweetrio.com.
Posted by Richard B. Kamins at 10:57 PM