Surprises Can Be Good

One of the fun things about reviewing new music (there are many "fun" things) is when you discover someone new, only to discover he's been "on the scene" (albeit a bit underground) for nearly a decade.  Daniel Bennett, who plays a slew of reed instruments, graduated from the New England Conservatory of Music in 2004 and released the first Daniel Bennett Group CD in 2008.  At that time, the DBG was a drum-less trio of saxophone, guitar and drums playing the leader's idiosyncratic pieces that blend folk, pop, and jazz elements.

In 2013, Bennett is releasing "Clockhead Goes To Camp" (Manhattan Daylight Media Group) - his Group now includes Mark Cocheo (guitars), Peter Brendler (bass) and Tyson Stubelek (drums).  The music is a playful blend of pop, folk, classical, jazz and world music influences with the emphasis on melody, groove, short solos, all of which combine to grab the listener by the ears as if to say "Wake Up!"  The album and song titles may lead one to believe they have stepped into a children's fantasy world.  Yet, songs like the opener, "The Old Muskrat Welcomes Us" with its groove out of the early 1960s (dig those handclaps) and the next track, "An Elephant Buys a New Car", with its circular melody and throbbing drums (not to forget the out-of-control pennywhistle plus more handclaps) are endearing.  By the 3rd track, the amiable "Nine Piglets", you realize Bennett loves to create melodies that stick in your brain - also, when you go back to listen, you can hear how the Group members pay attention to each other.  This music defies one's expectations. The album's closing track is just Cocheo's electric guitar (with loops, perhaps overdubs) playing a wistful ballad.

Bennett's classically-influenced melody atop the fiery drums of Stubelek powers the title track yet, even during Cocheo's short solo, the music never loses its way. Bennett's tone on both alto saxophone and flute is impressive. The fullness of his flute sound on "Whatever It Might Be" suggests Hubert Laws while I hear a bit of Paul Desmond and Ornette Coleman (in the lightness of tone and his melodic approach plus Mr. Coleman also displays a playful approach in his playing.) There is one solo saxophone track, "Sandpaper Is Necessary", and one conjures up Lee Konitz.  "Whatever..." also includes spoken word poet Rimas Uzgiris, whose manipulated vocal comes out of nowhere but makes perfect sense.

Really, the best way to enjoy "Clockhead Goes To Camp" is close your eyes, get in the groove, and play the CD from beginning to end.  The program is not very long (about 43 minute) so you can play it twice.   Earthshattering?  No.  Fun? Absolutely!  From the opening moment until the guitar fades aways at the end, the Daniel Bennett Group creates an entertaining soundtrack guaranteed to coax a few smiles.  Maybe you will even clap along or even get up and dance.  For more information, go to www.danielbennettgroup.com. 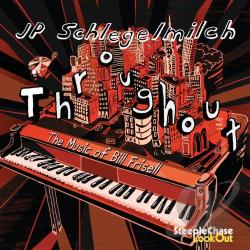 When last we came across pianist JP Schlegelmilch, it was 8 months ago on the debut recording of Old Time Musketry (my review is here.)  That delightful CD is an intelligent blend of styles, blending genres easily and does so in a playful mood as well.

"Throughout: The Music of Bill Frisell" (SteepleChase/LookOut) is a clever conceit, arranging 10 of the guitarist's for solo piano.  Several things stand out on the first listen - the man has written some excellent pieces and Schlegelmilch is one fine pianist.  Over the course of the 40-minute program, one should notice the sophisticated "ragtime" rhythms on "Rag", the Chopin-esque beauty of the title track, and the broad brush of Charles Ives on "Hangdog."There are moments that could come from a Randy Newman song ("Monica Jane" and "Deep Dead Blue") as well as the motor-rhythm drive of "Jimmy Carter (Part 2)" under a melody that reflects Aaron Copland and Brad Mehldau.

Once you get over looking for the influences, sit back and enjoy this program.  The performances are concise (only 1 track lasts more than 5 minutes) but do not lack for fine musicianship, melodic development and harmonic development.  Schlegelmilch, who studied with Fred Hersch, Ralph Alessi and classical teacher Sophia Rosoff (among others) does not waste notes or riff endlessly through these songs.  What he does do is make these melodies stand out in a way that shows their sophistication and, often, their beauty.  For more information, go to jpschlegelmilch.com.
Posted by Richard B. Kamins at 5:53 PM