The trees are in bloom, the dandelions in full glory and The Firehouse 12 Spring Concert Series rolls on into its 9th week. This Friday (May 10), The Jeremy Pelt Show comes to the Elm City performance space, located at 45 Crown Street.  Pelt, whose new HighNote CD "Water and Earth" is his 11th as a leader since his debut in 2002, is not only a busy musician and producer but also a Senior Artist Teacher at the Hartt Scool of Music/University of Hartford.  He's also a fine musician with a tone and attack reminiscent of Clifford Brown and Freddie Hubbard.

The "Show" is Pelt's "electric" unit and features his long-time friend Frank LoCrasto (keyboards), Roxy Coss (saxophones), Richie Goods (bass) and Dana Hawkins (drums).  The music they play has a funkier, more experimental, edge than the trumpeter's high-energy acoustic Quintet but is just as melodic and forceful.

Trumpeter/composer Jonathan Finlayson, a native of Berkeley, California, should be a familiar name to aficionados of Black American Music.  He's worked quite closely with Steve Coleman & Five Elements for over a decade, recorded and toured with guitarist Mary Halvorson as well as saxophonist Steve Lehman.  His bright tone and rhythmic attack blends the articulation of Clifford Brown with the inventive vision of Lester Bowie.  Amazingly, "Moment & The Message" (Pi Recordings) is Finlayson's debut as a leader and features his quintet known as Sicilian Defense, a tight-knit ensemble with David Virelles (piano), Miles Okazaki (electric and acoustic guitars), Keith Witty (bass) and the inventive drummer Damion Reid.  It should come as no surprise that this music, all original pieces, is informed by the trumpeter's long association with Steve Coleman. One can also hear a touch of Henry Threadgill in several of the pieces.

What you should focus on are the fascinating compositions with their intricate interplay; many of the pieces build off the propulsive forward motion of Reid (who also has worked with Lehman).  The opening track, "Circus", dances out of the gate atop the funky guitar, the bouncing bass lines, rhythmic piano chords and the drummer's ferocious drive.  Halfway through the nearly 8-minute cut, the band stops dead as if the song was over.  Instead, the ensemble shifts gears, slowing down yet still moving forward on the bowed bass lines and declamatory drumming. "Lo Haze" follows and it, too, has several distinct sections.  Both Virelles and Okazaki play rhythm beneath the fine trumpet and they supply their own smart support.  All the while, Reid dances away as Witty plays the foundational role.  "Fives and Pennies" has a dark opening, led by the tinkling piano and Okazaki's quiet guitar chords. Then, as the drummer falls into a solid beat, Virelles begins to play tolling chords which supplies the piece a great amount of tension.  The music picks up in intensity and then slowly cools down - the trumpeter is in front almost the entire 12:40 yet the music is always engaging. The shortest track (4:14), "Tyre", displays more of Okazaki's intelligent rhythm work and also has a short but sweet piano romp.

One coud easily cite each track for its exceptional musicianship, for the exquisite arrangements, and attractive melodies.  Jonathan Finlayson's debut recording displays this 30 year-old trumpeter/composer as a mature musician, more than ready to lead an ensemble through a program that draws one in and holds one's attention all the way through.  "Moment & The Message" is an apt title - this is definitely Finlayson's "moment" and "the message" is music that challenges one's expectations without anger but with creativity and vitality.  For more information, go to pirecordings.com/album/pi48.  The trumpeter's website - jonathanfinlayson.com -  is as sparse as his music is forceful but check it out anyway. 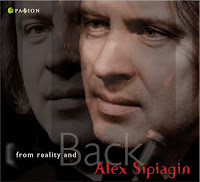 I lose count of the many recordings that are graced by the presence of trumpeter Alex Sipiagin. Over the past decade, he's released 10 as a leader on Criss Cross (not to forget 2 recordings with OPUS 5) plus several more on other labels.  As a sideman, he's worked and recorded with Conrad Herwig, Dave Holland, the Mingus Big Band/Dynasty/Orchestra and many others.  His new CD, "From Reality and Back" appears on Gonzalo Rubalcaba's 5 Passion label.  He's gathered quite a unit, with the head of the label on acoustic and electric pianos, Mr. Holland (bass, of course), Seamus Blake (tenor saxophone) and Antonio Sanchez (drums), all leaders in their own right.  The program features 7 Sipiagin originals plus a new piece from Pat Metheny composed specifically for this project.  The Metheny piece "Dream Seen Later", is a lovely ballad on which Blake and Sipiagin share the melody while the rhythm section rises and falls gently beneath them.  Sipiagin's solo is, by turns, emotionally strong and contemplative while Blake plays a bluesy solo that shows great restraint.  The title track opens with a quiet solo piano melody - when the rest of the band enters, the melody line features a smart arrangement where the saxophone and trumpet pay in unison and then split in a call-and-response only to come back together.  The song has the feel of a mid-1960s Herbie Hancock composition.  The musicians really dig into "End Of..." with Rubalcaba, Sanchez and Holland in the driver's seat.  Sipiagin and Blake push back against that rush of rhythm and the tension created is irresistible.

Holland strums the intro to "With The Tide", Sanchez dancing between his cymbals and Sipiagin creates a smart melodic line that moves in and around the rhythms.  Rubalcaba's solo is winsome and reflective even as the drummer stokes the fire beneath him.  The pianist steps back and plays a dreamy accompaniment to the trumpet and saxophone solos.  Holland's thick tones work well with Sanchez's busy percussion, producing a feeling of buoyancy.  The intertwining of trumpet and saxophone at the onset of "The Maze"paints an aural picture of someone scurrying about trying not to get stuck.  As the trumpet solo begins, the tension of the opening resolves and the music dances forward.

Theres a feeling of relaxed urgency on "From Reality and Back";  that's not to say there is no fire in this music.  Alex Sipiagin and his talented cohorts understand how to create excitement without overplaying and without flash. They can and do play with great stye and grace - you'll hear something new each time you sit down and pay attention.  For more information, go to www.alexsipiagin.com.
Posted by Richard B. Kamins at 11:15 PM