Firehouse 12, 45 Crown Street in New Haven, welcomes back pianist Dan Tepfer - he last appeared in the performance space several years ago as a member of the Rob Garcia Quartet.  This time, he's the leader of a Trio that features bassist Ben Street and drummer Ted Poor.  They'll be playing music from a new CD thhat should be released fairly soon. Tepfer has been on the contemporary music scene for less than a decade but has already made quite an impression on critics and listeners.  He's worked extensively with saxophonist Lee Konitz, recorded a fascinating version of Bach's "Goldberg Variations" that included his own "Variations", appeared on fine recordings by bassists/composers Alexis Cuadrado ("Noneto Iberico") and Anne Mette Iversen ("Poetry of Earth") and played several gigs (but sadly never recorded) with drummer Paul Motian. 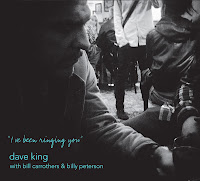 Many fans of the contemporary jazz scene know the hard-driving drummer Dave King from his work with The Bad Plus, Happy Apple and his different solo ventures.  "I've Been Ringing You" is his third release as a leader for Sunnyside Records and finds him in a more contemplative trio setting than TBP.  Joining him is the legendary Midwestern bassist Billy Peterson, who has played with artists such as Prince, Ben Sidran, Bob Dylan, Leo Kottke, the Steve Miller Band and multi-instrumentalist Ira Sullivan. In the piano chair is the masterful artist from the Upper Peninsula of Michigan, Bill Carrothers whose repertoire ranges from abstractions of Civil War music to reinterpreting the music of Clifford Brown for piano trio (and beyond.)  King has recorded with the pianist on 2 projects, including the spontaneously improvised "Shine Ball", released on the Fresh Sound New Talent label.

With the exception of the title track (a ballad with a melody line reminiscent of "The Alcotts" movement from  Charles Ives' "The Concord Sonata" and is credited to the Trio), the group performs pieces that most people should recognize.  The opening cut, Gordon Jenkins' "Goodbye", begins with King creating long tones on the waterphone before Carrothers and Peterson enter, the pianist caressing the melody while the bassist lays down a simple foundation. The piece slowly develops, never going beyond a crawl, fading on the bass notes and waterphone.  Ornette Coleman's oft-recorded "Lonely Woman" also moves slowly but here one hears the impressive bass counterpoint and King's active brush work.  At times, the piano phrases sound like klezmer melodies then moving onto contemporary classical lines.  Quiet yet intense, the track is a highlight of the CD.  King really "bounces" the beat on "People Will Say We're In Love" while Peterson also pushes forward but Carrothers, who enters 70 seconds into the 3:23 cut, is no hurry as he explores the handsome melody.

Recorded in 4 hours on a March day in Minnesota, "I've Been Ringing You" is a music for a quiet night. Dave King, who can be quite a powerful player, whispers much of the time, preferring to allow the melodic work of the pianist and bassist to stand out. Well worth your time, this 38-minute gem should find a home in your soul. For more information, go to www.sunnysiderecords.com.
Posted by Richard B. Kamins at 10:35 PM