The Fall 2012 Season rolls on along at Firehouse 12 in New Haven, this week (10/05) opening the performance space for 2 sets by the Tyler Blanton Group.  Vibraphonist Blanton, a native of California, moved to the right Coast in 2007 and soon began working with musicians such as saxophonist Donny McCaslin and drumming Matt Wilson.  For his 2010 debut CD, "Botanic" (Ottimo Music), he utilized 2 different rhythm sections with 2 tracks featuring bassist Aidan Carroll and drummer Richie Barshay and the remaining 6 with the foundation of The Wee Trio, bassist Dan Loomis and drummer Jared Schonig. Loomis and Schonig will be on board for Friday's night gig as will be saxophonist Joel Frahm (who also appears on the recording.)

Blanton's music is quite melodic while not shying away from rhythmical complexity.  Pieces such as "Foreshadowing" and "Hemming and Hawing" really swing yet there are quick shifts in the tempo that keep both the band and listeners on their toes. While the leader is a fine soloist with a fuller tone that has more of the feel of a marimba, Frahm's soprano saxophone really soars throughout the recording.  One should expect the same in the performance - in fact, since the group has had more time working together since the January 2010 studio sessions, the music should have even more snap and crackle. 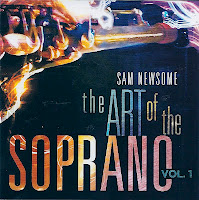 "The Art of the Soprano, Volume 1" (self-released) is the third and latest installment in a series of solo recordings from saxophonist Sam Newsome. For this CD, the adventurous and highly creative Newsome recorded 3 suites, "The Ellington Medley", "A Love Supreme" and the original "Soprano de Africana". Instead of programming the suites sequentially, the order is shuffled, mixing the familiar melodies with the original piece to stimulate the listener.

For the Coltrane pieces, Newsome plays his soprano into the strings of a piano while pressing down the sustain, or damper, pedal.  The effect  creates all sorts of overtones as well as a fullness that makes the sound of his saxophone even larger.  Throughout the medleys, Newsome also creates rhythms by clicking the "keys", imitating African drums, marimbas and thumb pianos.  On "Zulu Witch Doctor", the overdubbed rhythms support the haunting melody while on Ellington/Tizol's "Caravan", he intersperses the rhythms with a thrilling (and trilling) reading of the vivacious melody.

On my initial listening (without liner notes), I mistook the "Resolution" section of "A Love Supreme" for a Thelonious Monk composition (which, knowing John Coltrane's relationship with the piano master, should not come as a surprise, especially in a "stripped-down" reading such as this.)  Newsome's approach to the Coltrane music is refreshing; from the husky, full-bodied, introduction to "Acknowledgement" to the high wailing opening of "Pursuance" to the wonderful blend of melody and silence on "Psalm", this music sounds very alive, forceful and relevant.

"The Art of the Soprano" should be played from beginning to end to get the full scope of its grandeur and, yes, beauty.  Sam Newsome reshapes the venerable and venerated music of John Coltrane and Duke Ellington and makes us hear with new ears while his 4 original pieces blend tradition and creative thinking in ways that educate as well as entertain.  Don't miss this excellent recording - for more information, go to www.samnewsome.com. 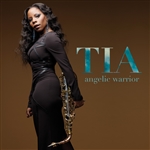 There's a lot to like about "Angelic Warrior", the 3rd CD by saxophonist/composer Tia Fuller.  First and foremost, it's the great band that interprets this music, starting with her sister Shamie Royston (piano, Fender Rhodes), bassist Mimi Jones and her brother-in-law, the fine drummer Rudy Royston (regular readers know how I feel about Mr. Royston, one of the best and most creative players on the scene.) 6 of the 13 tracks feature the sterling bass playing of John Pattitucci, here (mostly) on electric piccolo bass.

The CD starts out forcefully with the McCoy Tyner-inspired "Royston Rumble" (Mrs and Mr Royston really shine) and the funky, hard-edged "Ralphie's Groove", with more great drumming and exciting soprano sax work from the leader as well as a strong piccolo bass solo. Ms. Fuller's hearty soprano sax  leads in the title track, a piece driven by the martial drum work and propulsive bass lines of Ms. Jones.  Dianne Reeves lends her voice to a mesmerizing reading of "Body and Soul", supported by the hypnotic piano.

Terri Lynne Carrington replaces Mr. Royston on 3 tracks, including the clever re-arrangement of Cole Porter's "So In Love/All of You" - she locks into the beat with Pattitucci, here on acoustic bass, and they provide a lively foundation for the short yet pithy tenor saxophone lines. The hyper-active take of Ray Noble's "Cherokee" pairs the 2 drummers and, while the tenor sax solo is quite fine, the frenetic pace takes the piece off-course for this listener.

That's only one minor blemish on an otherwise fine program.  Tia Fuller continues to mature as both a composer and musician (her soprano playing is really quite fine) and her "family" band nurture, push and complement her perfectly.  "Angelic Warrior" is an apt title for this strong recording.  For more information, go to www.tiafuller.com.