When you go to the website of guitarist/composer Miles Okazaki, one can get lost in his explanations of his music.  When you listen to his new CD, "Figurations" (Sunnyside), one can lose him-or-herself in the impressive musicianship, the strong interplay and how each musician gives his all.  Recorded live at The Jazz Gallery in New York City in June of 2011, the music features the quartet of Okazaki, Miguel Zenon (alto saxophone), Thomas Morgan (bass) and the electrifying percussion of Dan Weiss.  Zenon and Weiss have appeared on all 3 of the guitarist's recordings and what is noticeable over the yeas and the session is how they maintain their individuality in the different settings. The saxophonist can and does play with great celerity yet there is always a clarity to his notes.  He and the guitarist fly over the persistent rhythm section on "Rain"- Okazaki and Weiss then "converse" while Morgan, as is his style, is the foundation of the music. The bass solo that opens the title track is slow and thoughtful, filled with little silences that make the melodic fragments stand out. He picks up the pace for the main body of the track, an insistent piece built from Weiss's powerful (yet neither nor ponderous) rhythm force. The guitar solo blends element of bop figures with the melodic experimentation of John Coltrane, repetitive figures that move in and out while building intensity.  Weiss plays with the tempo, dropping out at the beginning of the saxophone solo then returning with a (rhythmic) vengeance. The drummer takes the lead on "Mandala", a composition that accentuates his ability to be both a rhythmic and melodic force.  Zenon, who is a powerhouse throughout, truly shines on "Corazon", where (like the drummer) he not only displays a fine melodic sensitivity but also displays a strong percussive side.

Okazaki, even on the uptempo pieces, moves the songs forward on the strength of the melody.  Like Zenon, his solos often have a forceful percussive edge (reminding this writer of Larry Coryell and Joe Morris, both players who can "speak" volumes without a high level of volume.)  Though his music has an intellectual structure, the musicians play with such joy and emotion that it is easy to fall under the spell of "Figurations".  And, this music benefits greatly from being recorded in a "live" setting  - one can truly feel that Miles Okazaki and company connected with the audience (which is what all music should do, make connections on many different levels.)  For more information, go to www.milesokazaki.com. 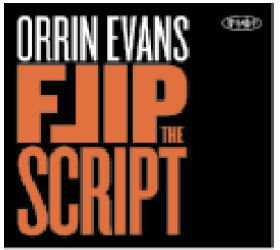 Pianist-composer Orrin Evans makes music that can be confrontational, hard-edged, and vigorous yet has a melodic side that, like Charles Mingus, allows his pieces to go in many and varied directions.  Evans has released a series of CDs on Posi-Tone Records that displays his many talents, from the forceful Captain Black Big Band to the trenchant sounds of Tar Baby (with the dynamic rhythm section of bassist Eric Revis and drummer Nasheet Waits) to his celebration of Philadelphia on "Freedom" to his tribute to saxophonist Bobby Watson on "Faith in Action."  His new CD, "Flip The Script", leans more towards the aggressive (in a good sense) nature of Tar Baby, thanks (in part) to the work of bassist Ben Wolfe and drummer Donald Edwards.  Evans, to me, is a 21st Century Jaki Byard, someone who knows his history, understands the roots of  jazz and is not a slave to tradition.  At times, I hear the influence of Bud Powell in the forward motion of his solos (especially on the faster songs.)  And, on ballads, such as "Someday My Prince Will Come", there is a "painterly" touch to his delicate phrases, a sensitivity that embraces the quiet side.

Like Byard, all music is fair game to Evans.  There is an elegiac solo piano reading of "TSOP (The Sound of Philadelphia)", the theme of "Soul Train" composed by the hit-making machine of Gamble & Huff.  Although there is nothing in the notes, this bluesy and touching piece has to be a dedication to the late Don Cornelius.  The Trio dances through a hard-bop adaptation of Luther Vandross's "A Brand New Day", with Wolfe's furious "walking" bass and Edward's percussive barrage driving the pianist forward.  The title track barrels forward with Evans matching the intensity level of the rhythm section while creating memorable melodic lines.  "Big Small" is an original blues tune, thick piano chords and short melodic phrases over the rock-solid bass lines and Edward's fine drum work (he sounds as if he's talking back to the piano during Evans' solo.)

"Flip The Script" might just refer to a concept in which a person gives equal weight to the good and bad things in his life and chooses to take a positive attitude.  Not easy for a musician to make his or her way through the world yet there is so much creativity to be found, not only in the world of jazz but also in classical, hip hop and folk.  Orrin Evans creates music that can make you dance, make you sit back and get lost in the quiet melodies; it should make you see that there are so many possibilities if you allow your creativity to flow.  For more information about his music, go to www.orrinevansmusic.com.  (The CD will be released on June 12, 2012; here is a track, courtesy of Posi-Tone Records & IODA Promonet: