As I write these words, Memorial Day parades are winding down throughout the area (save for those few towns who still celebrate on the 31st, the date originally chosen for Decoration Day.) The holiday has been celebrated since several years after the cessation of the War Between the States or the Civil War. People gather on town greens to hear speeches, build statutes and/or monuments to the fallen and drape their houses in flags.

But, if we stop to think about the war that begat the holiday and the reasons why the North fought the South, one realizes that, for some portion of the society, that war did not end in 1865.  President Lincoln did free the slaves but his successor, President Andrew Johnson, did much more to ensure that Black people would not enjoy their freedom.  In fact, it was not until after the assassination of another President - John F. Kennedy - that the Civil Rights Act was passed.  Today, we have a President who is an African American (certain conservative commentators stress the African and deny the American) and it is true that racism, despite the tremendous advances of the past 100 years, is still part of the fabric of American society. 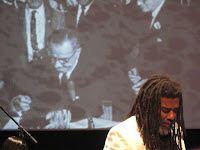 Though instrumental music is usually considered to be abstract, the titles of the tracks gives the listener a good entry into Smith's creation.  The title of the project refers to the decade between Brown vs the Board of Education (1954) and the Civil Rights Act (1964) - Compositions include "Rosa Parks and the Montgomery Bus Boycott, 381 Days", "The Freedom Riders Ride", and "The Little Rock Nine: A Force for Desegregation in Education, 1957."  However, the composer takes his inspiration from events that occurred well before and after the decade so there are also pieces such as "Dred Scott; 1857" and "September 11, 2011: A Memorial." While the music has impressive gravitas, the titles are an important factor in telling the stories.  In live performance, Jesse Gilbert, founder of Dark Matter Media, LLC, creates "live visuals" on the screens behind the musicians.  His work is also integral in connecting the music to the events.

This music is not about flashy solos, not about technical wizardry; Wadada Leo Smith's trumpet serves as a clarion call.  He wants to wake the world up, shake the complacent among us who believe that, with the Emancipation Proclamation and the passage of the Civil Rights Act a century later, the wounds were healed.  This music deserves to be heard and seen; kudos to Cuneiform Records for releasing the entire work.  Now, concert presenters need to open their halls to allow so that this history does not disappear under the weight of revisionists.

Yes, there is a lot of music to digest; it makes great sense to spread out your listening so that you can begin to understand the shape of the music.  Don't ignore "10 Freedom Summers" because of the subject matter or the length of the tracks or the fact that this is really an ensemble piece and not a bunch of songs with solos.  For more information, go to adagio.calarts.edu/~wls/.

Like many CDs, this package is already showing up on "pirate" sites.  Considering the time and energy musicians put into their life's work, downloading from those sites is a true slap in the face (as well as the wallet.)  Yes, Wadada Leo Smith received funding from numerous charitable organizations to create the pieces that make up "10 Freedom Summers" but it takes a lot of money to hire musicians and copyists, rent rehearsal halls, pay agents, and do everything one has to do to bring the music to the attention of the public.  Stealing it stinks.
Posted by Richard B. Kamins at 11:05 PM