Drummer/composer Rob Garcia leads a splendid quartet, each player bringing unique talents to the leader's music. The band's debut for BJU Records, "Perennial" (2009) showed up on many "Best-of" lists and I would be surprised if "The Drop and the Ocean" doesn't make many of this year's lists.  The blend of Noah Preminger (tenor saxophone), Dan Tepfer (piano) and John Hebert (bass) with Garcia's ambitious compositions is exemplary.  If you are familiar with Preminger's work, you know he usually thinks melody first and he does that here as well but there are pieces that make him stretch.  "Will", the opening cut, starts off with a saxophone Morse Code that anticipates the circular melody.  Despite the urgency of the theme and rhythm below it, the 4 do not rush pell-mell into the work.  Tepfer, who is yet another one the young pianists with a definitive style creates a solo that builds off the energy of the rhythm section and sets the stage for Preminger to create a solo that reshapes the urgent opening notes, twisting and curling around the active drumming.  Hebert also helps to shape the pieces - his insistent bass lines beneath the declamatory melody line on "Boundaries" push against the tumultuous drums and cascading piano lines.  His solo, coming after Preminger's husky tenor spotlight, is rich with melodic lines, allowing Garcia to create serious color beneath him.

Other highlights include the driving and insistent "River" featuring a solo from Tepfer that, at times, echoes Andrew Hill without aping his style as well as Preminger's far-ranging and emotionally charged solo.  "Humility" opens with a handsome piano spotlight (sans rhythm section) and, after Preminger voices the sweet first melody line, drops into a tempo that starts and stops with Garcia's active drumming alongside Hebert's driving bass lines.  Tepfer's two-handed attack at the piano is a sharp counterpoint to Preminger's subtle tenor solo.  There's a New Orleans feel in the shifting rhythms on "String and Poise" and admirable work from the bass and drums as they push/pull the piece along.

3 of the 12 tracks are short drum solos - titled "Flash"and numbered 1, 2 and 3, the pieces allow Garcia to be rhythmic and melodic and do not distract from the 9 Quartet pieces. I cannot wait to hear the 4 play this exciting music live - they'll be at Firehouse 12 in New Haven, CT, on Friday October 21.  In the meantime, "The Drop and The Ocean" is music that moves the body, engages the mind and satisfies the soul.  One cannot ask for more than that! For more information, go to www.robgarcia.com.
Here's a taste of "The Return", a track that shows the influence of Ornette Coleman, courtesy of BJU Records and IODA Promonet.
The Return (mp3) 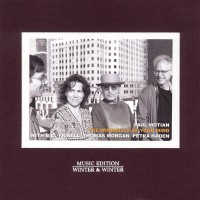 Paul Motian's style on the drums may have "calmed down" over the last few decades but he remains one of the more musical drummers on the planet.  "The Windmills of Your Mind" (Winter & Winter) features long-time compatriot Bill Frisell (guitar), the fine young bassist Thomas Morgan and the vocals of Petra Haden (daughter of Motian's section mate Charlie Haden.)  11 of the 16 tracks are standards, songs framed by Frisell's spare guitar chords and Morgan's melodic bass lines.  Underneath is Motian, not driving (most of) this music but subtly steering the pieces with his minimalist style (lots of brush work and cymbal shadings.)  Ms. Haden stays true to the melody lines, with few if any vocal embellishments.  Her work on "I Loves You Porgy" and "Tennessee Waltz" are emotionally rich while her lovely, soft, take on the  title track gives the oft-recorded song new life.  Frisell's rhythm work is absorbing while Morgan serves as a second melodic voice.  Motian's brush work is so quiet and spare that he is more of a sonic "painter" than pulse maker.

The 5 Motian originals are all instrumentals but keep the mood of the other tracks.  Morgan's solo on "Wednesday's Gone" is short yet sublime while Frisell's guitar on "Backup" is evocative of moonlit nights in the fall.  Motian's drumming on "Trieste" (one of his older tunes) swings in his unhurried yet tuneful manner.

Because of the uncluttered style of this music (and the superb sound quality of the CD), "The Windmills of Your Mind" is so satisfying.  One expects that Bill Frisell's work will be pleasing but, here, Thomas Morgan's bass work absolutely stands out. Petra Haden is out front but fits herself sweetly into the flow of the music.  Meanwhile, the 80-year old Paul Motian is the soul, the percussive painter, of this quartet, allowing the melody to carry the day throughout.  For more information, go to www.winterandwinter.com.

"History of Jazz in Reverse"(TUM Records) is a sweet release from FAB Trio, the hardworking ensemble of Joe Fonda (bass), Barry Altshcul (drums) and Billy Bang (violin).  Recorded late in 2005 (after a successful European tour), this music is driven by strong melody lines, hearty rhythms and the excellent interactions of three men who enjoy each others company.

When you listen closely, one cannot tell if it's Bang's insistent and energetic violin, Fonda's lusty bass lines or Altschul's hard-edged drum work that drives the music. Tunes such as "Homeward Bound", "Implications" and "From the Waters of New Orleans" build up such a head of steam, it can push the listener up out of his chair.  When Bang (who passed in April of this year) gets going, the music seems to levitate.  Yet he can be subtle and oh-so-bluesy - the sweet plucked violin opening of "One for Don Cherry" feels like a blend of Appalachian folk songs with an Indian mantra.  The interplay of Fonda's bass and Bang's violin in the middle of the piece is mesmerizing.  The program closes with "From the Waters of New Orleans", replete with second-line "parade" drumming, a fiery bass solo and very funky violin.

Do not overlook this excellent recording from FAB Trio.  The sound mix allows each instrument to stand out so you can really dig into Barry Altschul's creative drum work, ride along with Joe Fonda's moving bass lines, and luxuriate in Billy Bang's delightful violin playing. To find out more, go to joefonda.com.

Tenor saxophonist Ernie Krivda has issued a slew of Lps and CDs since he first came to critical notice in the 1970s and one aspect has remained constant throughout the years - his big, round, tone and penchant for melody.  "Blues for Pekar" (Capri Records) finds him in the company of "The Detroit Connection" - pianist Claude Black, bassist Marion Hayden and the steadily swinging drums of Renell Gonsalves - plus guest appearances on 2 tracks each by Dominick Farinacci (trumpet, flugelhorn) and Sean Jones (trumpet).  If you're a fan of hard-bop, there is much to like in this program.  The rhythm section thunders through Dexter Gordon's "Fried Bananas" while Krivda and Farinacci trade lines and pianist Black drops "quotes" like mad.  Jones joins the fun on Sonny Rollins' "Valse Hot" displaying his rich tone and finely articulated lines while Krivda swings with glee. Dig Ms. Hayden's thick bass lines and Gonsalves' strong drive.  The saxophonist evokes Coleman Hawkins and Ben Webster on "More Than You Know" and his interplay with Black throughout his long solo is impressive. The title track is dedicated to comic writer and music critic Harvey Pekar (1939-2010), like Krivda, a native of Cleveland, Ohio.  While the music does not really capture the cartoonist's prickly style, it truly celebrates his love of music.  Farinacci shines, pushing Krivda to dig deep and create a fine, not flashy, solo.  It's true - Krivda playing is substantial, melodically  and emotionally rich and he rarely plays to "show off."

Ernie Krivda does have an impressive catalog with a good portion of his best work on Cadence Jazz Records or its subsidiary, CIMP.  "Blues for Pekar", his debut on Capri Records, is very good and lots of fun.  Dig in!  For more information, go to www.erniekrivda.com.
Posted by Richard B. Kamins at 10:02 PM