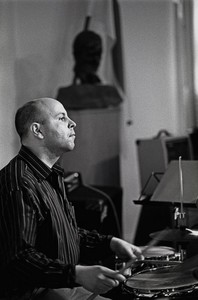 I have been waiting for this week since I received the Firehouse 12 Fall Concert schedule in early September.  This Friday (October 21), the Rob Garcia 4 comes to the intimate performance space/ recording studio to play 2 sets of original music.  Drummer-composer Garcia, a native of Pelham, New York, grew up surrounded by music and soon fell in love with the drumming of Keith Moon (from The Who).  In his college years, he renewed his interest in jazz and studied with Charli Persip and Adam Nussbaum (and others.)  Over the past decade-and-a-half, Garcia has worked with Wynton Marsalis, Anat Cohen, Woody Allen (!), and David Binney (to name but 4.)  His debut CD as a leader was issued in 2001 followed in 2007 by a larger group CD "Heart's Fire" (under the monicker Rob Garcia's Sangha.)

In 2009, he convened the group that will join him in New Haven (well, most of them.)  Saxophonist Noah Preminger (a Connecticut native), pianist Dan Tepfer and bassist Chris Lightcap recorded "Perennial" for Brooklyn Jazz Underground Records - the CD made many year-end "Top 10" lists (including mine) for its inventive mix of melody and rhythms as well as the impressive musicianship.  For the 4's new recording, "The Drop and the Ocean" (BJU Records - reviewed here), John Hebert replaced Lightcap, adding his distinctive voice to the ensemble.  What impresses me most is that Garcia's music is more concerned with melody than with flashy solos.  Tepfer is such an inventive player and Preminger never overplays, often displaying a softer tone (a la Charles Lloyd) on solos that float rather than fly.  There are many moments when the quartet lets loose but rarely in a frenetic manner.  The Firehouse 12 website lists Joe Martin joining the band for this date and he's no slouch when it comes to bass playing.

Here's a cut from "The Drop and the Ocean", courtesy of BJU Records and IODA Promonet:
Boundaries (mp3) 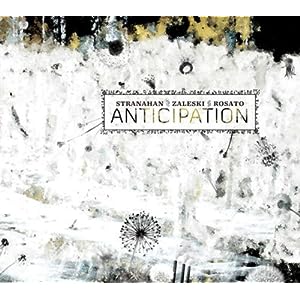 Yes, another piano trio CD and, yes again, it's pretty darned good.  The cooperative trio of (Colin) Stranahan (drums), (Glenn) Zaleski (piano) and (Rick) Rosato (bass) spent February 20, 2011, in NFA Studios in Colorado and created "Anticipation" (Capri Records).  The music moves easily from track to track, a smart blend of originals and standards, with nothing rushed or overdone.  Stranahan, whose previous CD was quite attractive (reviewed here), is a young player with very mature ears.  His brush work on his piece "First Rain" sizzles and sighs while his "bop chops" on Zaleski's "On The Road" should make your feet tap in happiness. The pianist took part in the 2011 Thelonious Monk Piano Competition (ultimately won by Kris Bowers) and has been receiving great reviews for his fine melodic style.  One can hear the influence of Bill Evans on Rosato's "Clark" yet, most of the time, he's his own person. He swings sweetly on the Miles Davis/Gil Evans classic "Boplicity" and really shines on his own composition, the lovely ballad "Deep Blue."   Rosato, who's only 22 years old, not only locks in the bottom but also is a very melodic bassist whose phrases are fluid and well-placed.  The urgency in his forceful lines on "All The Things You Are" helps to make the piece sound new.

"Anticipation" is good music and these 3 young musicians are yet another hopeful sign that jazz will continue to excite listeners for many more years.  For more information, go to www.glennzaleski.com or www.colinstranahan.com. 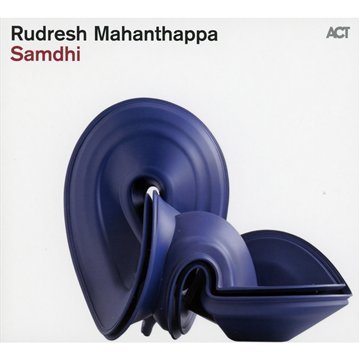 The alto saxophone sound of Rudresh Mahanthappa, with its tart yet appealing tones, sometimes brings to mind the sound of the North Indian shenai (a double-reed oboe-like horn.)  On his new CD, "Samdhi" (ACT Music), one can hear that sound and so much more. This is the saxophonist's "electric" music, with a quintet that features the fluid electric bass lines of Rich Brown, the high-energy drumming of Damion Reid (whose snare work is, at times, incredible), the inventive and fiery electric guitar work of David Gilmore and the active Indian percussion of "Anand" Anantha Krishnan (mridangnam and kanjira).  On top of this, you add the Mahanthappa's rapid-fire alto phrases and this music has the power to pin the listener to the wall. Smartly, the leader adds a "spotlight" piece for himself and his cohorts with Reid and Krishnan performing a percussion dialogue. And this is not all "strum und clang" - several pieces rely on the intricate interplay of the percussionists with Brown's thick bass tones. "Playing With Stones" opens with an Indian melody played by the front line while the bassist creates a swirling pattern on the bottom.  "Ahhh" has a mournful melody line played by guitar and alto in unison but when Mahanthappa puts his alto through the laptop, thickening the sound, the piece catches fire.  There is a bluesy Bo Diddley-style rhythm in the theme section of "Breakfastlunchanddinner", a bit of Southside Chicago mixed with downtown Mumbai.  The alto solo reaches a fine climax then Mahanthappa gets "soulful" leading into Gilmore's dizzying solo.  There's more "soul music" on "For All The Ladies", the ballad that closes the CD.  Reid and Krishnan are magical here as well, with a blend of both sensitivity and force but never overkill.

"Samdhi" has much to offer the adventurous listener, from Mahavishnu-like "burnout" to introspective solo pieces.  The band, minus Krishnan, is currently on a European tour and will be appearing at The Jazz Standard in New York City (11/01 & 02), the Regatta Bar in Boston (11/03) and Firehouse 12 in New Haven (11/04).  One can just imagine how this music will have grown by then.  In the meantime, latch on to the recording and play it loud.  For more information, go to rudreshm.com.

"Crosby Street" (14th Street Records) is the debut CD from tenor saxophonist Jake Saslow.  All but one of the 7 tracks are original works (Horace Silver's "Lonely Woman" is the one exception) and the recording, like its cover, mixes brightness with shadows.  There's lightness in the sound of the tenor (a nod towards Charles Lloyd, perhaps), chiming guitar chords from Mike Moreno (he appears on 5 cuts), excellent piano explorations and backgrounds from Fabian Almazan (he plays on 4 tracks), and the pleasingly fluid rhythms supplied by bassist Joe Martin and drummer Marcus Gilmore.  The music does not have many "highs" or "lows" yet there is an intensity in "Taiga Forest" that pulls one into its melodic variations and smart solos.  Moreno catches fire on "Early Riser", with a strong push from Gilmore while the leader's interactions with the piano accompaniment are vibrant.

The CD closes with 2 ballads;  "How Things Were" has a melancholy melody, an emotional solo from Almazan followed by an introspective solo from Saslow while "Until Next Time" has a hopeful melody and the leader's most impressive solo (fine work from Moreno in weaving in and out below the solo.)

"Crosby Street" may not stir your emotions on first listen but go back with open ears and let the sounds wash over you. Pay attention to the stellar rhythm section, the "behind the scenes" work of Moreno and Almazan and the sweet emotionally vulnerable sounds of Jake Saslow.  For more information, go to jakesaslow.com.
Posted by Richard B. Kamins at 9:44 PM