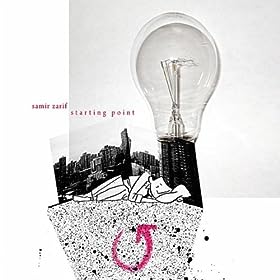 Starting Point - Samir Zarif (Mythology) - Saxophonist/composer Zarif, a native of Houston, Texas, has studied and worked in New Orleans, attended the Manhattan School of Music, formed several groups including The Paislies and The Story (the latter featuring pianist John Escreet) and has recorded with vocalist Maria Neckam.  His debut CD, recorded for David Binney's Mythology label, is a sonic kaleidoscope featuring Zarif's impressive compositions and expressive saxophone work.  "Letter to the Brothers" finds him in a trio setting with bassist Zach Lober and drummer Greg Ritchie (both members of The Story); the 3 create a lovely and lively interchange led by Zarif's expressive soprano saxophone (his tone is reminiscent of both Branford Marsalis and John Surman.)  The forward motion of the song, propelled by Lober's muscular bass lines and Ritchie's artful drumming, draws in the listener.  Zarif's tenor work is on display, alongside alto saxophonist Lars Dietrich (also a member of The Story), on the energetic "Precocious Nation" - powering this piece is the fine young drummer Colin Stranahan who really prods the soloists with his percussive twists and turns. The drummer also shines on "Fear and Deception", the other track where the 2 saxophones ride his powerful percussion.  Still, the tune contains quieter moments where it seems that the reeds are conversing like friends on a stroll.

Yes, there's more to Samir Zarif than "blowing over the changes" - he not only tells stories with his reeds but also with his poetry and spoken word pieces.   "The Old Man's Box" has fascinating interplay of electric bass, soprano sax and drums; Lober takes a long and involved solo while Zarif plays long, quiet, tones on the saxophone beneath him.  The leader then goes it alone to tell "The Story of the Old Man's Box", complete with wordless vocals moving in and out of the mix, electronics creating a church choir cushion and Zarif telling a story inspired by the writings of Buddhist philosopher Daisaku Ikeda.  It will take you several times before you can really hear the story but, take your time allow the words to sink in.  Maria Neckam appears on 2 tracks, the slowly paced "Dancing in a Garden of Dead Roses", her nuanced vocals growing out and then intermingling with Zarif's tenor saxophone. The two sing together on "This Life" while Zarif's tenor floats behind and around them, staying (mostly) in the horn's mid-range, the piece rising and falling on both the voices and Stranahan's insistent 4/4 beat. (Zarif appears on 3 tracks of Ms. Neckam's fine 2010 Sunnyside CD, "Deeper" alongside Dietrich and Stranahan - that disk is well worth exploring.)

Some may argue that "Starting Point" goes in too many directions, that it's not "jazzy" enough - don't pay any attention to that argument.  Look at the title. This is the "beginning" for Samir Zarif and he has much to say.  He is a confident artist, setting his own guidelines and boundaries.  Adventurous listeners reap the benefits of his hard work and dedication to his craft.  For more information, go to www.samirzarif.com. 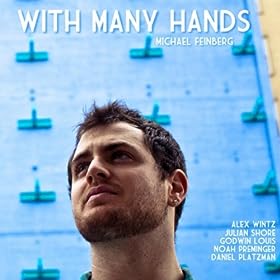 With Many Hands - Michael Feinberg (Self-released) -Bassist/composer Feinberg, a native of Atlanta, Georgia, has gathered a sextet of his contemporaries (at the age of 24, tenor saxophonist Noah Preminger is the "veteran" of the group!) to create his second CD as a leader.  Also on board are alto saxophonist Godwin Louis (from Bridgeport, CT), pianist and Rhodes player Julian Shore, guitarist Alex Wintz and drummer Daniel Platzman (the latter two appeared on Feinberg's 2009 debut "Evil Genius.") There are many dimensions to the bassist's music, from the powerful fusion of sounds on "Temple Tales" (wailing guitar work from Wintz atop Platzman's energetic drums) to the handsome blend of saxophones on the title track. The piece is somewhat melancholy, poetic, with a short bass solo leading into a piano solo that unwinds easily over the quiet yet active rhythm section. The saxophonists solo together; one hears the influence of Wayne Shorter on the phrases as they wrap their lines around each other without ever turning chaotic.  The Shorter influence is also evident on "NBD", a piece that follows a similar path to the title track, i.e., theme, bass solo, piano solo, but here Louis gets the spotlight and makes the most of it with a fiery exploration.  Preminger and Louis are featured together again on "Fighting Monsters", a piece that opens with both reed players reading the theme. The former takes the first solo, pushing the energy level several notches and Louis follows by kicking it even harder.  Then, they trade phrases for the second half of the tune over the aggressive drumming and strenuous walking bass lines.

There is so much to like on "With Many Hands", from the intelligent compositions and voicings to the splendid interplay and strong soloing.  The sextet sounds like a "working band", an aggregation that really knows each others' strengths and one that never settles for cliche. For more information, go to www.michaelfeinbergmusic.com.
Posted by Richard B. Kamins at 3:38 PM