The Power and Joy of Interplay 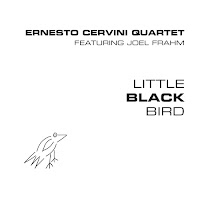 Little Black Bird - Ernesto Cervini Quartet (Anzic) - I started to review this CD several months and got sidetracked, then mislaid the disk.  Talking to Joel Frahm prior to a live performance prompted me to go searching.  Glad I did as this CD, Cervini's 2nd as a leader, really shines.  Bursting out of the gate with "Coconut Bill", a rampaging hard-bop burner, the music is alive and often lively.  Joining the drummer/composer is pianist Adrean Farrugia (piano) and Jon Maharaj (bass), both of whom played on Cervini's 2006 debut. Replacing saxophonist Mike Murley is the afore-mentioned Frahm, whose dexterity and soul continues to impress.  What stands out is the quality of Cervini's original music - he knows his sidemen well and the music is challenging and fun.  Farrugia's rippling piano lines flow behind and in front on "Mia Figlia." The drummer rides the waves of sound, pushing and accenting the piece.  Dedicated to his grandmother, "Nonna Rosa" is a sweet and sad ballad with a lovely tenor sax solo. Farrugia switches to electric piano for a pair of pieces, one written by Radiohead ("2+2=5") and the other ("Seven Claps") inspired by the British quintet's "15 Steps."  The Quartet captures the sense of Radiohead's sensual melodies and their unique rhythmic flair - Frahm plays soprano sax, displaying a sweet tone and the influence of Wayne Shorter. Perhaps the "hottest" playing comes on "Jimmy Rey" which continues to build in intensity until Cervini takes over for a long, thundering, solo before the piece closes out.
Great playing all around and one can sense the joy the quartet gets from playing this music and playing as an ensemble.  For more information, go to www.ernestocervini.com. 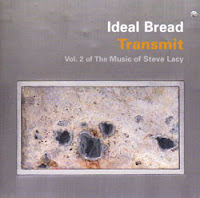 Transmit - Ideal Bread (Cunieform Records) - This quartet, led by baritone saxophonist Josh Sinton, has dedicated itself to the original music of soprano saxophonist/teacher Steve Lacy  (1934-2004).  In the early days of Lacy's career, after he had moved beyond playing Dixieland music, he co-led a group with trombonist Roswell Rudd (playing the music of Thelonious Monk) and I'd like to think that this front line of baritone and trumpet (the fine young brass player Kirk Knuffke) is a subtle and smart variation on that theme. The rhythm section of Reuben Radding (bass) and Tomas Fujiwara (drums) is creative and forceful throughout.  "As Usual" has a funky tribal beat, crisp trumpet lines and solid interaction of the front line (sometimes playing in unison, other times in harmony.)  "The Dumps" has as boppish lead line and features a halting, stuttering, ultimately hard-edged solo from Sinton and a playful romp from Knuffke.  "Longing" is a quiet ballad that slowly moves forward, Fujiwara simmering beneath the soloists but never taking over or forcing the action. There is more heat on "Cliches", with its long, twisting, melody line and fiery solos (especially Sinton.)  "Papa's Midnite Hop" swings with glee, gets a bit wild near the end but never loses its way (thanks in great part to Radding's solid bass lines.)
Steve Lacy had a long career, much of it spent in Europe. He returned to the United States early in the 21st Century and began teaching at the New England Conservatory. That's where Josh Sinton met befriended and studied with him and the idea of Idea Bread was born. The quartet's recordings shine a light on Lacy's, showing listeners its roots and its originality. Give a listen.  For more information, go to http://joshsinton.com. 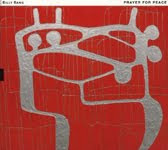 Prayer for Peace - Billy Bang (Tum Records Oy) - This lovely collection of music was recorded 5 years and is only now seeing the light of day (and on a label based in Helsinki, Finland.)  The violinist and his band (trumpeter James Zollar, pianist Andrew Bemkey, bassist Todd Nicholson and drummer Newman Taylor-Baker) hit the target from the opening note.  "Only Time Will Tell" is a tune composed by violinist "Stuff" Smith and one can hear Smith's love of blues and swing in Bang's sweet solo and Zollar's affectionate nod to Louis Armstrong. Bang has often been tagged with the label "avant-garde" but much of the music here is melodic, quite rhythmic, fiery yet in control.  The title track is a 20-minute meditation that slowly rises out of the nearly silent rubato opening, features a lyrical trumpet solo, a quiet, contemplative, piano spot under which one can the rhythm of the piece begin to take shape in Taylor-Baker's active brush work.   Bang does not enter until nearly 12 minutes in and his solo builds from short lyrical phrases to longer flowing lines and to a plaintive pizzicato line.  Percussionists Milton Cardona (congas) and Joe Gonzalez (bongos) join the band on 2 tracks, the Brazilian flavored "At Play in the Fields of the Lord" and Compay Segundo's Cuban-salsa piece "Chan Chan."  The first piece has great drive, smart solos and great rhythms created by the percussionists and pianist Bemkey.  Hang around for Bang's fiery coda.  The second piece is slower, sensual, with a growling, swaggering trumpet solo and a lovely, classically inspired solo from Bang.  The program closes with "Jupiter's Future", a bouncy yet hard-edged romp dedicated to Sun Ra.  Bemkey takes the opening solo, setting the bar high with an intense exploration. Zollar and Bang follow, pushing the music even further.  The violinist's unaccompanied closing lines set the stage for a powerful drum spot before the piece returns to its opening theme.
"Prayer for Peace" is no solemn set. Yes, it has its quieter moments (and the leader does want us to quash our war-like tendencies) but Billy Bang and company have truly given us a many-hued rainbow of creative music that deserves your attention. For more information, go to www.tumrecords.com.
Posted by Richard B. Kamins at 10:56 PM