Drummers in Charge, Vocalists in Front and An Old Master 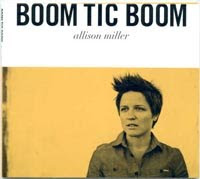 Boom Tic Boom - Allison Miller (Foxhaven Records) - This CD was issued early this year and I keep returning to listen for numerous reasons.  The sound quality is warm yet crisp, the musicianship excellent but neither facile nor glib and the material inspired.  Miller on drums paired with Todd Sickafoose on bass supporting, prodding, riding alongside and atop the inspired piano of Myra Melford.  The pianist rarely has sounded more inviting - over the past decade, it seems as if she has relaxed into her own style. Melford can be frighteningly quick and atonal, downtown bluesy and classically bent, often within the same solo. On the opening track (the drummer composed 6 of the 9 songs), Miller leads the trio in and creates a shimmering backdrop for the full piano chords and rising melody lines.  The piano solo starts easily, short bluesy lines that grow in length and power, all the while the bass and drums match Melford's intensity level.  The coda features Miller's explosive, declarative, drums solo. The one standard in the program is Hoagy Carmichael's "Rocking Chair" - the trio explores the softer, folkish, aspects of the song, allowing for Sickafoose's fine solo (he is impressive throughout) and Miller's expressive yet never intrusive trap set work. Melford contributes 2 songs, the angular, impressionistic, roiling "Be Melting Snow" and the quiet, poetic, "Night" that closes the CD in a thoughtful and serene manner.
"CFS (Candy Flavored Sidewalks)" opens with Melford plucking inside the piano, then moves into a folk-ish romp featuring the country fiddle stylings of guest Jenny Scheinman atop the playful and martial snare of Miller. There's the sly, funky, feel of "Big Lovely" with its pounding piano solo and playful bass solo.  But, listen to Miller as she dances and struts beneath the soloists, never soloing but always part of the action.
"Boom Tic Boom", with its suggestive and onomatopoetic title, is a treat for the listener from beginning to end. The trio sounds like they had a great time as the listener when he or she digs into this excellent  CD.  For more information, go to www.allisonmiller.com. 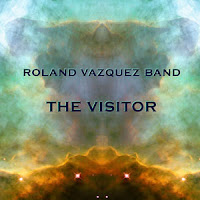 The Visitor - Roland Vazquez Band  (RVD) - Drummer Vazquez moves away from the trap set and becomes composer, arranger and conductor of a most adept 19-piece ensemble.  Composed of 5 reed players, 4 trumpeters and trombonist, piano, bass, guitar, drums, vibraphone and percussion, this band is given a set of smart melodies and classy arrangements and they "run with it." This recording, funded in part by the Aaron Copland Fund for Music, Inc., features musicians associated with the large ensembles of Maria Schneider, Darcy James Argue, John Hollenbeck and Jim Cifelli as well as a fine rhythm section of James Genus (electric bass), Luis Perdomo (piano), Ignacio Berroa (drums), Samuel Torres (percussion) and Pete McCann (guitar).  Vazquez expertly weaves the horns and reeds in and out of the Latin rhythms that pervade the program, as one can hear at its best on "Thru a Window." The piece, always moving forward on the propulsive bass and percussion, has many riveting section lines that set the stage for the fine solos (save for Perdomo unaccompanied piece that opens the song.)  Late in the song, Torres and Berroa take off over the band, raising the "heat" of the piece until the long, slow, fade. Joel Frahm creates an evocative solo at the onset of the title track, over a mysterious, halting , rhythm. The sections are slowly, skillfully, added in (dig the subtle interplay of the electric bass and bass clarinet) until Frahm retakes the spotlight with a lovely, long, impressionistic solo, yielding to Perdomo's sparkling keyboard dance. How uncluttered a rich work such as "Sevilla" seems, even with all the musicians digging into the parts.  The rhythm section work is exciting but never obtrusive as the soloists (Perdomo, Roger Rosenberg on baritone sax and Aaron Heick on alto sax) step into the spotlight.  There's a short but delightful reeds and horns  interplay before the alto solo that is captivating.
The only non-original is Clare Fischer's delightful "Guarabe", a piece that dances in and rarely lets up, even after the tempo changes 3/5ths of the way through and gets downright funky (Genus and Berroa lock in to a groove and don't let it drop.)
Despite clocking in at over 72 minutes, "The Visitor" never overstays its welcome.  Each time one listens, some new aspect of the music appears.  Whether it's the classy section work, the uniformly excellent solos, the splendid rhythm section, or the fact that these songs have well-drawn melodies and are not just placeholders for long solos, Roland Vazquez has paid his full attention to all that needs to be done to make this project successful.  Trust me - he's done excellent work.  For more information, go to www.rolandvazquez.com. 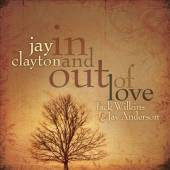 In and Out of Love - Jay Clayton (Sunnyside Records) - In her liner notes to this lovely collection of standards, Ms. Clayton acknowledges that she is "primarily known as an avant-garde singer  (kind of an out-dated term but it works)...". She states her love for standards and, after listening to these 10 tracks,  one should not doubt her her love.  Recorded in 2007 around the same time as the more experimental "The Peace of Wild Things" (also on Sunnyside), the singer is joined by guitarist Jack Wilkins and bassist/recording & mixing engineer Jay Anderson.  The 2 Jays and Jack inhabit this music, filling the pieces with the joy of melody, interplay, and quiet experimentation.  "Freedom Jazz Dance" is a whirl of sound, from the unison guitar and voice reading of the theme to the counterpoint each one brings to the solo section. Tunes such as "How Deep is the Ocean" and "My One and Only Love" that have been recorded and performed innumerable times sound reborn here. On the former song, Anderson and Wilkins swing the piece heartily while Ms. Clayton sounds, at turns, flirtatious then serious. Anderson, who has such a full, rich, tone, is alone with the singer for the first minute of the latter tune and their intimacy with the music and lyrics sets the stage for Wilkins' more stately yet flowing guitar phrases. "Sunshower" (music by Kenny Barron, lyrics by Janice Jarrett) has a lovely Brazilian lilt in the melody and Latin feel in the melody .  Listen to the way both the guitarist then the vocalist rise above the bouncing bass lines - Clayton is so percussive in her solo on this track and when she returns to the theme (after a  fine bass solo), she effortlessly blends the wordless approach with the lyrics.
With but 3 people (and none of them drummers) one might expect this music to be light. Instead, the proceedings are intimate, joyous, playful and a pleasure to take in.  If one needs to label Jay Clayton, call her a "singer/musician" - she is all that and more.  For more information, go to www.jayclayton.com. 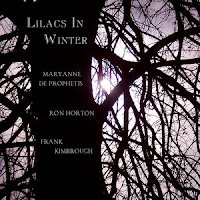 Lilacs in Winter - Maryanne De Drophetis Trio (Blue Music Group) - Ms. de Prophetis leads a trio with husband Frank Kimbrough (piano) and Ron Horton (flugelhorn) with whom she recorded her debut CD, "A Glance", in 2005. An intriguing blend of sound sculptures in which the vocalist joins the musicians as a third instrument and impressionistic poetry/songs, the program is delicate, intimate, and ultimately inviting.  4 of the 9 tracks are improvisations including 2 versions of the title track.  The first opens the program with de Prophetis moving between poetry and wordless vocals amidst shards of piano chords and Horton's expressive flugelhorn.  The 2nd version is similar yet here the piano is more expressive and the flugelhorn (now muted) more melodic.  The traditional "Wayfaring Stranger" here is a blues ballad with languid  piano lines that hint at Charles Ives as well as Jelly Roll Morton and a bluesy accompaniment plus solo.  from Horton.  The heartfelt "Hymn for Peace" has a lovely melody and rolling piano lines that radiate from the vocal.  Horton weaves in and out with soft yet moving phrases.  On "Snow", Kimbrough's articulated lines with their flowing swift current and Middle-Eastern flavor are on display until halfway through the piece when Horton joins - here, the brass twists and twirls atop the piano phrases, growing in intensity until a formal reading of the theme leads the piece out.  The song serves as a musical interlude (de Prophetis composed the piece but does not participate) in the middle of the program.
As with her previous CD, Maryanne de Prophetis has created music that defies categories and asks only that one listens with open ears.  Musical, challenging, often calming (never soporific), "Lilacs in Winter" is worth exploring. For more information,, go to www.maryannedeprophetis.com.

Moody 4B - James Moody (IPO Recordings) - 83 years old at the time of this recording, Mr. Moody is certainly not shy nor ready to retire.  Recorded the day after his previous IPO release, "Moody 4A", this CD features the same fine musicians; "master" pianist Kenny Barron, bassist Todd Coolman and drummer Lewis Nash. The tenor saxophonist sounds just fine as he and his compatriots dance through these 9 tracks, all but 2 standards. "Take the A Train" with Barron "striding" the Strayhorn melody in before the rest of the band kicks it up several notches. Coolman is the "conductor" and Nash the "steam" while "engineer" Moody steers the piece through.  "Speak Low", normally a ballad, gets a Latin treatment - Moody sounds as if he is channeling Stan Getz for his solo and dig  his dancing lines that lead the piece out.  "Polka Dots and Moonbeams" is a ballad yet, once the opening theme takes its traditional slow stroll,  the band gives the piece a nice "swinging" treatment (strong solos from both tenor and piano.) Benny Golson's "Along Came Betty" also swings with joy and an ease that illustrates how much fun the quartet had during its time in the studio.
Coolman's "O.P. Update" is a piece for bassist/cellist Oscar Pettiford that has a sweet boppish feel and a riveting tenor solo (Moody really digs into his several choruses.) The other original piece, Barron's "Nikara's Song", has a pretty melody line that Moody caresses, never rushing the pace, just languishing in the longer tones he creates.
"Moody 4B" is relaxed but not lazy music that is easy on the ears. That James Moody and company had a good time creating this program is no surprise and the listener is the beneficiary.  For more information, go to www.iporecordings.com.
Posted by Richard B. Kamins at 3:16 PM