Music That Excites and Delights 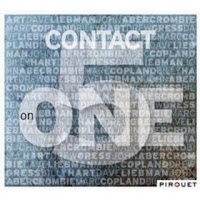 Five on One - Contact (Pirouet) - Contact is composed of 5 master musicians - Dave Liebman (tenor & soprano saxophones), Marc Copland (piano), John Abercrombie (guitar), Drew Gress (bass) and Billy Hart (drums) each has been on the "scene" for a good while.  Everyone contributes, at least, one original piece and they save the one standard, "You and the Night and the Music" for the final track.  Instead of breaking down each cut, let me illuminate what's so good about this CD.  First, it's most definitely a "group" recording - it feels like a working unit, the music breathes, the musicians are listening to each othe and the interplay is intuitive.  There are moments on the opening track "Sendup" when Copland, Abercrombie and Liebman are weaving lines around each other in the manner of The Hot Five in the 1920s.  That's not to say the tune is "trad jazz" or New Orleans Jazz but that the musicians are creating a rich tapestry.
Secondly, the music is cliche-free. Because the players trust each other, they can make individual statements and move in unexpected directions.  Thirdly, Abercrombie and Liebman have such distinctive styles.  The latter has such a "full" sound on soprano sax yet he never overblows as he displays on his romp through "Childhood Smile."  His tenor playing can be muscular but he tends to insinuate himself into a song.  He does just that on "You and The Night...", creating a solo that moves from contemplation to forceful phrases with ease and forethought. Abercrombie plays so smartly.  He can "let loose" with fiery lines (he does so on "Four On One") or play with grace of a dancer ("Lullaby for Imke".)
The rhythm section can't be beat. Gress is a strong support underneath and an expressive soloist while Hart swings, prods, pushes and caresses, often within one song.  He's a "colorist" and a sparkplug.
Copland is a smart accompanist, a playful and thoughtful soloist - his interactions with Liebman and Abercrombie make one sit up and pay attention while his rippling phrases can be mysterious and contemplative.  He's never showy or pretentious, always quite musical.
Good creative music makes one want to listen again and again because each musician is doing interesting work (and you can't take it in all at once.)  This music has swing, drive, melody, harmony and intelligence - give us more.  To  find out more, go to www.pirouetrecords.com. 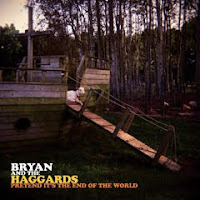 Pretend It's The End of the World - Bryan and The Haggards (Hot Cup Records) - Caveat emptor! Do not read the liner notes first. The laughter that Leonardo Featherweight's words engender might cloud your mind.  Messrs Murray (tenor saxophone), Jon Irabagon (alto saxophone), Jon Lundblom (electric guitar), Matthew "Moppa" Elliott (bass) and Danny Fischer (drums) tackle the Merle Haggard songbook.... ...deconstruct and reconstruct are better words to describe the proceedings than "tackle."  They are certainly having fun but not (really) making fun of the material.  Yes, it gets unruly at times. The opener, "Silver Wings", sounds more like Neil Young's Crazy Horse (with saxophones)  and "Lonesome Fugitive" lurches about in a drunken manner but the band never messes with the melodies.  There's a touch of "Hee-Haw" on "All of Me Belongs to You" especially the "fey" vocals and Elliott's bass solo with scat singing (he bows the bass and does his best Slim Gailliard imitation).  Lundbom's guitar roars at times like Thurston Moore (Sonic Youth) and Nels Cline (the closing "Trouble in Mind" is the best example) but he can also pick a pleasant bit of rhythm guitar ("Swinging Doors"). That latter tune has a very jazzy, angular, tenor solo from Murray. The 2 saxophonists dip and swoop around each other with abandon on "Miss the Mississippi and You."  "Working Man Blues" begins as a "rocking" country tune but then Elliott commences a rapid "walking" bass line and it's off to the races with flailing solos from Murray and Ibragon as well as a "shred-fest" from Lundbom.  The tune gets "out there" yet the band pulls it back in for the closing romp.
This same quintet us featured on Lundbom's Big Five Chord  "Accomplish Jazz" Cd from earlier this year (reviewed here) which featured a sweet take on the Louvin Brothers' "The Christian Life."  This CD is a raucous but not caustic with enough "sweet" moments that work well beside the "rave-outs."  Mr. Haggard may be flattered (he has a noticeable "rebel" streak) and music lovers with open minds and a good sense of humor should dig right into this. To find out more, go to www.hotcuprercords.com or www.bryanmurray.net.
Posted by Richard B. Kamins at 8:30 PM