3 Hot Cups for the Cold Winter 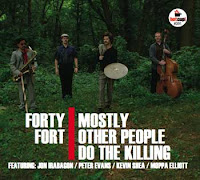 Forty Fort - Mostly Other People Do The Killing (Hot Cup 91) - Bassist/composer Moppa Elliott began Hot Cup Records almost 9 years ago as a student at Oberlin Conservatory.  "Forty Fort" is the fourth CD by his main vehicle, MOPDTK, a quartet featuring Jon Irabagon (alto & tenor saxophones), Peter Evans (trumpet) and Kevin Shea (drums, electronics.)  The music is rousing, raucous, noisy, at times respectful, witty, and filled with tremendous interplay.  The witty part starts before you even play the music.  The cover is a recreation of the Roy Haynes "Out of the Afternoon" Lp from 1962 and the liner notes (penned by one "Leonardo Featherweight") spend much of the time discussing recreating the album cover. The music within is not a recreation of the Haynes Lp but a marvelous blend of many different musical styles.  In the first minute of the opening track, "Pen Argyl", you know this is no ordinary post-Millennium "hard bop blowing session."  From the funky bass line to Shea's drum barrage to the melody lines that scramble and shake up the listener, the overall experience is "hot."  The tempo changes on a dime, with moments that sound like Louis Armstrong Hot 5 that give way abstractions along the line of the Art Ensemble of Chicago to funky breakdowns a la Tower of Power (and that happens in the first 3 minutes of the disk.)  "Rough and Ready" has a melody line and rhythmic attack that reminds this listener of Les McCann's "Compared to What?" but, of course moves out into a hard-blowing solo section in which Evans and Irabagon smoke over Shea's rampaging drums. (Something I read compared the drummer to Gene Krupa - to my ears, he's much more like Keith Moon of The Who, able to shift gears in a instant, with great propulsion.)  There are quiet moments such as the melodic opening of "Blue Ball" but, all the while, Shea's threatening to explode beneath the sax and muted trumpet lines. There's a long abstract section in the middle including a rhythm-less flurry of notes, bowed bass and splashy cymbals that lasts until the song ends (all the while, one expects the quartet to drop back into the theme.) The title track begins in a "swing mode"and, of course, continues to evolve over 8:29 seconds.

"Forty Fort" may remind some of the "anarchist music" of the Willem Breuker Kollektief but this music can also be compared to James Joyce's "Finnegan's Wake" in that MOPDTK creates their own language out of the shards of multiple musical styles. At times breathtaking and overwhelming, exhausting and ebullient, "Forty Fort" will knock your socks off - if not, check your pulse. 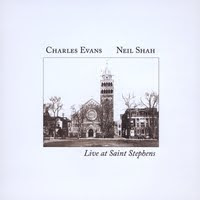 Live at Saint Stephens - Charles Evans/Neil Shah (Hot Cup 92) - Baritone saxophonist Evans and pianist Shah have been friends for years and this concert displays their comfort with each other in many ways.  One can always try to create music that is a display of technical prowess but this duo wants the listeners (both in the setting of the live concert and the person who purchases the disk) to hear a conversation, a dialogue that goes in many directions and does so without artifice.  Yes, this is composed music and yes, it has moments of improvisation and yes, you do not need to classify it in any one style (jazz, classical, pop, whatever.) This is hard music to explain to the reader because it eschews classification. Longer pieces like "On Tone Yet - Parts I, II, and III" serve to show Evans' versatility on his instrument, the clarity of his high notes and the way the duo uses silence to balance the music. Shah can be quiet and economical as a accompanist and forceful when in the spotlight. "Mono Monk" is the shortest of the 6 tracks (4:34), the melody and spare piano accompaniment perhaps influenced by the jagged lines of Thelonious Monk. Nothing is rushed, the bell-like piano chords supporting the bluesy baritone exclamations.

This CD only demands that one pays attention - the creative listener will enjoy the journey. 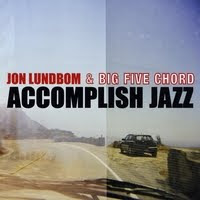 Accomplish Jazz - Jon Lundbom & Big Five Chord (Hot Cup 93) -  On this, guitarist/composer Lundbom's 3rd CD as a leader and first in over 4 years (and his debut on Hot Cup), features long-time associates Jon Irabagon and Moppa Elliott, tenor saxophonist Bryan Murray (his 2nd CD with the guitarist) and drummer Danny Fischer (making his recording debut as a member of the quintet.  The music is spacious and swinging, occasionally raucous and hard-edged with solos that push at the boundaries of the songs.  To this listener, Lundbom's guitar style sounds influenced by both Joe Morris and James "Blood" Ulmer, the former in the way he controls volume and in the movement of his phrases and the latter in the underlying blues foundation of his lines.  "Truncheon" opens the CD and, with a title like that, one might expect it to beat the listener over the head.  But, it's a bluesy shuffle with a long guitar solo that pushes the rhythm section to react in a forceful way and sets the stage for Irabagon's fiery and edgy solo that brings the piece to a close. "Phonetics" starts quietly with a short melody line for both saxophonists that splits and comes back together, then opens for Irabagon's multi-dimensional solo (most of the time over a pulsing bass line.) This time, Lundbom takes the second solo and it moves from quiet, short, phrases to jagged riffs that ring both clear and bluesy. There's a touch of Bill Frisell in the guitar lines that lead the saxophones back in to a reiteration of the opening theme.  I like how this music can be so quiet yet so intense.

The Frisell influence continues with the sweet bluesy reading of the Louvin Brothers' "The Christian Life."  Elliott and Fischer play so economically and clearly beneath the soloists, with the bassist getting a long time in the spotlight near the end of the track.

"Tick-Dog" opens with a long guitar ramble before Fischer makes it a dialogue for several more minutes, raising the intensity level.  Nearly halfway through the 10 minute piece, the rest of the band comes in and Murray blows a long, hot, tenor solo.  The final track, "Baluba, Baluba", rides in on a funky drum and bass rhythm, crisp guitar lines and saxophone lines out of a Stax recording.  Irabagon gets the first solo, flying and sputtering phrases over the hard-edged rhythm section. Then, Murray and Lundbom engage in a dialogue that starts as a good-natuured give-and-take then goes out in a blaze of glory.

Judging by the sounds emanating from this recording, Jon Lundbom and his musical posse had a great time making "Accomplish Jazz."  Listeners with a mind for adventurous music that does not necessarily stick to an obvious format should have great fun making their way through this musical playland.

For more information about these and other Hot Cup releases, go to http://hotcuprecords.com.