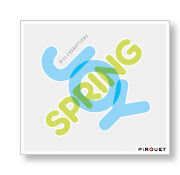 Joy Spring - Bill Carrothers (Pirouet) - Bill Carrothers has issued a number of fine CDs but none as immediately appealing as this trio date.  Flanked by bassist Drew Gress and drummer Bill Stewart, the pianist dedicates this program to the music of the Clifford Brown/Max Roach Quintet.  4 of the tunes are composed by Bud Powell's younger brother Richie, who perished with his wife in the 1956 car crash that also claimed Brown.  Powell never received the acclaim of his older brother but was respected as a composer.  His tune "Jacqui" is a sweet romp, with a two-handed line for a theme and a loping rhythm.  "Gertrude's Bounce" is a sweet little tune with a genuinely happy melody - Stewart's sprightly stick work, especially on the cymbals, is impressive.
On many of his other recordings, the pianist takes familiar material and re-imagines the song. Here, Carrothers radically alters the mode of the title track, abandoning the hard-bop prance for a more abstract and introverted solo piano take.  The melody is nearly unrecognizable until halfway through the piece. The piece is transformed into a lovely, touching, ballad.  "Daahoud" jumps out of the gate atop more fine drum work and Gress's aggressive walking bass lines while "Powell's Prances" opens with a short drum solo before Stewart and the bassist set a blistering for Carrothers' dancing solo.  Gress struts out of the gate on "Gerkin for Perkin", laying down a fast-paced walking line that never lets down throughout.
As tributes go, this one succeeds because of the musicians expansive attitude towards the material - the results are not slimmed-down copies of the originals but, more often than not, imaginative reinventions that allow for personal expression and excellent interplay.  One wants to go back to listen to hear just how good the initial recordings sound and how this 2009 session is just as impressive in its own way.  For more information and a fascinating website to explore, go to www.carrothers.com. 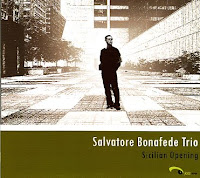 Sicilian Opening - Salvatore Bonafede Trio (Jazzeyes) - It's a tribute to the power of music from the Crescent City that the title track of this handsome CD is a high-stepping romp that one could imagine being created by Allen Toussaint.  However Bonafede has never been to New Orleans yet he has such a fun time dancing over the snappy drum work of Marco Pellitteri and booming bass of Marco Panascia. While nothing else in the program has the unmitigated joy ofthe track, there is some fine creative interplay.  Bonafede displays a much easier touch on "Ideal Standard", a boppish piece with an active walking bass line. He takes a nice blues turn on "Bbbb" and pays more homage to New Orleans on "Wwww."  The latter track shows the influence of Brad Mehldau as do the 2 Beatles' covers, "Blackbird" (the rhythm section pushes the tempo and Bonafede does a fine job just behind the beat) and "She's Leaving Home" ( nice Latin touch in the rhythm under the verses.) The pianist adds a gospel touch to "Italian Ingegno" with strong support from his left hand and rolling right-hand phrases.  There is a beautiful medium tempo track, "Lode al Silenzio", that features a classical melody, fine counterpoint from the bass, and gentle propulsion from the percussion.
With influences from pop music to blues to funky New Orleans, "Sicilian Opening" has a hopeful message in its presentation.  I am impressed by Pellitteri's fine responsive drumming and he makes even the quieter tracks interesting with his work.  Salvatore Bonafede plays well and his myriad interests color his original pieces.  There are a few weaker moments but, overall, this music is a tasty treat.  For more information, go to www.musiceyes.com.
Here's the title track, courtesy of IODA Promonet:
Sicilian Opening (mp3) 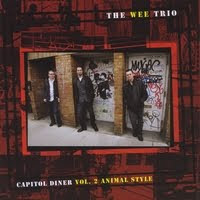 Capitol Diner Vol. 2: Animal Style - The Wee Trio (Bionic Records) - 18 months ago, The Wee Trio made quite a critical splash with their debut CD.  Vibraphonist James Westfall displayed a unique approach to his instrument while the funky-"free"-hard bop rhythms from Jared Schonig (drums) and Dan Loomis (bass) were playful and challenging.  "Volume 2", recorded in New Orleans following a lengthy time on the road, is no less engaging.  The "hell-bent" drive that permeates "White Out" and the funky fire of "Wherever You Go, There You Are" displays the band's chops while there is a exotic feel to "Tig Mack Is back In Santa Monica" (which has a melody line and sound similar to a piece from Max Roach's M'Boom.) A synth sound pops up on that last track as well as on the hard-driving "Pinball Number Count." On initial listen, the "strange" sound is a bit off-putting but eventually one realizes it's actually a smart textural move.  With the exception of "Avril 14th" by Aphex Twin, "But Beautiful" by Jimmy Van Heusen and the afore-mentioned "Pinball Number Count", composed by Walt Kraemer for the "Sesame Street Number Count", the band each brought in pieces. They compose to each other's strengths, the deep, rich, sonorities of Loomis's bass, the hard drive and propulsive quality of Schonig's drums and Westfall's melodic flair (his "Snow Day" is a highlight.)  "Animal Style" shows The Wee Trio has grown since its debut and there is still room for more.  For more information, go to www.theweetrio.com. 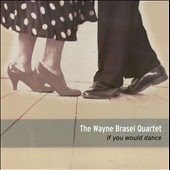 If You Would Dance - The Wayne Brasel Quartet - (Brasjazz Records) - Guitarist Wayne Brasel must be quite a model citizen in his adopted home of Stavanger, Norway.  A native of Northern California, Brasel is now an associate professor of music and heads up the jazz guitar department at the University of Stavanger.  Brasel received, in his words, "generous financial support" from the Cultural Commision of Stavanger to create this program. His new CD features a smashing rhythm section of Tom Warrington (acoustic bass) and Peter Erskine (drums) plus the empathetic and sympathetic support of Alan Pasqua (piano) - percussionist Satnam Ramgotra appears on "The Hermit."  First thing one notices is how melodic the music is and how few hard edges the pieces have.  Brasel has a soft, round, tone on electric guitar, not unlike Pat Metheny, with a little country twang now and then (especially on the title track.) This is music to cuddle up with, to let wash over you, whether it's the gentle hard-bop of "Celebration" or the folky exploration of "The Hermit", with the tabla beneath the acoustic guitar and Pasqua's open chords.  The one non-original, "Oleo de Mujer con Sombrero" composed by Silvio Rodriguez of Cuba, is a lovely melody rising gently over Erskine's ever-so-quiet brush work.  It's as if time does stand still during both the piano and acoustic guitar solos. "A Heart on Fire" displays the fine interplay of the drums with the soloists as well as bassist Warrington's bouyant bottom lines and occasional counterpoint.
Wayne Brasel's music on "If You Would Dance" is the perfect antidote for times of trouble or sadness. The music offers no answers to hardships but gives musical succor when one needs to take things slowly.  Well-played, smartly arranged and heartfelt music, take your time and surrender to these sweet sounds.  For more information, go to www.waynebrasel.com.